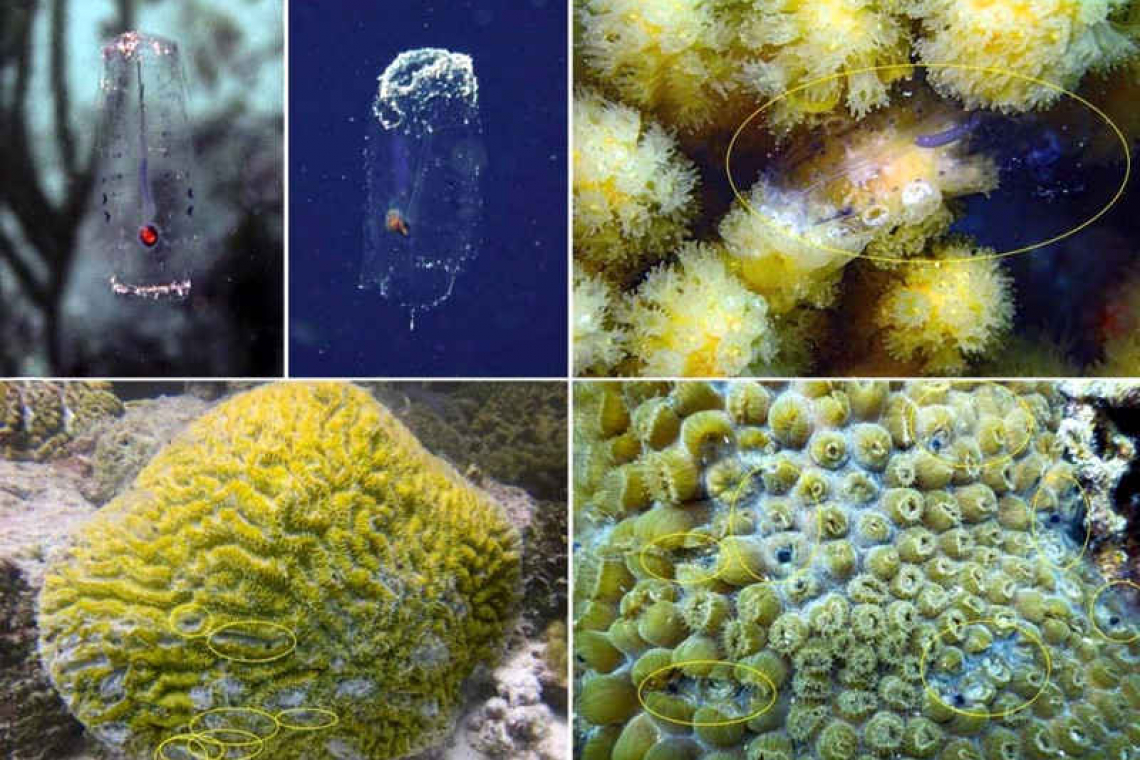 WILLEMSTAD--In July of this year, three types of corals were spotted on Curaçao that were digesting salps. They were found in Directeurs Bay – east of the Caracas Bay area. The find sheds new light on coral food sources, writes Nature Today.

Salps are gelatinous, barrel-shaped tunicates. Multiple salp bodies can be linked together, forming entire colonies. They can move pumping through the water column. In the past, fish were thought to be the main predators of salps. However, new information is emerging about coral predation these days.

Little information is available about salp-eating corals. Because they are relatively large, coral predation was believed to be limited to corals with polyps with mouths larger than a centimetre, large enough to swallow an entire salp at once.

But observations from the Mediterranean have shown that polyps of smaller-mouthed corals work together to digest larger catches. This indicates that salps can be an important food source for many different coral species.

In July of this year, a swarm of these salps was spotted in Directors' Bay on Curaçao. Lars J.V. ter Horst, a student at the University of Amsterdam, also found trapped salps between three different hard coral species: Madracis auretenra, labyrinthine coral (Meandrina meandrites) and Montastraea cavernosa.

He contacted Naturalis and the University of Groningen, which has previously published on salp eating corals in Malaysia and Thailand. Then they released a report together.

Important, as this was the first sighting of Madracis auretenra and maze coral as salp eaters. In addition, these findings suggest that these swarms may be a more common and widespread food source for corals than previously thought, as salp swarms are commonly observed in the Caribbean.

These findings provide an interesting new insight into the ecology of coral reefs and the importance of salp swarms as a food source. As coral reefs continue to come under increasing pressure, a more holistic understanding of their dynamic ecosystems will be crucial to preserving coral reefs.