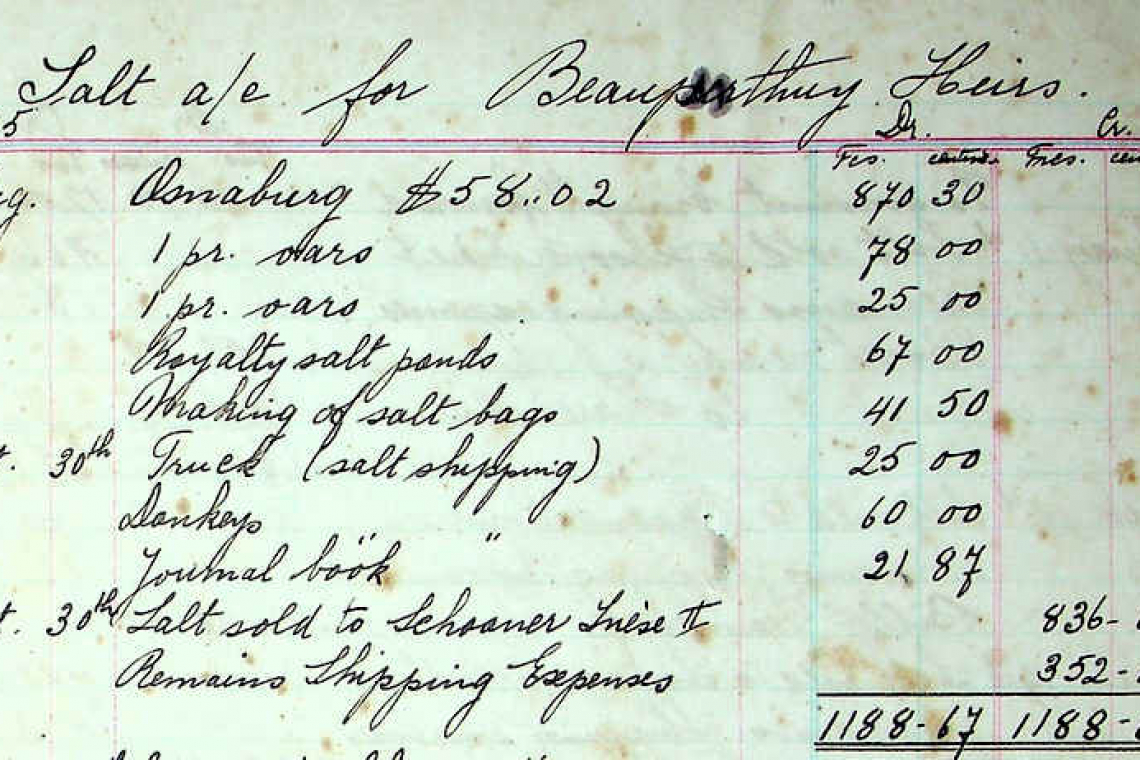 A clothbound ledger from Pierre Beauperthuy’s collection has “Beauperthuy Heirs Salt Sales and Expenditures” written on the cover in faded ink. Inside, there are tall columns of income and expenses. Though it doesn’t have the thrill of a great novel, perhaps there are some stories hidden between the lines.

The first section is a tally of purchases and salt sales. It starts in August 1935. Some of the first items include a pair of oars that costs 78 francs, and another pair that costs 25. The first income noted was salt sold to the schooner Inèse on September 30. These entries continue for 15 dense pages, ending in April 1950.

This ledger tells a lot about the economics of salt production. Royalties are paid for the salt ponds and profits are paid out to shareholders. Costs for purchases like paint, rope, hoe picks and even a journal are recorded.

The ledger also gives us a sense of the ebb and flow of work on the salt pond. Salt is sold to various boats throughout the year. For each ship, there is the value of the salt and of “shipping expenses” which probably covered the labour of bagging the salt and loading it onto the ship.

The names of the ships are recorded for each sale. Inèse I and Inèse II, Nina and Nina II, and Louisa B come to pick up salt many times over the years. Ships like Javeline and Restless only appear once in this ledger. Each ship leads to a unique story of maritime trade and the connections between islands.

A few entries in the ledger leave us with little mysteries. On September 30, 1936, there is a 25-franc expense for “Truck (salt shipping)” and a 60-franc expense for “Donkey”. Was this a moment when machines were taking over the work done by animals? On December 30, 1937, some 54 francs are spent on a trap door. Where was that, and is it still there?

If you want to take a closer look at this journal, visit http://soualibra.com and go to the Archives page to download it.