St. Maarten’s Backyard Astronomy for April 9-11: Looking up at the Night Sky 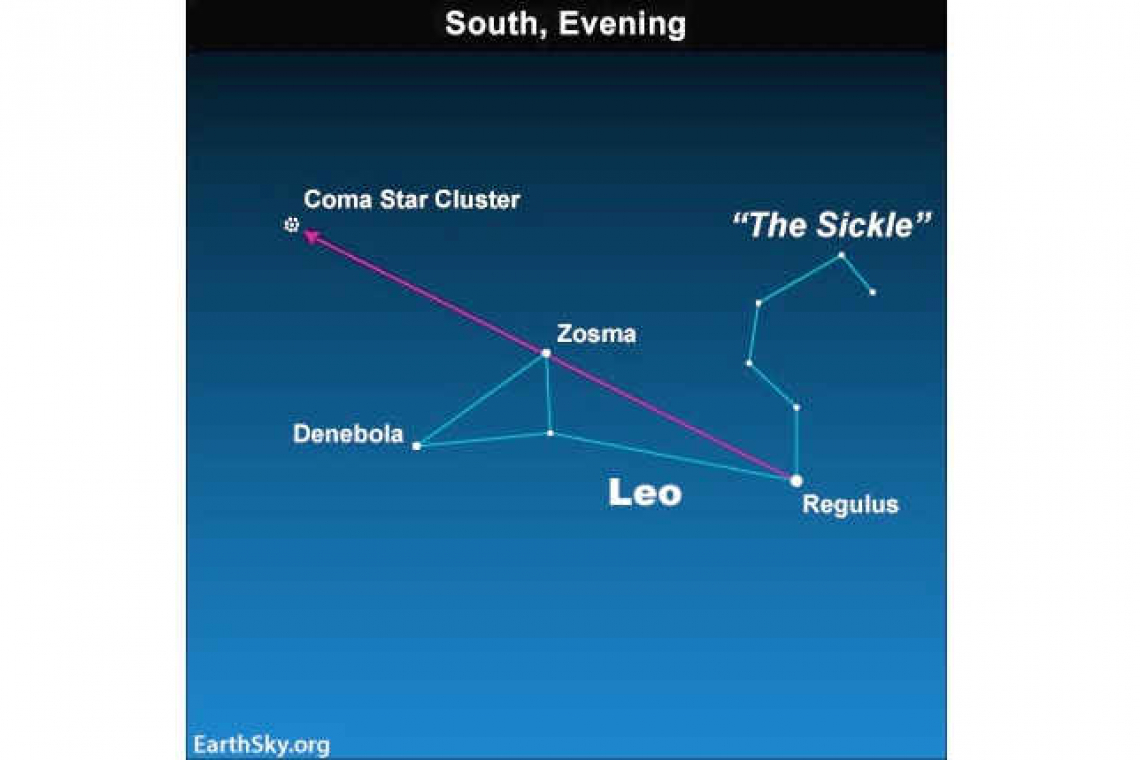 This weekend, look for the constellation Leo the Lion high overhead in the night sky at roughly 9:00 to 10:00pm local time. You’ll see the Lion at nightfall, too, though lower and more in the eastern portion of the sky. His curved mane resembles a backwards question mark, also called the “sickle,” and his tail can be seen as a triangular shape. Denebola, the name of the outermost star in the rear triangle of Leo, is an Arabic term meaning the Lion’s Tail.

Leo’s tail points towards a star cluster that may be a new point of interest for you in your star gazing adventures. It’s a beautiful sight through a pair of binoculars or a telescope – well worth taking the time to pick out in the night sky.

You can see Leo easily, even in a bright full-moon sky, but you’ll need a dark sky to find the cluster. Luckily this weekend, moonlight is not an issue. Do try to escape the glare of street lights and illumination from nearby buildings. Then try the “star-hopping” technique shown in the diagram to let Leo lead you to the Coma cluster. Basically, you can draw a line from the bright star Regulus through the top star of the tail, and then continue on about twice that distance. Search this area of the sky for the cluster.

Here’s an interesting fact: Long ago, the Coma star cluster was located right at the Lion’s tail. Nowadays, this part of the sky belongs to another constellation, Coma Berenices or Berenice’s Hair. The slow shifting of stars across the sky takes millennia – the result is that for much of human history, the stars do appear fixed and unmoving. As the universe slowly expands, the relative position of the stars shifts incrementally.

When I was studying astronomy in university, much attention was given to this expansion of the universe. It can actually be measured, and has been, ever since it was originally observed by Astronomer Edwin Hubble in the 1920s. He discovered that all the visible light from all the stars was “red-shifted.” Visible light behaves in this way, much like sound waves do. Every little child can almost instinctively mimic this effect, when he or she imitates a train, car or motorcycle passing by at a fast speed. The “vroom” sound has a drop in pitch as the vehicle passes by the stationary observer. This is caused by the sound waves being compressed ahead of the moving object (blue-shifted) and then the sound waves stretch out behind the object as it recedes away (red-shifted). This is called the Doppler Effect (see image).

It’s similar to how water is pushed ahead of the bow of a fast moving boat and the wake stretches out behind the stern. Anyway, the evidence of an expanding universe is the basis for the Big Bang Theory which, in addition to being a funny TV sitcom, is a well-accepted theory that postulates the entire universe began as a singular point of infinite density. More about this mind-blowing theory in next week’s instalment of Night Sky. In the meantime, keep enjoying the wide world of natural phenomenon all around us.