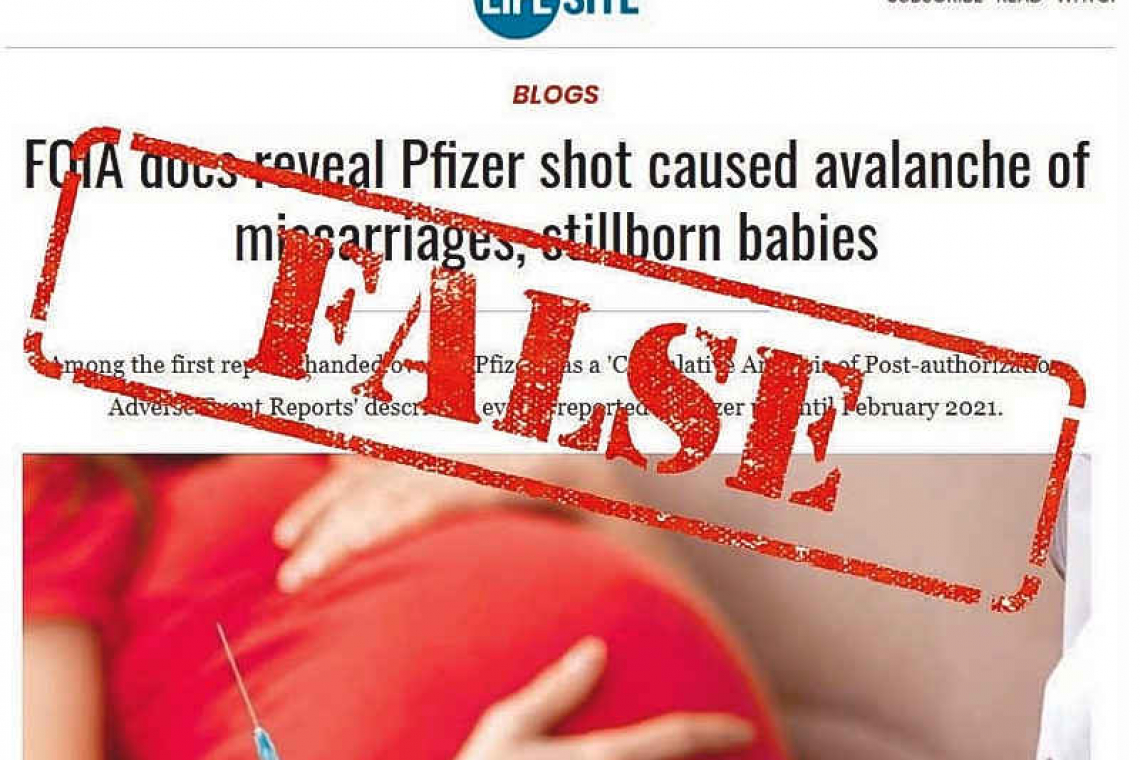 Allegations that all babies of pregnant women who received the Pfizer-BioNTech COVID-19 vaccine during its early rollout died are unsupported.

A document from Pfizer-BioNTech entitled “5.3.6 Cumulative analysis of post-authorization adverse event reports of pf-07302048 (bnt162b2) received through 28-feb-2021” has triggered misleading claims online about the COVID-19 shots in pregnant women.

The document and its data

The document was submitted by Pfizer-BioNTech as part of its Biological License Application (BLA) to the U.S. Federal Drug Administration (FDA), Alison Hunt, an FDA Press Officer told Reuters via email.

The BLA is a request for permission to introduce or distribute a new biologic product across states. The FDA reviews the information in the BLA “to make sure the vaccine is safe and effective and meets the FDA’s standards for approval.”

This document looked at adverse event reports from Dec. 1, 2020, through Feb. 28, 2021 from 63 countries. Most reports came from the United States and the United Kingdom. Table 6 specifically refers to adverse events reported in pregnant or lactating women who received the shot (see page 12*).

The data was collected from surveillance systems like the U.S. government’s Vaccine Adverse Event Reporting System (VAERS), or the UK’s Yellow Card Scheme as well as “cases published in the medical literature, cases from Pfizer-sponsored marketing programs, non-interventional studies, and cases of serious AEs reported from clinical studies regardless of causality assessment,” the document states.

It is key to note that the document does not provide the total number of pregnant women – or people in general – who received a shot during that period; making it impossible to calculate the percentage of pregnant women who reported an adverse effect or, in this case, had a spontaneous abortion following vaccination compared to a larger total.

Based on this document, articles and social media users are claiming that “100%” or “87.5%” of babies of pregnant women receiving the shot during the reported period “died”. Articles appear to have reached these conclusions by considering the “known outcomes” as the total or the 100%, but this is inaccurate.

Part of an article by Lifesite news reads: “Were 28 of 32 known pregnancy outcomes actually fatal in the first 10 weeks that the vaccine became available, as their report suggests? That’s an 87.5% pregnancy loss rate? And only one pregnancy outcome was ‘normal’?”

Emily Adhikari, assistant professor at the Division of Maternal-Fetal Medicine at the University of Texas Southwestern Medical Center told Reuters via email that she considered the articles to erroneously assume the 238 pregnancies that did not provide an outcome at the time of reporting had a negative outcome.

Instead, these pregnancies were ongoing at the time of reporting, disproving the argument of the articles.

Reuters also presented the document to Viki Male, lecturer in reproductive immunology at Imperial College London who said adverse event reports, such as the ones highlighted in the document, “do not necessarily imply that either the doctor or the patient believes the event was caused by vaccination – only that it occurred after vaccination.”

Moreover, the number of cases of pregnant or lactating women only in the United States reported in the document (205 out of a total of 413 global cases) is “a very small fraction” of the total number of pregnant people who had been vaccinated in the country by then, Male said, pointing to data by the U.S. Centers for Disease Control and Prevention (CDC).

At least 34,494 pregnant women in the United States had been vaccinated by Feb. 16, 2021 per CDC data archived here. The cited Pfizer/BioNTech report accounts for reports through Feb. 28, 2021.

The U.S. Centers for Disease Control and Prevention (CDC) recommend COVID-19 vaccination and a booster shot for women during pregnancy, breastfeeding, or women trying to get pregnant or who might become pregnant in the future. The World Health Organization (WHO), the British National Health Service (NHS) and the European Medicines Agency (EMA) have issued similar guidance. Health authorities stress that pregnant women with COVID-19 are at higher risk of experiencing severe disease and pregnancy complications, such as preterm birth or stillbirth.

Reuters previously debunked claims that a CDC study proved 80% of pregnancies would end in miscarriage after vaccination.

Recent Reuters reports on vaccination being safe during pregnancy can be seen.

Misleading. The document, which is looking into adverse reports between Dec. 2020 and Feb. 28, 2021 is part of Pfizer-BioNTech’s Biologics License Application to the FDA. It does not provide evidence that all pregnant women who received the shot in the reported period lost their babies.

*This article was produced by the Reuters Fact Check team. Read more about its fact-checking work at https://www.reuters.com/fact-check/about. For the original article with several links to the sources mentioned, including the documents in question, social media posts and statistics, visit Reuters.com.