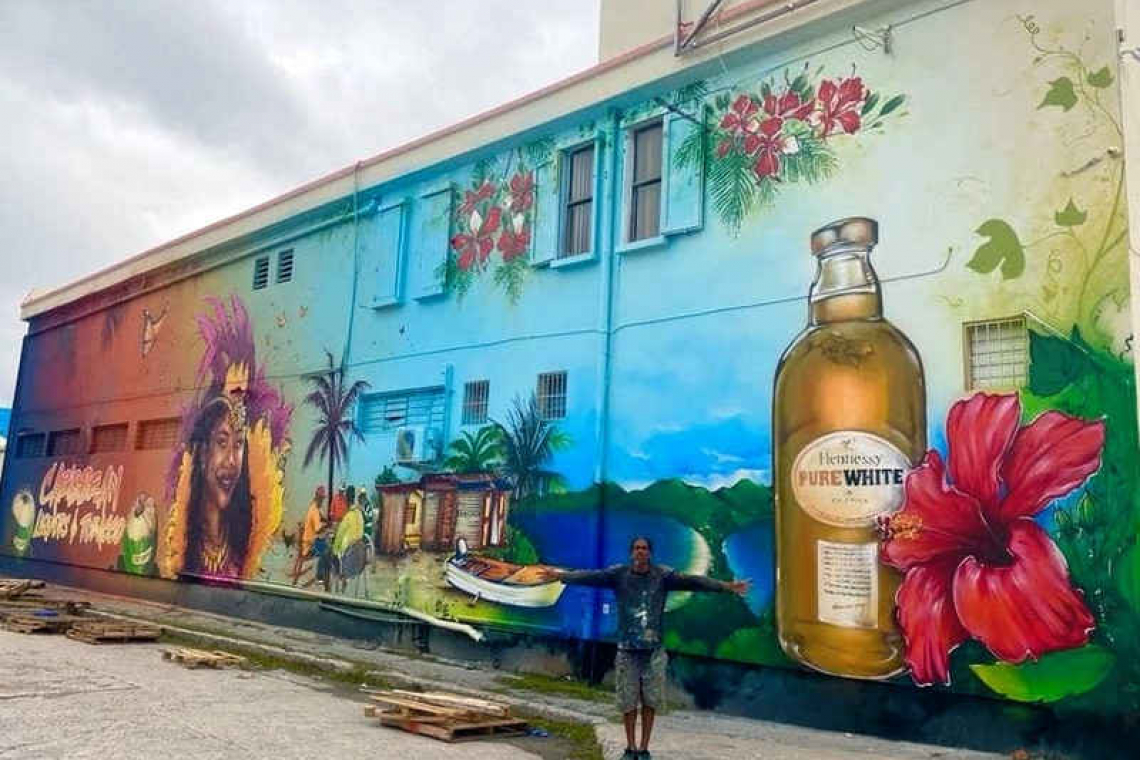 Anyone wandering around in Philipsburg lately might have spotted one of its newest artistic gems, a colourful and intricate mural by none other than Jimmy Sheik of the Madtwoz Family Association, done in collaboration with Caribbean Liquors and Tobacco (CLT) – part of a unique promotion for Hennessy Pure White.

CLT contacted Sheik for the promotional art project, because he is widely known for his unique art style, which can be appreciated and recognised on walls all around the island.

Wanting to spread nothing but good vibrations, especially after devastating Hurricane Irma in 2017, Jimmy set out to beautify and inspire through his art. He loves mixing colours and creating elaborate designs, with a strong Caribbean touch, as he described it to The Weekender. Hennessy Pure White likes to work with local artists and companies, a CLT representative told The Weekender – so this was a perfect match.

Lots of local imagery is worked into the impressively large mural, which spans the entire side of the CLT building along the alleyway connecting W.G. Buncamper Road to Voges Straat. In fact, it is the largest mural that Jimmy has ever painted on the island, he said. With help from his association with the preparation, he executed the project on his own within a week.

Alongside the company name and a Hennessy bottle, lots of local elements are woven into the design, from red flamboyant and hibiscus, to a fishing boat, coconuts, greenery, men playing dominoes, and the recognizable sea-land-and-pond eagle eye view of Phillipsburg. Anyone familiar with the artist’s work will also spot the signature Monarch butterfly, floating above the scenes.

The dominoes depiction was actually recreated from a picture taken by Sheik in Marigot. The coconuts are not just a nice tropical addition to the scene, but also tie into the refreshing and popular combination of Hennessy with coconut water. Well known for his portraits, Sheik also included a beautiful portrait of a young lady in vibrant carnival gear – and so continues the beautification of Philipsburg through art.