Ms. Sally: ‘A compassion for children is something that doesn’t leave you’ 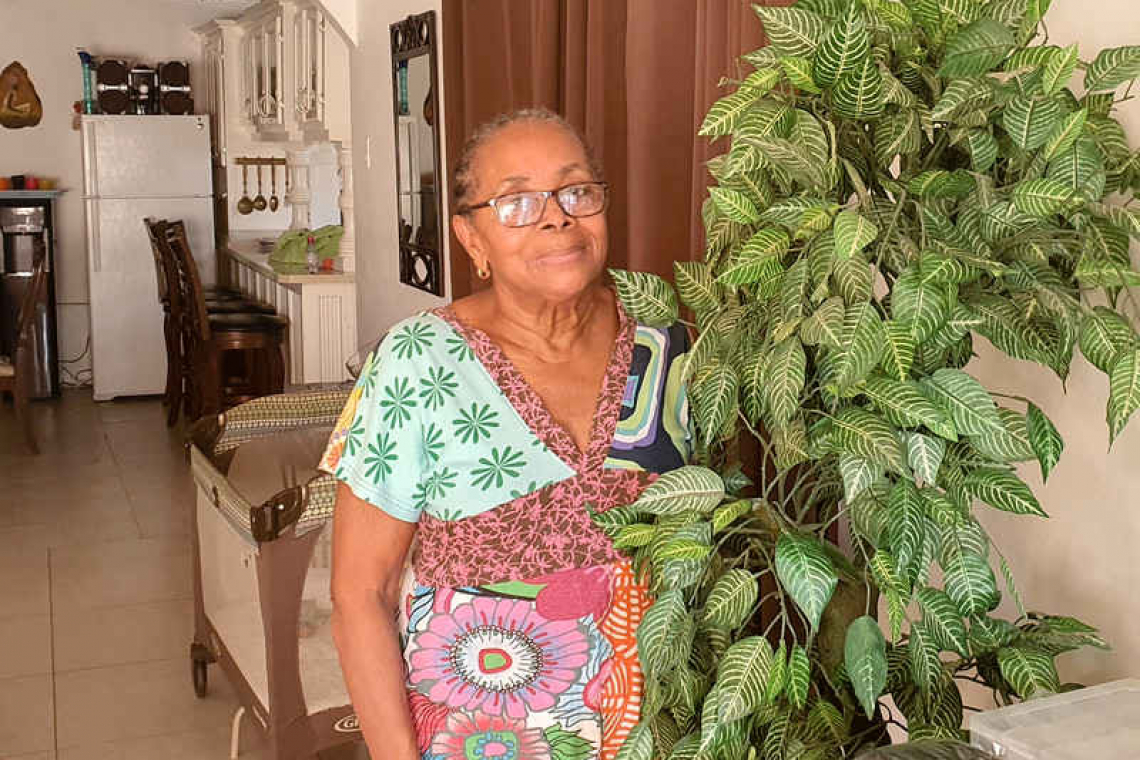 Little boys exploring the yard, preteens chatting and reading together, tiny tots corralled in the safety of the living room, bouncing around in their walkers – this large, organised home on the hillside just seems to house one very, very big family. And that’s how Ms. Sally, who the kids call Grandma, likes it. Anyone remotely familiar with foster care on St. Maarten would recognise the name, and it would have come as no surprise that she be named foster parent of the year by Foundation Judicial Institutes St. Maarten SJIS in its first Foster Care Month awareness campaign.

Sally, whose real name is Veronica Benjamin, doesn’t care too much for the word “foster”, as she doesn’t like the stigma attached to the word. The kids call her Grandma both at home and on the road, which feels familiar and can prevent unwanted questions. “I don’t say ‘I have a foster home’, I always tell people that ‘I have children living with me,’” she told me in an interview at her home.

At the same time, this is arguably the only “real” foster home on St. Maarten – the place that reliably says yes to children in need of a safe and welcoming home, be it for the short term, long term or on an irregular basis at times. A total of 22 children now reside here – sometimes 25 on the weekends. At one point, it had been 25 full-timers.

This is, by the way, her private home – and it was by chance, not by design, that it was built as big as it was. The house was larger than it was originally intended to be, the rooms a little oversized. Recalling this led her to reflect: “Whatever is your calling, don’t pass it; whatever is written for you.” It was one of the things that enabled her to be able to take care of many, now along with a small team. Together, they provide childcare, cook, clean, and keep the kids on track

Sally always says yes when asked by SJIS to take in another child, and she makes the most of any resources available. However, this is just one home, and St. Maarten is in urgent need of foster families. This message has been central in the awareness campaign run by SJIS this month, where the foundation is hoping to recruit more full-time and part-time foster parents.

“I am getting older; we need the younger people to start doing what we’re doing,” shared the 71-year-old. Her late husband Edward Benjamin, who played a very active role in the home, unfortunately passed away a few years ago. Sally would like to see the torch passed on, and is mentoring another person who has taken in three children and hopes to accommodate more in the future. On a positive note, a new youth residential home will be opening in the upcoming weeks – increasing St. Maarten’s capacity to care for foster teens from age 13.

Sally keeps an open door to foster/ adoptive parents that need help or advice – especially to the kids she’s known for years. “They can reach out to me anytime,” she said, as the kids are never forgotten. “And I like when they communicate with me so I know the child is happy; I know what’s going on and I can try to assist and help in whatever way.”

The topic of being able to reach out came up, when I asked what advice could be given to potential foster parents that may not be confident in fostering or adopting.

Most importantly, she says, is to not rush into it. It’s a better idea to sign up to foster on weekends, and to make visits first. This gives a child the chance to become accustomed to the adult. Then gradually, the child can be introduced to family, the home, before any transition is made. Keep in mind, of course, that they may already feel upset or unwanted, have already moved in order to settle into a new home, and moving again can be another hurdle.

Another piece of advice is to not go by what others say when it comes to foster-care stories. Some people may have a problem with a child, but when she receives the same child into the home, she doesn’t have the same problem. Give nine- and 10-year-olds a chance; they need help too, she offered. Often, people only want to be foster parents to babies, but most of the kids in the system are older.

Growing up with compassion

Sally learned how to care for herself and others from a very young age, as she was one of her parents’ first children. Counting all children on both sides, she has 27 brothers and sisters. While growing up, living with her aunt, she often worried about her brothers and sisters getting what they needed, and would “accidentally” leave clothes and other items behind that they could use.

Pretending to forget things there was a cover-up so that her aunt, the provider, wouldn’t know. But as she got older and her aunt would buy her multiples of the same items, she realised that her aunt had known all along what she had been up to.

Her aunt raised her to be responsible and independent, establishing a routine and including her in budget planning from around age 12. Sally now does much of the same for the children under her care. The children are responsible for chores, have fully planned days that include school and play-time, and are included in talking about money from about the same age as she had been.

Some of these kids will age out while still in the system, especially since more could be done in terms of regulations/laws when it comes to facilitating adoption, to put it mildly. In any case, the kids are preparing for life as an adult, beyond the home.

After her aunt died, Sally moved back home with her mother. When her mother took ill, she proceeded to raise her younger siblings, right up until the last little brother finished school. “I learned to have that compassion for children. I never wanted my brothers and sisters to need the things that I had. And, you know, that’s something that doesn’t leave you.”

This engrained sense of compassion for children led her down this path, although it had not been the plan to run St. Maarten’s only de-facto foster care home.

Born in St. Vincent, Sally grew up in Trinidad, and first came to St. Maarten on vacation in 1970. She connected with the gentleman who drove her to the airport, and he eventually asked her to return to the island and marry him.

With two kids of their own, the couple also opened their home to other children, often those who didn’t need a place to stay full-time, but could come over for homework after school. Eventually, three siblings needed a place to stay for a period of time. When the couple moved to the current location, it was only with her own kids and a niece.

There was an urgent call for help when the Crystal Home was at risk of losing its accommodation and she offered to help, but the situation was resolved before that became necessary. Soon after, some 24 years ago, SJIS asked if they could take in a young teenage girl – and that was the start of working with the foundation. Upon hearing about four more children – siblings in a difficult home situation – Sally called SJIS and asked that they all be placed with her. The rest, as they say, is history.

Some of the same siblings that Sally helped to raise now pay it forward – making a big difference to the home. Between their support, and that of SJIS and kind-hearted donors, the team is creative in making sure there is enough for every child that it can take in. While it is fortunate that this has been able to work, St. Maarten cannot overly depend on this arrangement, and more foster parents/homes are needed to care for the island’s youth in need.