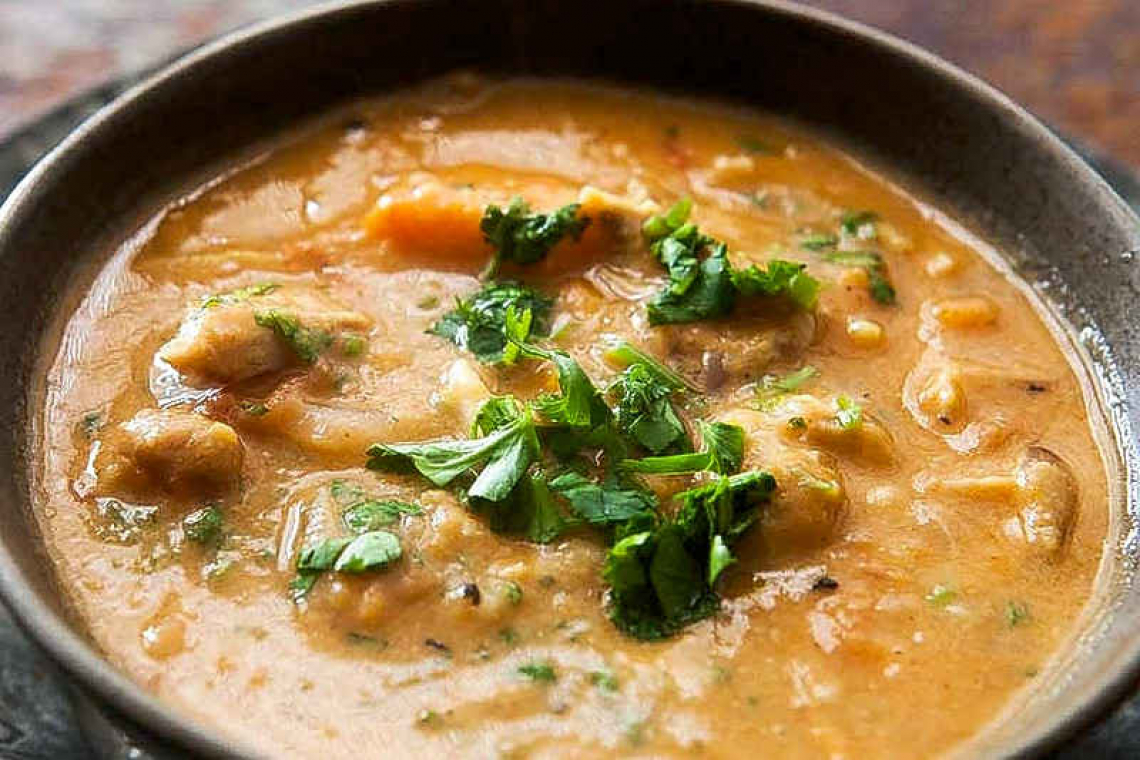 A dear friend asked me to give her a recipe for an African dish made with peanuts she enjoyed as a youngster living over there. While neither of us knew each other back then, we are brought closer by the fact that we enjoyed similar dishes when growing up.

There are many other similarities one experiences as a youngster that will give a sense of “knowing” the other person better, having only just met them, when one finds out that life experiences were similar, if not the same. But food is certainly an experience that brings us all together.

The peanut dish from Africa is a stew. We can grow peanuts on island with success. The raw nut can be frozen so will keep a long time. Tasty though peanuts are, there are some folk that are highly allergic to peanuts.

It appears that the peanut originated in South America (Brazil or Peru) and only reached America after the nut had travelled via Spain to Africa. The Spanish conquistadors took the nut back to Spain. They found that the people (Incas) in South America were making pottery shaped like peanuts and that the decoration markings were peanut shaped, but no actual fossil records have been found to prove that the peanut was around at least 3,500 years ago. The Spanish found that peanuts were growing in Mexico too.

The Africans fell in love with the peanut. They believe that the peanut plant possesses a soul. The nut was secreted in the few possessions the slaves had and taken to America. There the peanut took off eventually into the huge, profit making business today. The catchy slang name for a peanut – “goober” – is derived from the Congolese name for peanuts – “nguba”!

The peanut did not take off originally in America as much of a food for humans; it was thought to be an excellent food for pigs. By the 1800s, peanuts were used to make oil and food; and were used as a substitute for cocoa during tough times. The wealthy thought it beneath them to eat peanuts: “These nuts,” they said, “were only good enough to feed the poor!”

By the turn of the century, farmers had made inroads growing and harvesting many different crops. Being a very time-consuming crop to grow, the humble peanut benefited from the new labour-saving farm equipment being invented.

In our gardens here on island, we can grow a good supply easily with the right soil. It is easy enough to dig up a bushel or two with a garden fork, separate the dirt and the stems/leaves from the plant, and set the nuts out to dry. The next step is to get the nuts out of their shells and freeze them raw or roast them. By the time we have gone through the above process, we should have a bag large enough to last a year. The leaves and shells are excellent turned back into the soil as compost.

Of course, this sort of gentle (or is it genteel) gardening is not conducive to producing the thousands and thousands of nuts consumed in America along. By the mid-1900s, equipment invented for planting, cultivating, harvesting and picking peanuts from the plants was being used by many a farmer. Other machinery was made that could shell and clean the actual kernels. Mechanized machinery simplified peanut harvesting and processing and the peanut boom hit America.

Vendors sold peanuts in the streets, at football games and circuses that came to town. Demand rose for roasted and salted nuts, peanut butter and sweets made with peanuts like fudge and brittle and for peanut oil. The humble peanut is used in more than 300 ways, not only for consumption but also in shoe polish and shaving cream – no don’t eat those products. Peanut plants are excellent in horticulture; they are found to help control the dreaded boll weevil scourge many farmers experienced and give excellent nutrients when turned back into the soil.

(The boll weevil is a beetle that feeds on cotton buds and flowers. Thought to be native to Central Mexico, it migrated into the United States from Mexico in the late 19th century and had infested all US cotton-growing areas by the 1920s, devastating the industry and the people working in the American South. ~Wikipedia)

Watching the harvesting on peanut farms is interesting, mind boggling if you have not seen this before. A large machine is driven over about four rows of lush growing peanut plants. There is a blade that goes down into the soil and hefts the plant to the surface, nuts and all.

The plants are left to dry for a couple days, then another large machine is driven over these rows of semi dried plants. The machine separates the nuts from the leaves and stems, either digging these back into the dirt, or another machine comes along and turns the leaves and stalks into huge bales to be used as fodder.

The peanut is not a nut!

It is, in fact, a vegetable that belongs to the legume family – legumes that include peas and beans! The peanut requires about 120 days to mature.

Planting peanuts in our gardens

Peanuts need full sun. Growing peanuts at home is surprisingly easy, as the plants require minimal care. Once you have acquired a handful of raw peanuts, you can plant them either in their shells or husked. NB - If you choose to husk the peanuts, make sure to leave the thin, pink/brown layer covering the seed.

Sowing outdoors – peanuts need loose, well-drained soil – add sand and compost to loosen the soil if needs be. Sow one to two inches deep, with around six to eight inches between seeds.

When a peanut plant is about a foot tall, hill the earth around the base of the peanut plant. Long, pointed pegs grow from faded flowers and then push one to three inches down into the soil beside the plant. A peanut will form on the end of each peg.

If you’re growing peanuts inside, you can use a large four-inch-deep plastic bowl. Fill the bowl with moist potting soil. Shell at least four peanuts, and place the seeds on the top layer of soil. Cover the seeds with an inch of soil, and the plants should sprout in a few days. Place the plants in a full-sun location.

The crop is ready to harvest when leaves turn yellow and the peanuts’ inner shells have gold-marked veins. Don’t wait too long to harvest your plants. If you wait too long, the nuts in the ground will start sprouting again. To harvest, dig around the plant a little to loosen the soil, then pull the entire plant from the ground.

Gently lift the plant from the ground. Lay it out to completely dry with the leaf side on the ground for a few days to a week or so. After it is dry, pull the peanut shells free.

My grandmother must have had a near heart attack as she was quietly doing her grandmother thing in the vegie garden when our “cook boy” came screaming out of the house brandishing a machete, and like a true hero pushed her behind him and slaughtered a large mamba snake! It was in that garden that the peanuts were grown. I prefer to make this dish in the African Potjie (three-legged potbelly cast iron pot).

2 TBL oil (peanut oil, but you can use olive)

80g smooth peanut butter (use home grown nuts and process – in the old days, they were ground through a mincer machine by hand)

1 fresh chili or to taste (seeded or not, depends on the heat you like)

30g peanuts, roughly chopped – toasted in a little oil in a frying pan

(Variation: you can also chop; and add carrot, spinach, another onion, bay leaf, a large tomato)

Set aside in a bowl.

Meanwhile, mix the peanut butter with the hot stock until smooth, then set aside.

Add remaining oil to the pan.

Stir fry on high until the chicken is golden.

Add butternut, pepper and the stock.

Simmer 20 mins until the sauce thickens.

Stir in fresh coriander and peanuts.

Serve with coconut rice (Basmati cooked in salted coconut milk and water with a cinnamon stick and cardamom seeds and peanuts).