Facing Mountains: Conquering the Kilimanjaro in honour of Paralympic brother 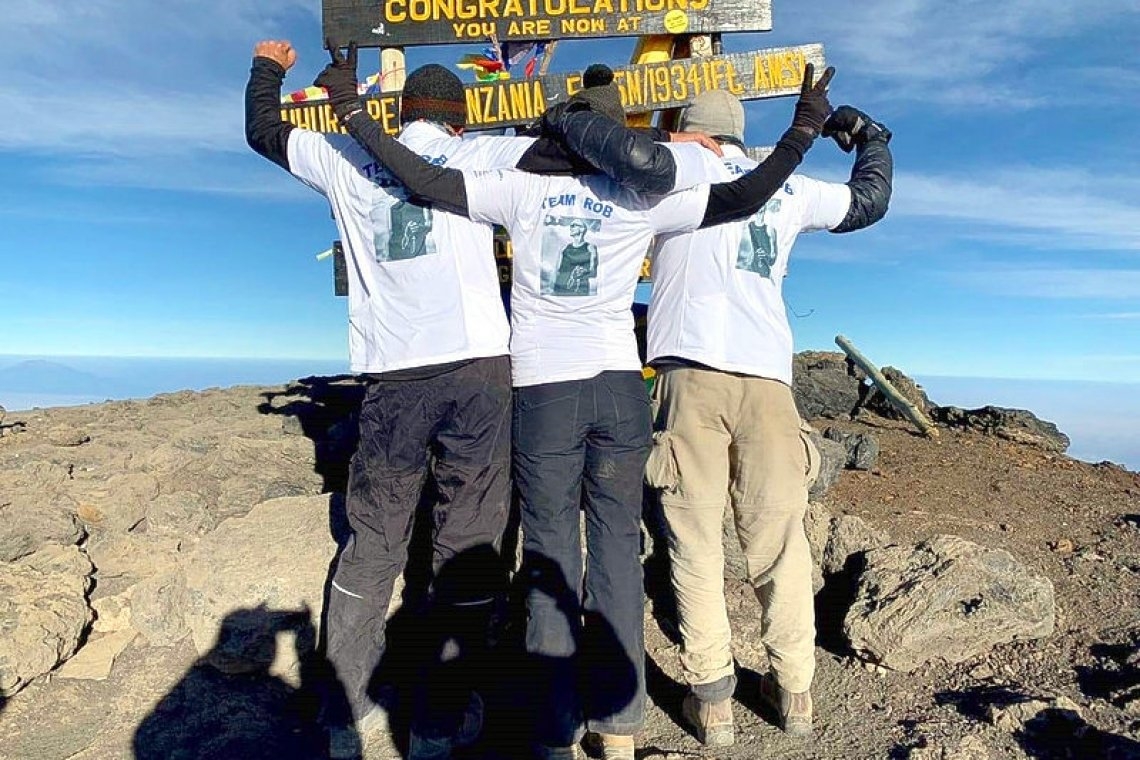 Imagine climbing the African Kilimanjaro – the fourth highest peak in the world at almost 20,000 feet – that’s about 10 times Saba’s Mount Scenery. Then imagine doing all this in honour of your brother, the fastest blind runner in the world, who passed away after an 18-month battle with the most aggressive form of brain cancer. That already sounds like a huge accomplishment, but the story gets better! In doing so, you also manage to raise $3,000 for the desperate animals of St. Maarten. It would seem unimaginable for most, but not for Suzan Angelini, who told us her awe-inspiring story over a cup of coffee.

Can you tell us more about this incredible climb? How did it all start?

My brother Robert Matthews was a Paralympic athlete. He was casted as the fastest blind runner in the world and was the first Paralympic to receive the prestigious Most Excellent Order of the British Empire (MBE) award from Queen Elizabeth. In 2016, Rob was diagnosed with brain cancer. I have always wanted to climb the Kilimanjaro, and he said he was going to do it with me when he beat the cancer. Unfortunately, he passed away in April 2018, after I had been in New Zeeland nursing him for five months.

At the funeral, his wife challenged everyone to do something outside of their comfort zone in Rob’s honour. So people started doing certain things: his wife started training for a half marathon; and I decided that I’d like to climb the Kilimanjaro in his honour. It was also a healing move because it gave me something to focus on to help me get over the worst grief. So I contacted Matt and Paul, two of his guide runners and dear friends. We decided to do it together and that was the start of an amazing and emotional trip. Then, at the last minute, my friend’s daughter Alex decided she would like to do it as well, so it was four of us in total.

When was the actual climb?

We did it in September last year. I have always worked out, but Desiree Winkel trained me specifically to help with the altitude. We would go hiking and she would also have me doing all sorts of exercises in the gym with a mask on. And whether or not it helped with the altitude – because that’s the point, you don’t know until you get there – it definitely strengthened me. But I think the hardest part of climbing a mountain is the mental component. It was a very emotional trip, but I am so happy we did it. And raising money for the animals as well as doing it in memory of my brother…

Yes, because you got sponsors and made donations to several animal welfare groups on the island: SXM Animal Rescue Team, SXM Paws, Animal Defenders and I Love My Island Dog. Is there a link between your brother and the animals?

Robert has always been an animal-lover. He had guide dogs most of his life, so he especially loved dogs, but really all animals in general. So I thought it would be a good concept to put money together for animals in his honour. I also thought about giving it to Guide Dogs for the Blind, but I wanted to stay away from all that and also give something back to the island. I have lived here for 32 years and Robert loved it here – he visited nine times. So that’s how I came to the decision to do it for those four local animal charities.

And what was it like to accomplish all this? I mean climbing the Kilimanjaro in honour of your brother is an incredible achievement.

It is. It’s funny when you read up on it. Some people say it’s the hardest thing they have ever done; other people weigh 250 pounds and never exercise and they can somehow do it. I don’t quite get that because the first day of the climb, I wanted to give up after the first five minutes because you start climbing up straight away. Not only was I the oldest person in the group; I was even the oldest person on the mountain that week – which should have made me feel better, but it didn’t – I was like, “Oh God!” Alex, the girl that joined us, was only 21 and was used to high altitudes, so she was very fit. Then the two guys – Matt, who lived in New Zeeland, can cycle 200 miles and he runs marathons, and Paul as well – they are not just fit, they are actual athletes. I was definitely the weakest link out of us, and I am not used to that; so that was a bit of a challenge.

What about the altitude?

The funny thing about the altitude is that you never know. Matt, who was probably the fittest, actually got really sick on the third day and he did not think he was going to make it. Thankfully, he felt a lot better after the anti-altitude medication. Still, when you get up that high, it affects you, especially in the last 500 metres. Many people stop at the stellar point, which is 150 metres from the summit top. I think they said 60% of people finish at stellar point, because they still get the certificate that they climbed the Kilimanjaro. Those extra 150 metres took us over two hours and that was really hard. You would have to stop and catch your breath every 15 metres. Afterwards, our guide told us that the last leg can sometimes really affect the mind: People go crazy and cannot remember what happened afterwards.

So it really was something outside of your comfort zone!

It was, but I loved it, to the extent that I am doing it again – a different route this time, though. Two women I know have also lost someone due to brain cancer, so we have decided to climb to raise money for brain cancer research.

Wow, incredible! And you are the experienced one now.

Well, mentally I am not ready for it. I mean, it’s not only a physical challenge; it is also very much a mental one. But I am sure my brother would be proud. In the last 50 metres, Matt pulled out the guide rope that my brother used to run with and he said you hold on to this. Imagine you are on this end and Rob is on the other. Paul stayed behind us and said, “Don’t look behind you; just keep going.” And he put on the original shirt that he wore when he ran with Rob during the Paralympics. So, it was extremely emotional. We had shirts printed out with Rob’s face and his achievements. Even though it was minus 15, we all took our jackets off to put it on when we reached the top. Normally, they don’t let you stay there for more than 10 minutes because it can affect your brain, but we stayed up there for 20 minutes because we did not want to leave. When you see the glaciers and everything up there, it’s just incredible.

Did it feel like a weight lifted off your shoulders?

Yes, I actually did not realize the pressure I was under until I reached the top. I think that if I hadn’t accomplished the climb, it would have compromised my healing process from losing Rob. So when I did achieve it, I was so relaxed and happy. That’s partly why I would like to do it again, because this time, I would like to do it for myself – step back and really look at the scenery.

How long did it take you to climb all the way up?

We did 10 days in total – eight days climbing up, two days coming down. It was actually a little longer, because we did the Northern Circuit – a quieter route circling the mountain. And then coming down was just two nights – it’s so steep that you can basically ski down using your poles.

Wow! I just can’t imagine climbing up all the way up there.

I am not a mountain climber; I am more of a hiker. But you don’t feel like you are climbing a mountain until you go up the summit. That climb was the toughest because it is seven hours climbing up and six hours coming down, so you are climbing for around 13 hours straight. Overall, it really did me a lot of good. When you look after someone who has brain cancer, it is a bit like Alzheimer’s – you see them disappearing. Rob was always a very humorous and intelligent person. When his legs got paralyzed, he lost his best assets as a professional runner. And with him also being blind, it was quite alarming and distressing for him. In the end, being fit was his worst enemy, because his body just would not give up. And to nurse him 24/7 those last four months was really hard – to me that was harder than climbing the Kilimanjaro. I am not particularly a religious person, but I believe that he was there on the mountain. I felt his presence a few times, especially on that last climb – he really helped me in that last push. I just hope he helps me this second time. Or maybe he is just like: “You were stupid enough to do it the first time, now you are on your own.”

What about Matt and Paul; how did they feel about all of it?

They did not hesitate when I told them I wanted to climb the Kilimanjaro in memory of Rob and that I did not want to do it alone, knowing it could affect me mentally and physically. And it was really good for them as well; they felt Rob’s presence too. It was emotional for all of us really – the last 50 metres everybody was crying. Then, as we came down from the summit, we decided to sing “We will rock you” because Rob was a massive Queen fan. His song was “We are the champions” – which also played at his funeral and he played after the Paralympics. But I was like, “I can’t sing that song, if I sing that song, I won’t be able to get through it.”

What about the next time; do you feel like a Kilimanjaro veteran now? Would you do anything differently?

Yes, now I’m thinking: “In eight months’ time I am going to be doing this all over again.” I haven’t told anybody by the way, so they are all going to think I am nuts. The only thing I would change is that I would hike a bit more: Sentry Hill is actually pretty good.

Photo: Team Rob at the top of the summit.