By design, 88% of Blessing Loom participants will lose their “investment” 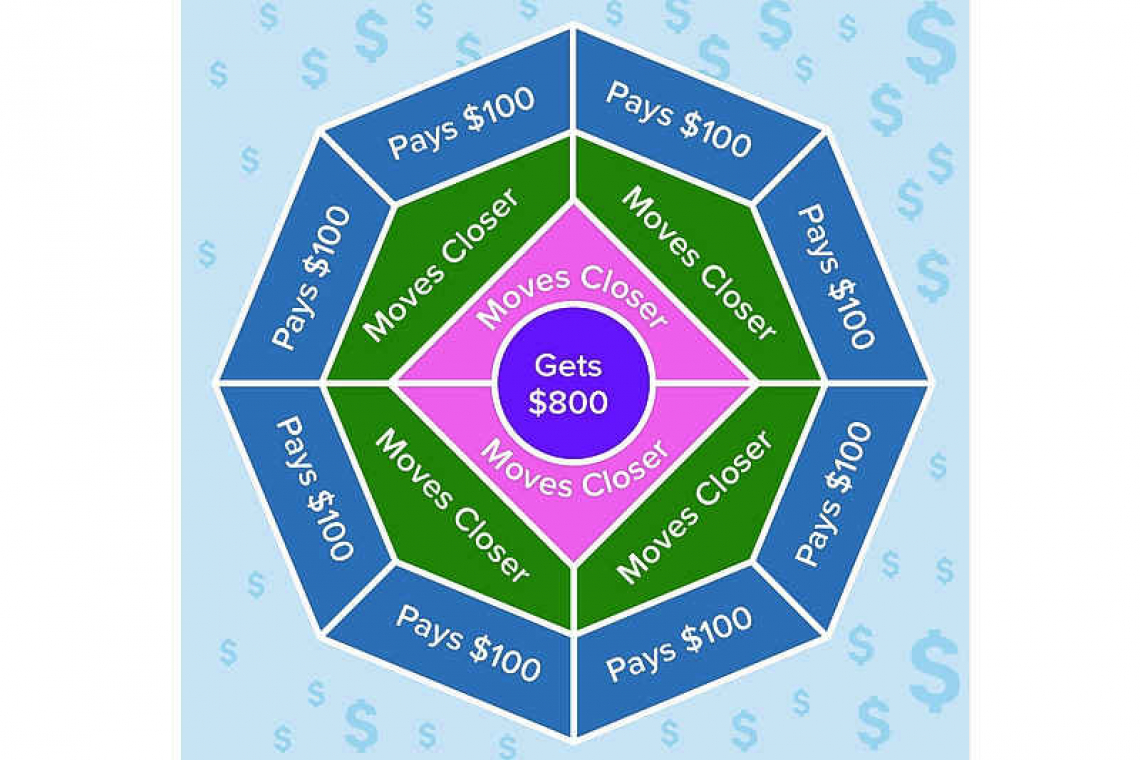 ~ Not a Susu, not community empowerment, just another pyramid scheme ~

Dark and uncertain economic times make the perfect setting for predatory financial scams – and pyramid schemes reign supreme. These fraudulent “investment opportunities” are designed to reward the minority of early participants, on the backs of the majority who are conned out of their hard-earned money.

The Blessing Loom is just one of the pyramid schemes spreading throughout the islands, and appears to be the largest on St. Maarten right now. The entrance fee seems to range from US $1,200 to $1,500, while the most widespread one seems to be $1,350. For many, this is a month’s salary or more.

It’s also being presented as a Family & Friends savings plan, and mislabelled as a Susu. Either way, it’s a “gifting circle” type of pyramid scheme. Of those who join, some 88% must fail for the earliest 12% to cash in. The winners get eight times the amount they invested.

In a slight variation to the classic pyramid, this one follows the model of the Airplane Game, which originated in the United States in the 1980s. The scheme resurfaces constantly in different parts of the world, under different names. This model has the illusion of being easier to win, because “all you have to do is pay in, and recruit two more people to do the same”.

Let’s break it down

The person at the centre of the circle (the circle being a pyramid, as seen from above) is set to receive payment from the last eight participants to join, who are placed on the outer edge of the circle. On the heels of the person at the centre, is the next level consisting of two people. The level after that comprises the four members that they recruited, followed by the eight on the outer edge.

Once the person at the centre is paid (eight times what they paid to join) the circle splits into two groups, so that the two members behind them each become the centre of their own circles. For them to get paid, eight new members need to join each of those two circles – taking their places on the outer edges.

So every time eight new people can be recruited to make each 15-person circle, the person in the centre is paid out. All pyramids collapse because the pool of recruits eventually dries up, runs out, or the authorities catch wind of the fraud.

Exponential growth is hard to intuitively recognise and anticipate. Multiply by two consistently, and at first numbers seem to grow more or less at an anticipated rate. Then the numbers shoot up at an increasingly “surprising” rate. This is why pyramids seem “safe enough” at first, then flare up (causing a sense of desperation) and crash.

Many “pushers” will claim that the pool of recruits won’t dry up, because the winners can keep investing, resulting in the “creation of wealth”. However, if the winner chooses to take the risk again, that means that the two circles, that form once they are paid out, will just require 15 new recruits, instead of 16.

Too much fuss keeping up with the math? Yeah, that’s the point! Pyramids bank on your inability to judge your odds of succeeding.

At whatever point recruits become too difficult to find and the money stops flowing in, most people are left waiting, and will never receive their money. The percentage of people to lose in this gifting circle-style pyramid scheme is 88% as of round three. As of round six, the loss rate is 87.5% – and it remains that way no matter how big the pyramid gets.

Despite their notorious reputation, pyramid schemes can be tricky for unsuspecting victims to spot. Word spreads quickly through social media; the opportunity might be presented by trusted friends or colleagues; and the alluring testimonies of early participants that cash in make you willing to look past what you know seems too good to be true.

If that’s not enough to trick you, investment buzzwords, nonsense motivational phrases and appealing to how you would like to see yourself (helpful, giving, entrepreneurial, money-savvy, even faithful) can seal the deal. Millionaire mind-set, right?

Financial regulators everywhere – including the Central Bank of Curaçao and St. Maarten (CBCS) which sent out a call to be alert in late April – warned that pyramid schemes and other scams were likely to spread in the wake of the economic instability caused by the COVID-19 pandemic.

“These scams are promoted using the COVID-19 situation as a cover to victimize unsuspecting or vulnerable persons, considering that in times of economic stagnation and downturn, people may be more inclined to try to make ‘easy money’. A Pyramid Scheme is a type of fraudulent investment scheme that profits almost solely by recruiting other participants into the programme,” CBCS warned.

This resurgence of this Blessing Loom started in the Unites States, quickly spreading through social media platforms and becoming viral in April, boosted by a struggling economy. The Federal Trade Commission alerted the public of its growing presence on May 21. The scam has been featured on local news stations in different areas, as well as the Better Business Bureau.

Two Washington Post articles published in August, warned that the same scheme was spreading quickly among the black community in particular, feeding on sentiments of needing to build the community. Misusing the name Susu plays into this, since the concept of a Susu is known amongst Caribbean migrants to the US.

However, in a traditional Susu, the number of people paying into the pot is fixed, and each person gets a regular pay-out. While members of this type of savings club do need to trust each other/the administrator, it is not a fraudulent recruitment scheme, and there is no magical thinking involved. Susus are not pyramid schemes.

Closer to home, the Blessing Loom recently made the news in Trinidad & Tobago after at least 1,200 furious people were scammed out of their money. This indicates that the much more populous country (1.4 million) could not manage to make it past round six.

Unfortunately, it was only a matter of time before predatory financial scams would run rampant, in a tourism reliant economy, still recovering from Hurricane Irma, and dealt an even greater blow during the COVID-19 crisis. Pyramids are alluring, play on blind spots, and most people are looking for a light at the end of the tunnel. This is not it.

Have you fallen for a pyramid scheme or another deceiving scam? We want to hear from you. Email This email address is being protected from spambots. You need JavaScript enabled to view it. with the name of the scheme, a few words on your experience, and your contact information.

Image caption: Pyramid scheme warning image by the US Federal Trade Commission (FTC). As the Blessing Loom went viral in the US, the typical entrance fee was US $100. In St. Maarten, the same scam requires an exorbitant $1,350 on average. When the player in the purple circle gets paid, the two in the pink section move up a level and each become the centre of their own circle. They get paid when eight new paying recruits are duped into joining the scheme. The scheme is designed to fail and leave most participants with no payout.