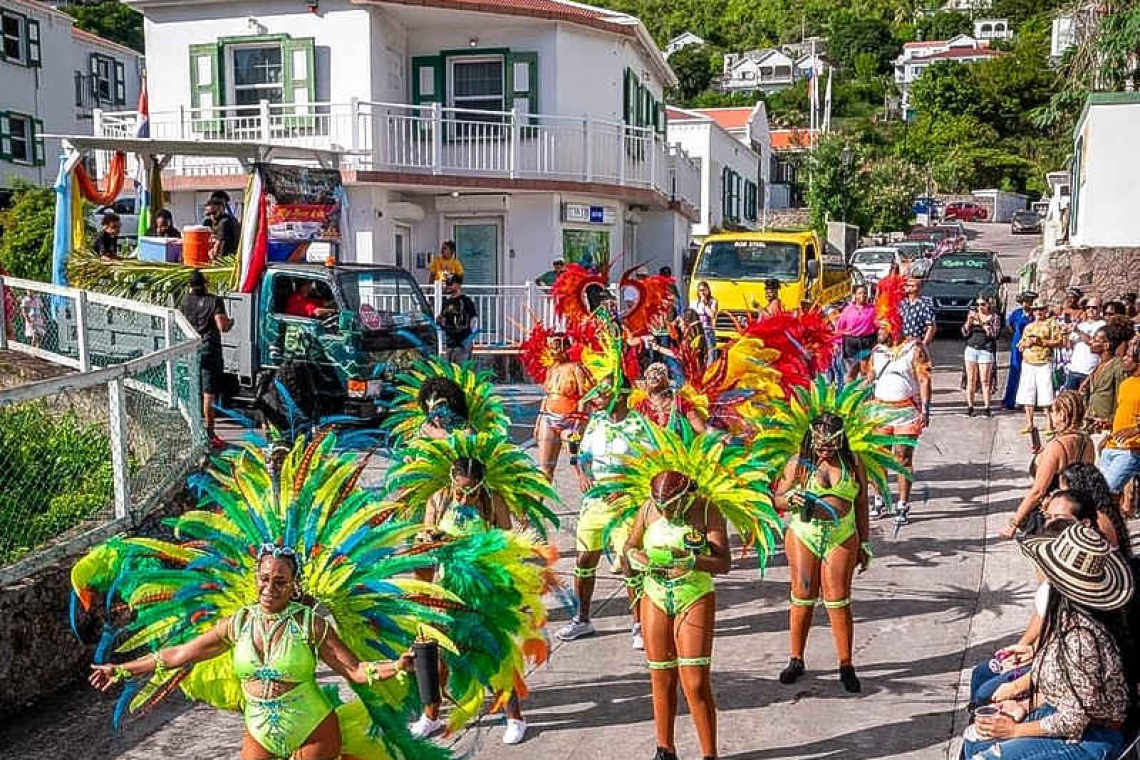 Photo: Troupe “Gods of the Elements” jamming down Samuel A. Charles Street.

As a proverbial son-of-the-soil, Saba’s Carnival is not new to me. I grew up with the sounds of the bands coming through my bedroom window, and later on got acquainted with the smells of my mother’s kitchen, as she cooked up a delicious storm to sell to the ravenous revellers in her roadside stall on Parade Day.

But, like many of my countrymen and women, I said goodbye to Saba – and by extension Carnival – when I left the island for education and then stayed away for employment.

I didn’t know what to expect when the Makana ferry sailed through the choppy Caribbean waters last Thursday, taking me home to Carnival for the first time in five years. A week later, I’m happy to confess that I was not disappointed.

Why I was so pessimistic on that bumpy ferry ride was the sad news I had heard earlier: The founder of Saba Carnival had passed away that very morning, in the midst of the festival that she started some 47 years ago.

The death of Miss Carmen Simmons – affectionately known as “Granny Carmen” to many of us from The Bottom – was tragic. But instead of leaving a lingering downcast vibe on the festival, the Saban community rallied around her legacy and turned tragedy into serendipity.

My Carnival experience properly started with J’ouvert morning at 4 o’clock Saturday, in a heavy downpour of rain, exactly the way the gods of Carnival seemingly intend all Saban J’ouverts to begin.

In my experience, you can’t successfully jam up Saba’s steep hills without a good soaking, especially considering that you will need to cool down from the copious amounts of Jungle Juice warming your belly. For those of you who have never heard of this deceptively strong, sweet drink; take it from me, it’s not for the faint of liver.

Sabans have their own secretly guarded Jungle Juice recipes, but the way I was taught calls for varying amounts of Amaretto, Bacardi Gold, 151-proof Rum, Grenadine Syrup, and Orange-, Pineapple-, and Guava-juice. As you jam past the green foliage of a literal jungle, the Juice will have you swinging from the trees. Until the sun rises and you come face-to-face with the breath-taking views of the sheer cliffs, right below the road on which your bouncing trailer is on.

I didn’t mind the hangover when I woke up the following afternoon, mainly because the pounding in my head was drowned out by the pounding of the bands’ speakers preparing for parade day. The music echoing off the mountain, interspersed with the “mic check one-two” of the band’s vocalists, is all it took for my excitement and anticipation to start mounting.

The parade was large, colourful, energetic, and vibrant – and not because of the numerous, blooming flamboyant trees (or “July trees” as we call them in Saba) that line the parade route.

At the head of the parade, on the first day, was the aptly named “Jungle Juice Crew”. Its more than 80 revellers were flamboyantly clad in an abundance of feathers and beads, which demonstrated the talent and skill of teenage troupe leader Tyler Johnson, who designed and handmade each costume from scratch – a process that reportedly started back in January.

Next in line was the troupe “Gods of the Elements”, which was headed by Hazel Durand, the granddaughter of Carnival founder Carmen Simmons. Come to think of it, about half of the troupe was her descendants. They brought tremendous energy to the road, especially in the spectacularly choreographed routines they pulled off at various points along the route, including in front of Granny Carmen’s porch – a spot where she used to watch the parade in her later years.

Troupes “Saba Proggers”, led by Rosa Johnson, and “Mystic Revelers”, led by Jamila Levenstone and Jonas Charles, made sure that they were not outmatched by the troupes that came before them, especially the latter, who let their waistlines loose with reckless abandon.

A troupe of the Soualiwomen Kultural Association from St. Martin also made an appearance, dressed in green costumes with cloud-shaped headdresses to symbolize the rain that nurtures our tropical homes.

On Sunday, on the “Last Lap”, the troupes did not want the revelry to stop. As the first set of trailers shut off their sound systems at the end of the route, the revellers who were jamming behind them just kept moving on to the trailers still playing music. This continued until all the troupes were mashed up together behind Saba’s own “Entyce Band”, who took the jubilant dancers into the Carnival Village to sounds of Asa Banton’s “Shake Your Pampalam” and a Soca cover of Pheelz & BNXN fka Buju’s “Finesse”.

Harkening back to Saba’s Carnival traditions, the troupes were invited on stage after the Last Lap to perform in front of the captivated audience. Here Gods of the Elements and the Jungle Juice Crew shined, with the former perfectly executing a complex dance choreographed by Edsel Lake.

I particularly enjoyed the stage portion of Last Lap, as it was something that had been synonymous with the grand parade but had altogether disappeared from Carnival in recent times. Its resurrection this year put an exclamation mark on a celebration that was both nostalgic and modern, and exuberant and full of life.

And I’m not alone in my assessment. As I greeted many old friends, family members, and acquaintances during my (extended) weekend trip to my island home, I invariably asked how they felt about this year’s festivities. The overwhelming answer? It was a Carnival (particularly the ending of it) that they haven’t seen for many years – one which brought back memories of the days of Carnival stalwarts Juliet Johnson, Glenn Holm and, of course, the legendary Carmen Simmons.