Cogs help the train go up 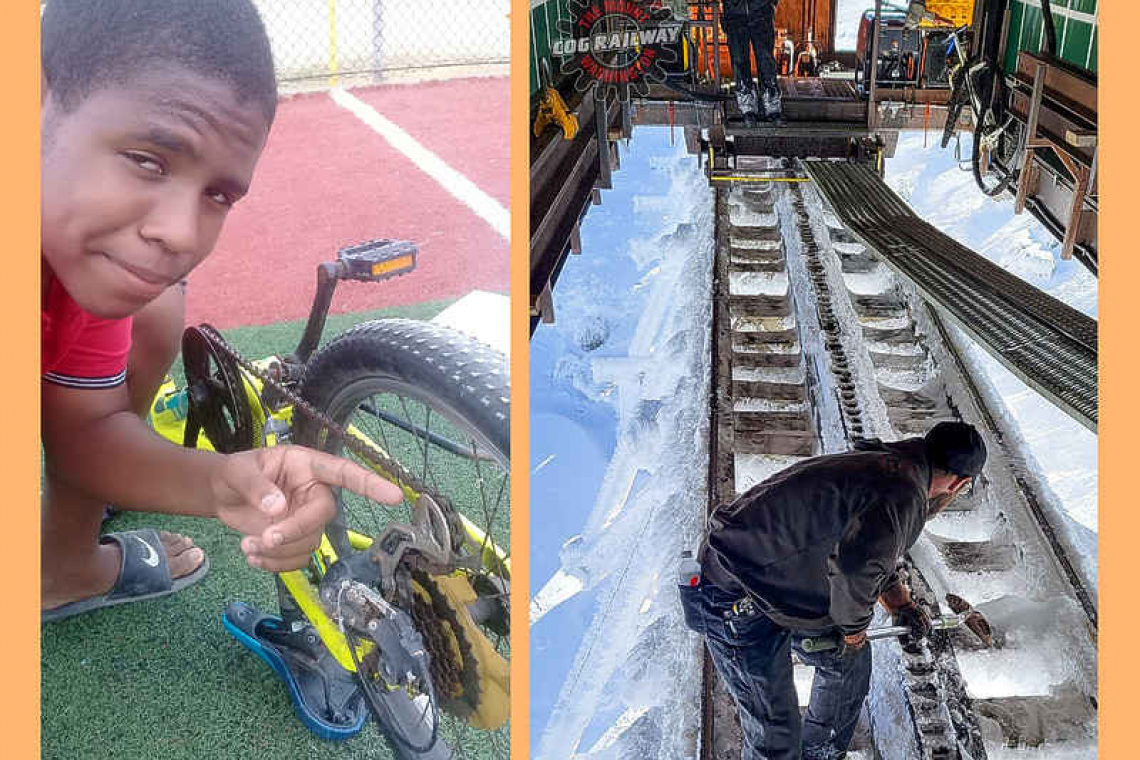 Just about anyone, who has ridden a bike a lot, has had a chain fall off. If you have not had your chain come off, you at least know someone who did.

Fixing it is not hard. Just flip the bike over and rest it on the seat and handlebars. Then put the chain on the gear wheel of the rear tire. Hook the chain on one tooth of the main gear and turn the peddle – and just like that, the chain is back on.

Now imagine it is 1866. A man named Sylvester Marsh came up with the idea of using a chain and gear wheel to pull a train up a mountain. It’s like the bike’s chain and gear, but it’s also different because a bike’s rubber tires can grip the surface of the road.

Mr. Marsh had a big problem to solve, trains have smooth metal wheels. And the rails they ride on are smooth and shiny. They are not made for traction, so trains and hills do not go together. Normal train engines often have a sand box. No, not a toy for children, but to spread sand on the tracks when they are slippery like on a rainy day. So climbing a steep mountain by train seemed impossible because the sand box and sand would not be enough for the steep incline.

Mr. Marsh had an idea and decided to lay a chain down on the railroad bed between the tracks. It was spiked down into the ground, like the way rails were. Then instead of the wheels of the engine used for power, he placed a gear wheel in the centre of the locomotive. He named the gear with teeth a cog.

Before 1866 was over, he had made a life size working demonstration model. It was a success. In three years, he had created a cog railway up to the top of Mount Washington in New Hampshire. The year was 1869.

This was no small job. Mount Washington is 6,288 feet above sea level; the grade or angle of the slope is 37 percent. The Cog Railway travels up the mountain at a speed of 2.8 miles per hour and down at 4.6 miles per hour. Part of the mountain was so steep the engineers built a trestle bridge to help the Cog train go up. The trip up is not a straight line, but full of lots of curves. The total trip to the top is three miles. It takes 65 minutes to go up and about 45 minutes to come down.

But the track with a chain in the middle was not the only thing that had to be made special. There was another problem to solve. The locomotive not only needed a centre cog wheel; but back in the 1800s, engines were steam powered. They needed a boiler to hold the steam. Going up a steep hill, the boiler would not be level.

So, what is so special at the top? Well, the view from the top of the mountain must be spectacular. In fact, the native American Indians believed that the mountain with its beautiful view was the home of God (they called him The Great Spirit).

In his book The Mount Washington Cog Railway, author Bruce D. Heald describes the view, “The top of the mountain will be memorable, for we shall experience the 360-degree views. We'll see hundreds of mountain peaks across three states and two countries and the possible shimmer of the faraway Atlantic Ocean.”

Debbie and Barry Warren, who introduced Player Development SXM to the Cog Railway, says the train runs during the late spring, summer and fall. Mt. Washington is known for its extreme weather. This year, the opening of the Cog Railway was delayed because the tracks were covered in snow through spring, and on June 19, two days before summer began, it snowed! Volunteers had to go clear the chain and tracks of snow and ice before the steam engine could push the passenger car up the mountain. To this day, the trip up and down the Cog Railway to the top of Mt. Washington is one of the most loved things to see and do in New Hampshire.