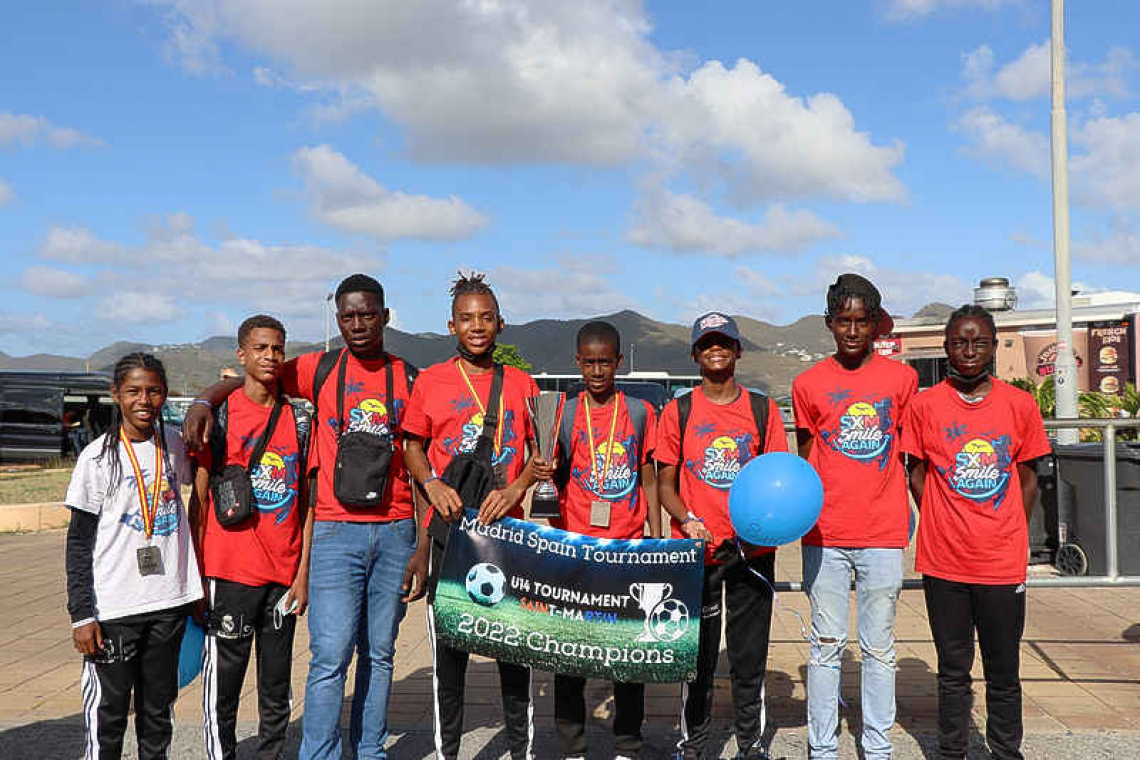 MARIGOT—The St. Martin U14 football team have made triumphant return to the island after winning the first edition of the World Challenge Real Madrid Foundation tournament in their age category. The tournament took place from April 7 to 15.

The team returned with the champion’s trophy after winning all their matches, culminating in a nail-biting penalty shoot-out which they won 4-3 in the final against USA.
The 18 players of the two U14A and U14B teams, accompanied by their coaches Jean-Marc Hon and Jeandray Franck, as well as parents and members of the St Louis Stars association, were welcomed on April 15 by a delegation from the St. Martin Tourism Office led by President Valérie Damaseau.
Also present were elected officials of the Collectivité including President Louis Mussington, representatives of the Saint-Martin Football League and Alex Baly, President of the Youth Inclusive Education Local Development (YIELD) association, which initiated this project.
St. Martin Tourism Office sponsored 10 tickets for the players. Following the team’s arrival at Princess Juliana International Airport a second welcome was given to the players and coaches during a cocktail party organised by the Collectivité at the Jean-Louis Vanterpool stadium where each player was given a bouquet of flowers.
This file had been presented to the Tourism Office by the YIELD association, which works for the success of promising athletes, and by the parents' committee.
"This is an important mobilisation for the development of sports tourism and the international influence of our territory," remarked President Valérie Damaseau, who thanked the members of YIELD for this initiative.
In 2021 two selection camps were organised, one on the Dutch side and one on the French side, by the Real Madrid Foundation from which 12 players from each side of the island were selected to participate in the international tournament in Madrid in 2022.
“My foundation was contacted by the parents of the young players who were selected to go to Madrid because the travelling expenses were really high,” Baly explained. “I got together with my board and we decided to partner with the parent’s committee. We then met with Grégoire Dumel from the tourism office to request a partnership with them.
“Based on the file we presented the tourism office consented to finance 10 plane tickets. My pitch was that this was a great opportunity for St. Martin to be showcased at international level. I must commend the tourism office for seeing the importance of the opportunity.”