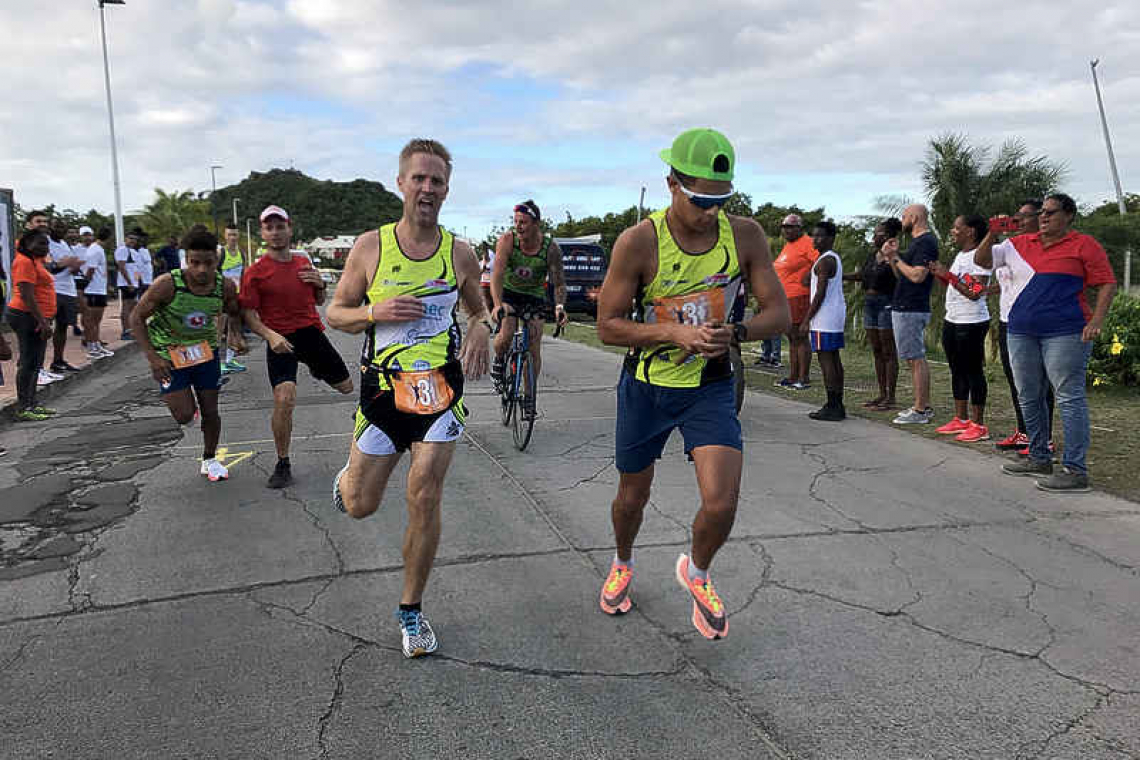 Organisers SXM Roadrunners had to make the difficult decision the day before to change the course just hours before this newspaper’s deadline for its special supplement and consequently the leg through French Quarter was taken out. By then French Quarter had been cleared of blockades by the Gendarmerie but with the risk of protests resuming, organisers wisely stuck to their decision.
It was the first time in the history of the event that the race course had to be modified but to date the race has never been cancelled.
Runners instead turned around at the transition before French Quarter in the dip in Orient Bay and ran back on the same course as the outward legs, towards La Savane and Marigot. The race was run in the clockwise direction this year.
Because of the route change some runners ended up having to run a longer leg. The route change made the course about 5K longer and also increased traffic in both directions.
The order of finish for adult teams were: first Intergeneration Runners (2:37:56), second Avenir Sportif Club (2:39:15), third SXM Tri Academie (2: 41: 15), fourth SXtreme Black Stripe (2: 45:25), and fifth SXM Fire Dept. Pompiers (2: 51:16).
The Dynamics Sporting Club A team won the pre-junior category (under 13) while MPC College students won the Teen Teams caetgory
Avenir Sportif Club, boosted by three runners from Aruba and Curacao, started out strong winning the first two legs before dropping to third. They recovered to take the lead again from leg four. From there on it was a tussle for dominance between the first three teams.
A brilliant run by Intergeneration runner Hélène to overtake Avenir runner Manuel at Rancho on the Orient Bay leg put Intergeneration back into the lead which they kept all the way to the finish with Alain Boucaud bringing the baton home through the finish banner.
The Best Dressed Team went to Ami and Remarkable Feat award to SXtreme Runners co-founder Andy Amongon for his work teaching sports for children with learning difficulties and autism.
Other nominees were Liz Maidwell (81), Carol from the Louis-Constant Fleming Hospital, and coach Cayley Mackay from Pain Cave Gym. Cayley is the coach for Greg Thompson who last year completed his stadium lap in a wheel chair and this year walked it, earning great applause.
“It was very challenging organising it this year but we had to roll with the punches,” said Roadrunners board member Susy Piscione.
In total 52 teams participated in the race which still retained its usual spirit and enthusiasm. The hand-made trophies made from recycled materials were made by Marci Cooke. 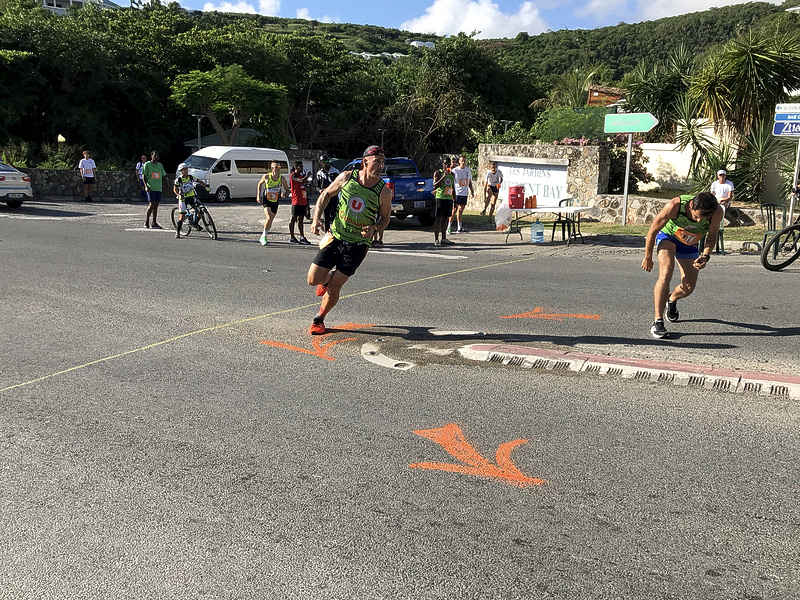 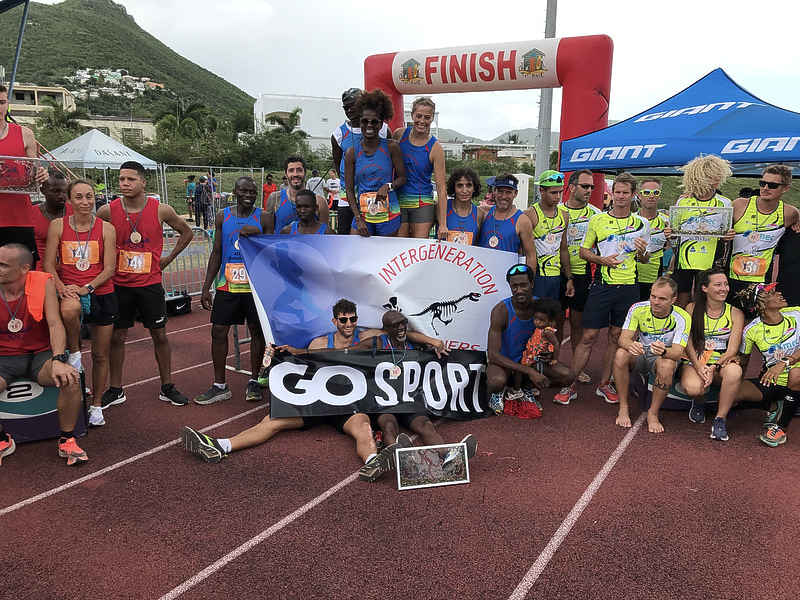 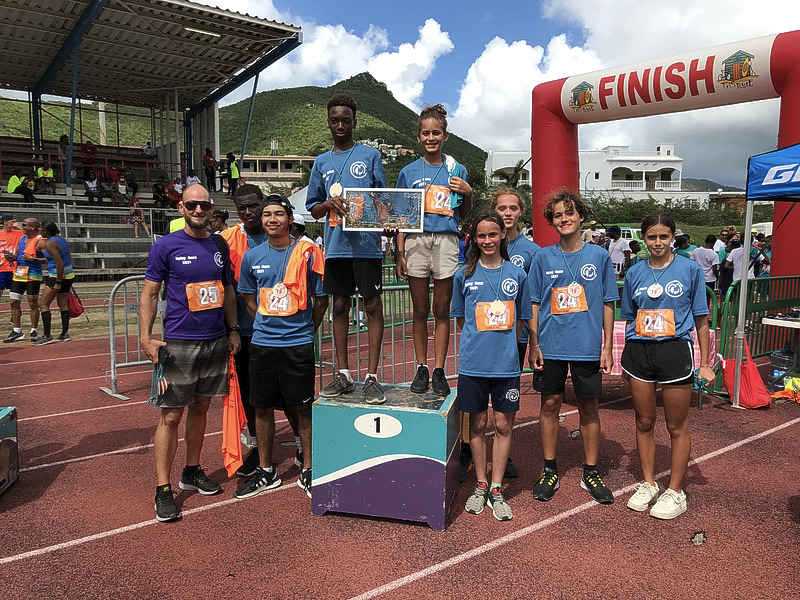 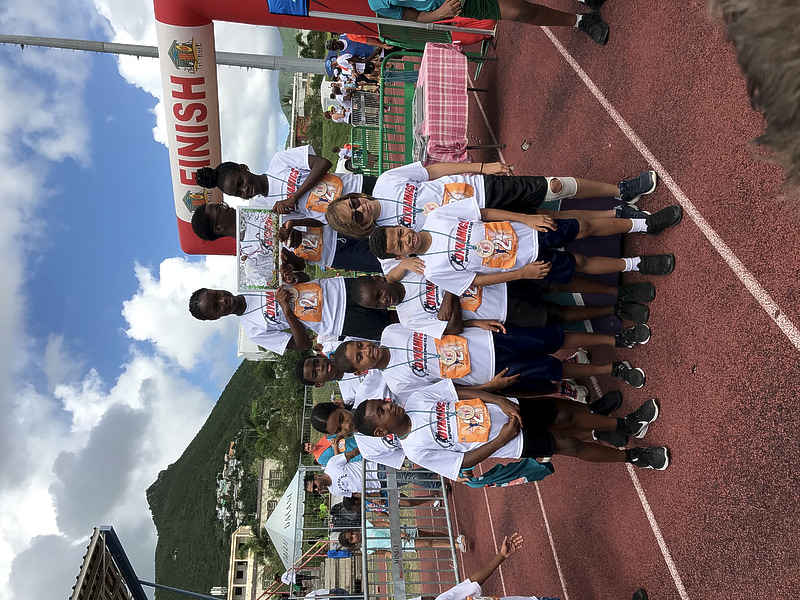