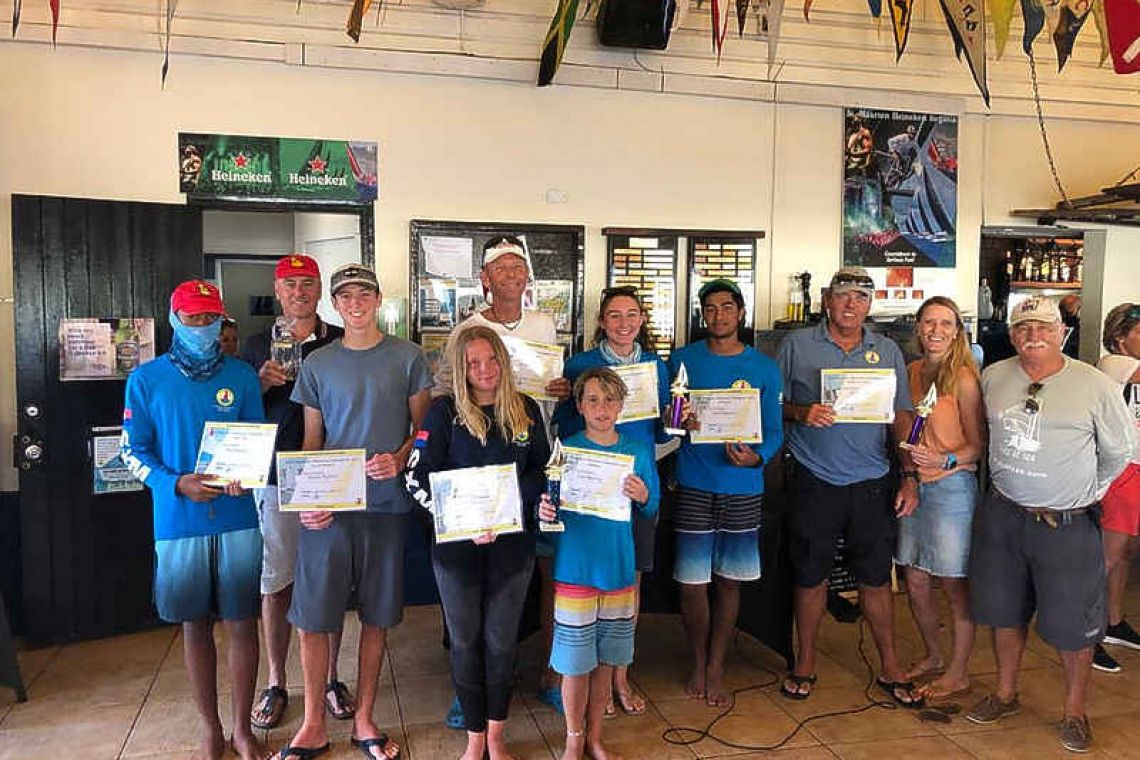 The 37 boat fleet competed in several different groups under the auspices of the St. Maarten Sailing Federation. Sailors from both sides of the island battled stiff breezes in two racing areas.
Meesemaecker scored 5 wins in 7 races. Close behind was Frits Bus who recorded one win but was always in the top three. Jolyon Ferron came third after some unplanned swimming.
Besides being the National Championship for St. Maarten, it also constitutes a component of the scoring of the Grant Thornton Season Championship series.
"We are very happy that we were able to organize this event, with the high number of participants. Having two racing fields contributed to this. it was a very good day and we are especially very proud of all the kids sailing, who have shown tremendous progress", according to Saskia Revelman, sailing instructor at the St. Maarten Yacht Club.
Justin Pieterse took top honours in radial rigs and was also fourth in the overall Laser standings.
In the smaller 4/7 the winner was Emma Lennox who scored fifth overall. The national champions in class were Frits Bus, Justin Pieterse and Emma Lennox.
Meesemacker, not being a resident of St. Maarten was not eligible for the National championship status.
The Optimist class featured 11 entries. Caii Banting won the class despite one bad race. In race five visitor from the French side Emilien le Normand took a win.
Adriaan Coppelmans came second and Veronica Destin third.
The Laser Pico class was won by Boo Faustin with Melina de Vries taking second.
The RS Quest class was dominated by Summer Jean Morton and Sahil Khatnani who were winning everything until the last two races when Mathijs Detering and Delhan and Arthur Banting and Caoimhe Brennan suddenly improved.
The Jeanneau Sunfast 20 class was won by yacht club commodore Garth Steyn.
"Sailing is alive in St. Maarten. What a great day," said Steyn. Nils Jannichsen managed to break a tie with Robbie Ferron due to having two wins with Andrea Scarabelli just inches behind the podium.
The prizes were awarded by globally recognized sailor Peter Harken whose expertise in sailboat racing stretches from ice boats to America’s cup and who was, with his late brother Olaf, responsible for the development of much of the high technology sailing hardware currently used on racing sailboats.
The St. Maarten Yacht Club cancelled the first racing day of the Hope Ross series that was scheduled for the Easter weekend.
The two-day Grant Thornton Multiclass Regatta will be held April 10 and 11.