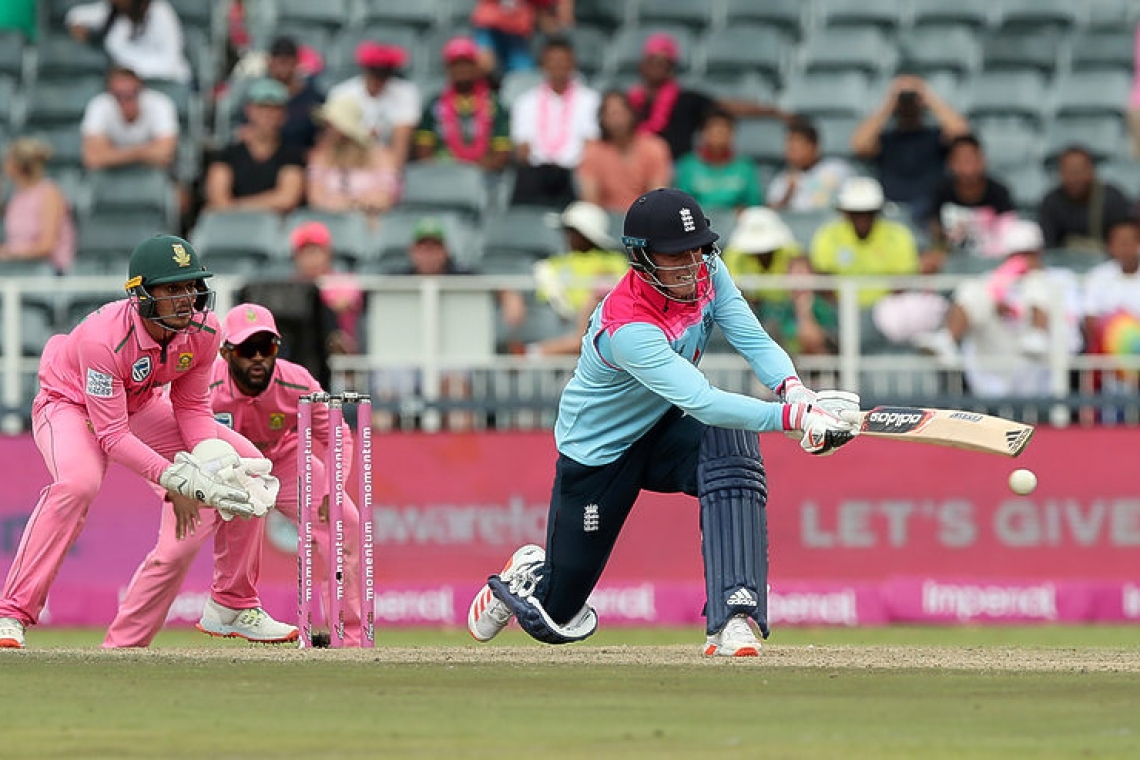 World champions England won the toss and elected to field, restricting their hosts to 256 for seven in 50 overs, a below- par score on a day when the players wore pink to raise money for breast cancer awareness.
The touring side looked composed in their chase, apart from some late jitters, as Joe Denly top-scored with 66, reaching their target with 40 balls to spare to claim a share of the series after the second game was washed out by rain.
The teams meet in a three-match Twenty20 International series which starts on Wednesday in East London, and concludes next Sunday in Pretoria.
"I thought we bowled well today," England captain Eoin Morgan said. "Adil and Mo (Ali coming in and showing their value, Adil with the control and variation, he was outstanding.
"I thought the chase was well within our grasp and it was disappointing to limp over the line. We should have done it four or five down with the partnerships we had."
South Africa struggled to build momentum in their innings, with captain De Kock (69 from 81 balls) and David Miller (69 not out from 53 balls) leading their charge.
Rashid proved a handful for the top order as he trapped Bavuma (29) lbw and bowled De Kock, removing South Africa's two batting stars from their victory in the opening ODI in Cape Town.
Miller's imperious hitting towards the end of the innings, in which he bludgeoned four massive sixes, took the home side past 250 when it had looked as though they would fall short of that mark.
Jason Roy (21) and Jonny Bairstow (43) rocketed England to 61 in 6.2 overs in reply before both fell in quick succession.
When Morgan (9) was caught and bowled by seamer Beuran Hendricks (3-59) South Africa felt in the game, but Joe Root (49) and Denly provided the stability through the middle order to take their side to within sight of victory.
The home team were given hope when England lost four wickets for the addition of 20 runs as Lungi Ngidi (3-63) recovered from a poor start to rattle the visitors.
But Ali (17 from 16 balls) provided the steadying hand for England to seal the win.
"We thought it was getting tight and we had a bit of a sniff," De Kock said. "It was cool to make it tough for the English guys.
"Our energy has stood out, we've got a young team but they had a lot of energy on the field and I enjoyed that."