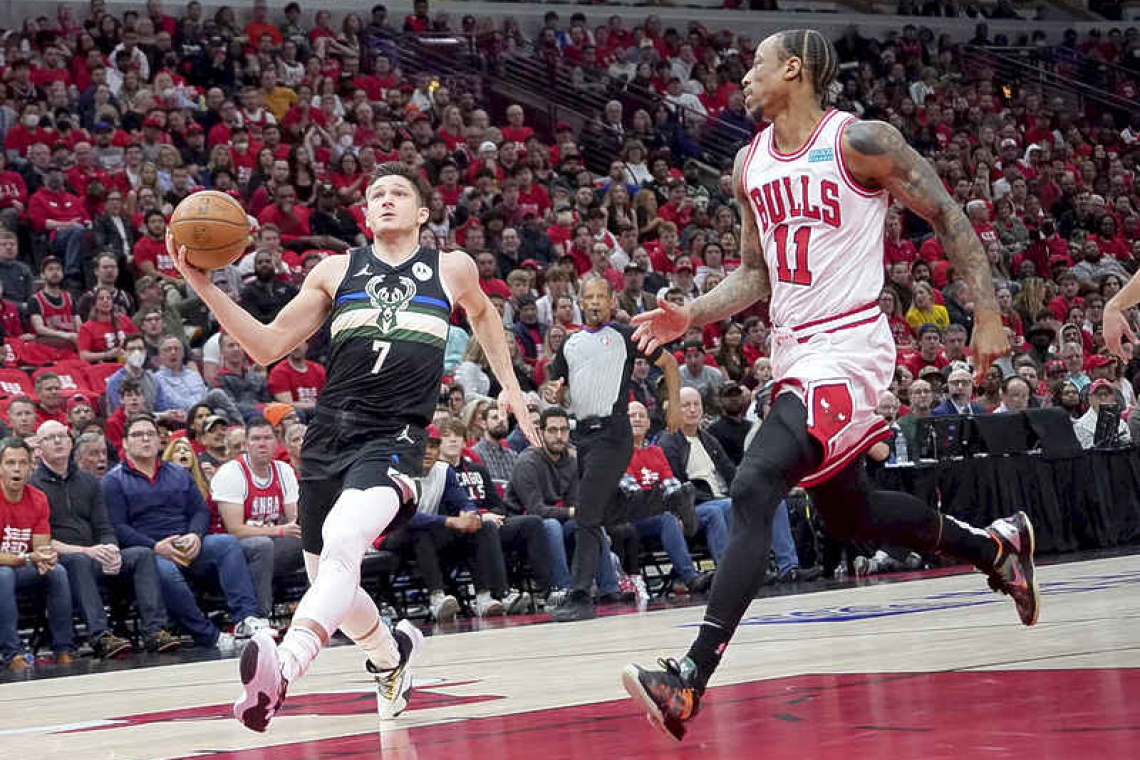 CHICAGO --Grayson Allen continued to torture the host Chicago Bulls with 27 points off the bench in 28 minutes, Giannis Antetokounmpo scored 32 more and the Milwaukee Bucks completed a two-game road sweep with a dominant 119-95 victory in Game 4 of their Eastern Conference playoff series on Sunday afternoon.

The third-seeded Bucks, who have won 15 of their last 17 first-round playoff games, will go for the clincher in the best-of-seven series on Wednesday night in Milwaukee
Getting increased playing time in the absence of injured Khris Middleton, Allen shot 10-for-12 overall and 6-for-7 on 3-pointers en route to his second straight postseason career-high.
After totaling just three points in the first two games of the series, Allen had exploded for 22 points in Friday's 111-81 win at Chicago.
Antetokounmpo chipped in with 11-for-22 shooting, helping the Bucks scorch the nets to the tune of 52.3 percent. The Most Valuable Player candidate completed his third double-double of the series and 44th of his postseason career with a game-high 17 rebounds.
Attempting to rebound from a defeat as they had in Game 2 in Milwaukee to draw even, the Bulls hung within 25-24 into the second minute of the second quarter before falling gradually behind.
The Bucks' biggest push occurred over the final 2:39 of the period, when Allen contributed two- and 3-point hoops to an 8-2 run that turned a nine-point game into a 56-41 halftime advantage.
Chicago suffered a key blow during that stretch when Alex Caruso took a Jevon Carter forearm in the face and had to leave the game. He had a bloody nose as he went to the locker room, was examined for a concussion and did not return.
The sixth-seeded Bulls got no closer than eight in the second half.
Antetokounmpo also found time for a seven assists and two blocks, while Jrue Holiday had 26 points and seven assists and Bobby Portis 14 points to complement 10 rebounds.
Holiday added 5-for-8 accuracy on 3-pointers to Allen's 6-for-7, helping Milwaukee go 17-for-33 and outscore the hosts 51-27 from deep.
DeMar DeRozan finished with 23 points for Chicago, while Zach LaVine (24 points, 13 assists), Patrick Williams (20 points, 10 rebounds) and Nikola Vucevic (11 points, 10 rebounds) all recorded double-doubles.
The Bulls have never rallied to win a playoff series after falling behind 3-1.