Vandalism of Columbus statue reignites debate on colonial past 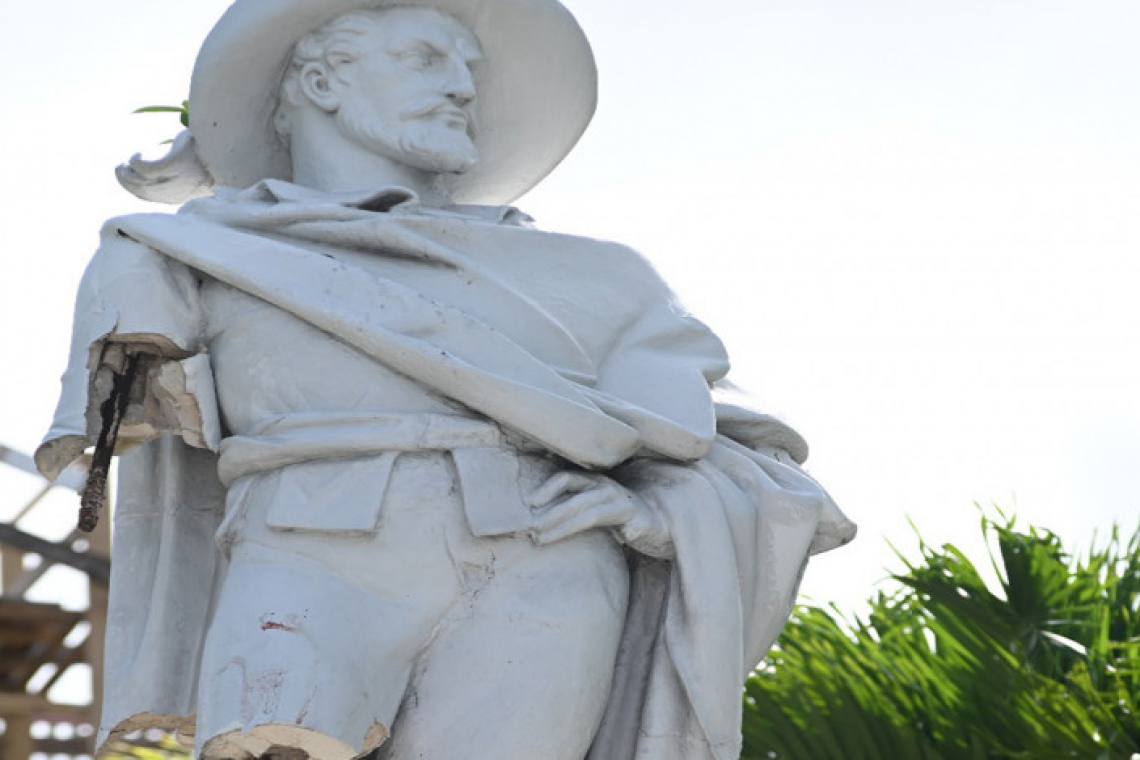 The Christopher Columbus statue on the steps of Government House was vandalised on Saturday afternoon. Photo credit: Torrell Glinton.

NASSAU, The Bahamas--Two days ahead of National Heroes Day, a man took a sledgehammer to the Christopher Columbus statue on the steps of Government House in a move some viewed as heroic and others lamented as the destruction of a historical monument.

In a video that went viral on Saturday, the man was seen repeatedly hitting the statue with a sledgehammer as he shouted, “Let’s go, Bahamas. Let’s go.”

He caused extensive damage to the statue, removing one of the arms and one of the legs.

Police said the man, who had a bulletproof vest, was taken into custody.

Prime Minister Philip Brave Davis said on Monday that while he empathises with the resentment many feel toward Columbus’ legacy, the destruction of public property was unacceptable.

He said Cabinet would discuss whether the statue would be repaired or replaced.

“I’m always concerned when I see acts of disobedience that result in the destruction of public property,” he said. “We ought not to condone that and we don’t condone that.

“Whatever the historical significance and the protests that have come from it in respect to Columbus’ encounter with The Bahamas, that’s one issue. In fact, I sympathise and empathise with some of the voices that are speaking to the fact of … realigning history, so that its true facts are revealed and interpreted.

“And so, I do share and understand some of the sentiments. But this is not the way to express those sentiments, by destruction of public property. So, we do not condone it and we expect that the person who is responsible will be dealt with according to law.

“Now, insofar as whether we replace it, that’s another issue. We will have a discussion on that at the Cabinet level and we will decide what we do going forward. But there is a loud cry out there for us to ensure that our history is properly represented, particularly as it relates to the African diaspora.”

On Saturday, following the man’s arrest, Royal Bahamas Defence Force (RBDF) Commodore Dr. Raymond King said an investigation was underway to determine how the act was allowed to proceed given that Government House, which is currently undergoing renovations, is heavily guarded by the Defence Force.

“It is with regret that I stand here at Mount Fitzwilliam with members of my executive team examining the extent of the damage here at the Christopher Columbus statue,” King said.

“And I’ve only just recently received the report for the death of Percival Perpall and the deficiencies that would have been alluded to by the committee with the view of correcting those deficiencies and the overall state of security and safety here at Government House.

“The watch has been relieved of its duties and an internal inquiry has started with a view to determining the extent and scope of perceptively unchallenged vandalism that was permitted to occur; and I wish not to pre-empt or to bias the inquiry but to say the site is under active construction. It is a construction site.

“But the matter will be dealt with completely, thoroughly and transparently. And those being held culpable for allowing this damage to occur will be held accountable for what transpired here ...”

The incident came on the weekend of the National Heroes Day holiday, which was formerly called “Discovery Day” in honour of Columbus’ landing in The Bahamas on his first voyage in 1492.

Columbus, who was long credited with the “discovery” of the New World, is now widely condemned for his violence toward enslaved persons and forced conversion to Christianity of the native inhabitants of the Americas.

The statue in his honour, which has featured prominently on the stairs of Government House for nearly two centuries, was modelled in London, England, and erected in 1832, under the direction of Governor James Carmichael Smyth.

As images of the destroyed statue made the rounds on social media, some expressed their support of the man, labelling his act a heroic one, while others lamented the vandalism of the statue. Some argued that the statue ought to be removed in a proper manner and displayed in a museum instead.

University of The Bahamas Associate Professor of History Dr. Christopher Curry renewed calls for the Columbus statue to be removed, along with other colonial relics.

“There is a need for a serious consideration of how we think about our history being told and the relics that represent our colonial past, whether it be the Columbus statue in front of Government House, Queen Victoria in Parliament Square [or – Ed.] Woodes Rogers in front of the British Colonial Hilton,” he said. “These are all mnemonic reminders of a colonial past that we need to move away from.”

However, prominent Bahamian historian Dr. Gail Saunders said the question of what should happen with the statue is a complex one, even given Columbus’ problematic legacy.

Saunders did not say whether she believes the statue ought to be removed, but she noted that it would only be fair for similar monuments to be in place to commemorate the Lucayans who inhabited The Bahamas long before Columbus’ arrival in the Americas.

“The Lucayans were already in The Bahamas, so, really, he didn’t discover The Bahamas,” she said.

“But it’s a very tricky question on how, I guess, history needs revision.” ~ The Nassau Guardian ~