...STRONG WINDS AND HEAVY SQUALLS LASHING THE SOUTHEASTERN BAHAMAS AND THE TURKS AND CAICOS ISLANDS... 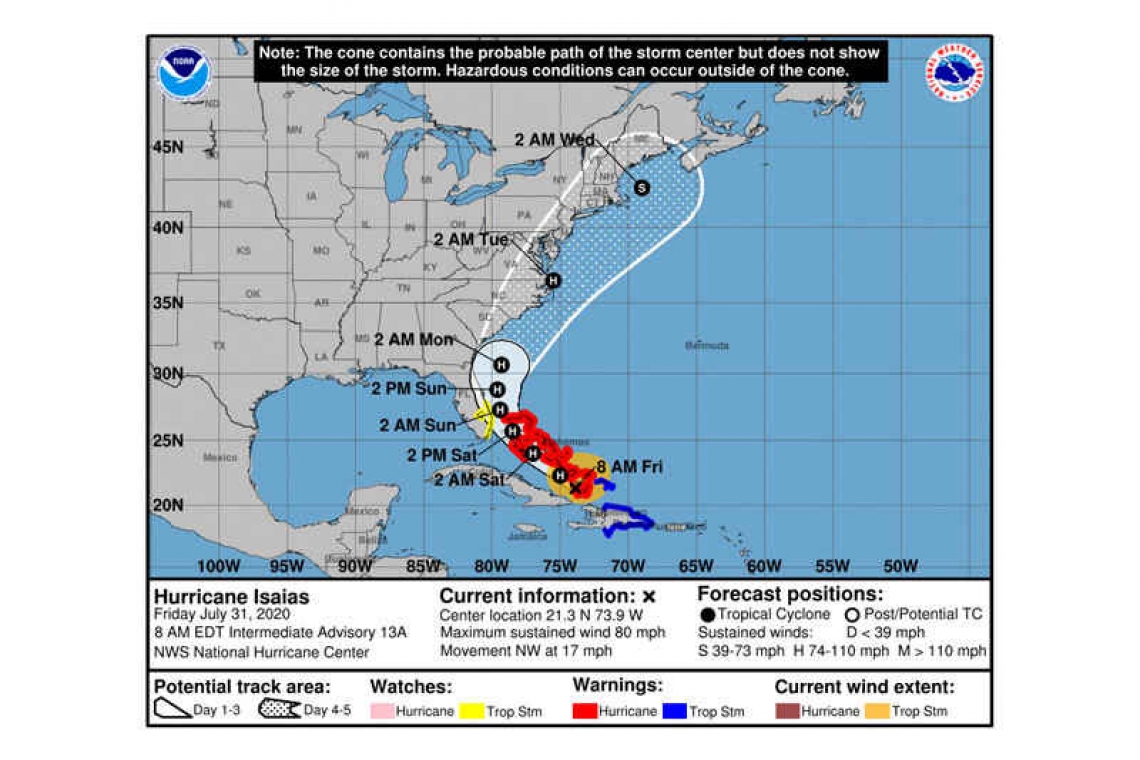 ...HURRICANE CONDITIONS EXPECTED TODAY OVER PORTIONS OF THE BAHAMAS... 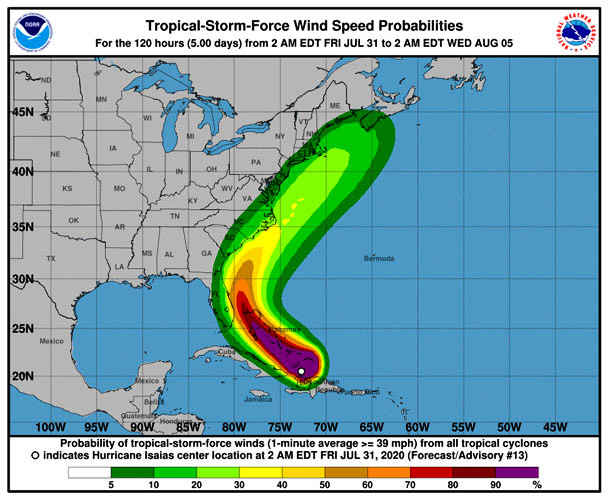 The Tropical Storm Warning for Haiti has been discontinued.

* Southeastern Bahamas including the Acklins, Crooked Island, Long Cay, the Inaguas, Mayaguana, and the Ragged Islands

A Tropical Storm Watch is in effect for...

* East coast of Florida from Ocean Reef to Sebastian Inlet 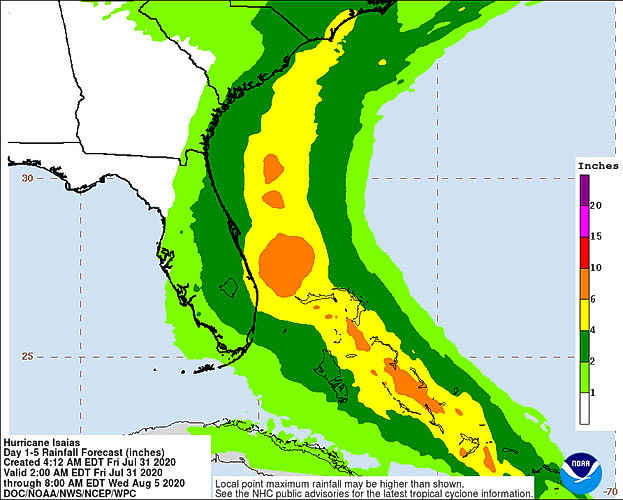 Interests elsewhere along the southeast coast of the United States should monitor the progress of this system. Additional watches or warnings may be required for a portion of the Florida peninsula later today. The Tropical Storm Warning for the Dominican Republic will likely be discontinued later this morning.

At 800 AM EDT (1200 UTC), the center of Hurricane Isaias was located by NOAA and Air Force Reserve Hurricane Hunter aircraft near latitude 21.3 North, longitude 73.9 West. Isaias is moving toward the northwest near 17 mph (28 km/h), and a generally northwestward motion with some decrease in forward speed is expected for the next couple of days followed by a turn toward the north-northwest. On the forecast track, the center of Isaias will move near or over the Southeastern Bahamas today. Isaias is forecast to be near the Central Bahamas tonight, and move near or over the Northwestern Bahamas and be near or east of the Florida peninsula on Saturday and Sunday.

Maximum sustained winds are near 80 mph (130 km/h) with higher gusts. Some strengthening is possible today, and Isaias is expected to remain a hurricane for the next few days.

Reports from the reconnaissance aircraft indicate that the minimum central pressure is 990 mb (29.24 inches).

STORM SURGE:  A dangerous storm surge will raise water levels by as much as 3 to 5 feet above normal tide levels in areas of onshore winds in the Bahamas.

WIND:  Tropical storm conditions will continue across portions of the Dominican Republic and the Turks and Caicos this morning. Hurricane conditions are expected to begin in the southeastern Bahamas this morning and spread into the central and northwestern Bahamas tonight and into Saturday.

Tropical storm conditions are possible in the watch area in Florida beginning Saturday.

RAINFALL: Isaias is expected to produce the following rain accumulations through Saturday:

Dominican Republic and northern Haiti: 4 to 8 inches, with isolated maximum totals of 12 inches.

Bahamas, Turks and Caicos: 4 to 8 inches.

Cuba: 1 to 2 inches, with isolated maximum totals of 4 inches.

These rainfall amounts will lead to life-threatening flash flooding and mudslides, as well as river flooding. Urban and small stream flooding is expected for the U.S. Virgin Islands and Hispaniola.

From Friday night through Monday:

South Florida into east-Central Florida: 2 to 4 inches, with isolated maximum totals of 6 inches.

These rainfall amounts could result in isolated flash and urban flooding, especially in low-lying and poorly drained areas.

Heavy rains associated with Isaias may begin to affect the eastern Carolinas by early next week. This rain could result in isolated flash and urban flooding, especially in low-lying and poorly drained areas, as well as isolated minor river flooding.

SURF:  Swells generated by Isaias are affecting portions of Puerto Rico, the Dominican Republic, the Turks and Caicos Islands and the southeastern Bahamas. These swells will spread along the coast of Cuba and into the central and northwestern Bahamas later today and along the east coast of Florida on Saturday. These swells are likely to cause life-threatening surf and rip current conditions.