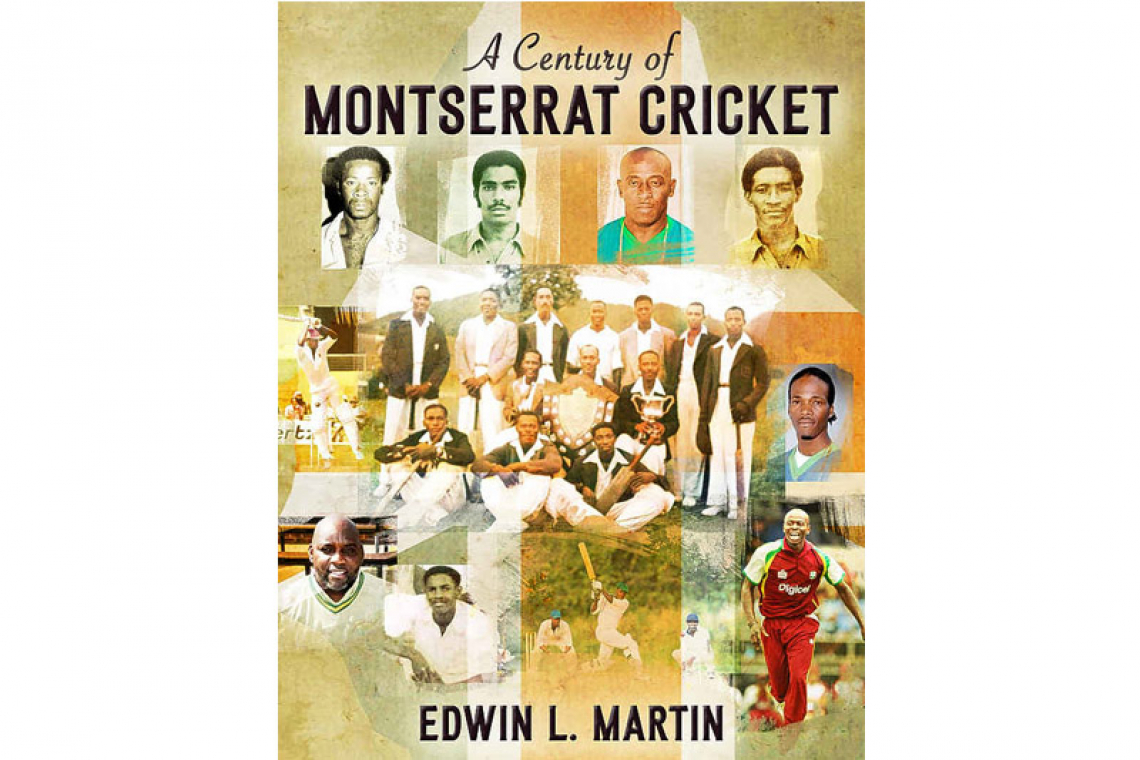 Cover of “A Century of Montserrat Cricket” by Edwin Martin. (Edwin Martin photo)

BRADES, Montserrat--Journalist and calypsonian Edwin “Red Ride” Martin will release his latest work A Century of Montserrat Cricket at the upcoming Alliouagana Festival of the Word (AFW LitFest) in Montserrat, which runs from November 18 to 20.

The book will be one of seven featured releases at the festival’s Author Gala at the Montserrat Arts Council on Saturday, November 20.

A Century of Montserrat Cricket chronicles the history of Montserrat’s national sports pastime over the past 108 years as 1913 marked the advent of the annual Leeward Islands Tournament. The book not only reveals the top cricket stars of the past century, but it also delves into other aspects such as how class, race and religion played a factor in the early years. The publication also includes rare photos, many feature stories, year-by-year results, annual line-ups, and in-depth statistics.

“In 2013 while starting research on my book Stranded Batsman about our most famous cricket star Jim Allen, I visited the Hyde Cricket Club in Central England, where Jim played in the late 1970s and early ’80s. The club provided me with a thick book that covered their history starting in 1901. Hyde is a small club, not a major club like Yorkshire, Lancashire and others. But they still documented their history. I immediately thought to myself, ‘Why don’t we have a similar book about Montserrat cricket history?’ I decided that once I finished the book on Jim Allen that I would write a book on our entire cricket history. I began writing it in August of 2020 during the height of COVID and completed it in September of 2021,” Martin revealed.

The author, who has been a journalist since 1986, worked at the Miami Herald from 1986 to 2016. One of the highlights of his early career came in 1991 when he interviewed the NBA Hall of Famer Michael Jordan. In 2017, Martin published Stranded Batsman: The Jim Allen Story, his first major book. It has been critically praised by several publications, including CricketWeb.Net, which wrote: “Martin has done a splendid job of reconstructing Allen’s story. The story that Martin tells is a thought-provoking one, very well written and thoroughly researched.”

Martin also writes and sings calypso under the Red Ride moniker as a hobby and has entered competitions in Miami, Florida, and Montserrat. He has also published two booklets about Montserrat’s Christmas Festival: Montserrat Festival 45th Anniversary Commemoration in 2007, and Montserrat Festival: This Is Us in 2017. An avid cricket fan, he has interviewed some of the greatest in the sport, including Brian Lara, Sir Garfield Sobers, Sir Viv Richards and Sir Wes Hall. Martin founded

montserratspotlight.com in 2019 to focus on feature stories about Montserrat history.

“Edwin Martin has produced a book that chronicles not just our history from 100 years ago, but our younger athletes will find themselves among the greats. This is how we will build our sports legacy and the Alliouagana Festival of the Word is pleased to celebrate this achievement,” said Nerissa Golden, AFW LitFest Coordinator.

Other authors to be featured at the closing Gala at the Montserrat Cultural Centre are Sir Howard Fergus, former Speaker of the House Shirley Osborne, Psychologist Jennifer Joseph, Entrepreneur Norman Ryan, The Alliouagana Singers and Nerissa Golden.

A Century of Montserrat Cricket will be available for purchase at the Author Gala and online at https://www.montserratspotlight.com/store/A-Century-of-Montserrat-Cricket-p412924040 .