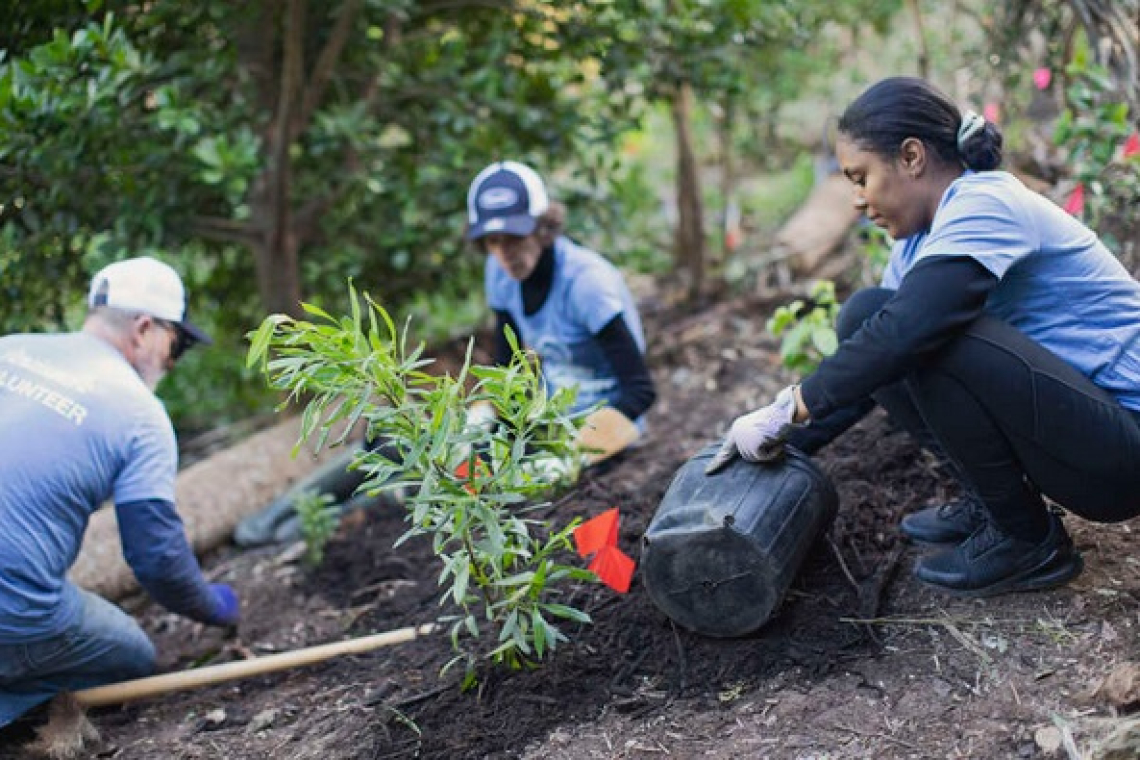 HAMILTON, Bermuda--An effort to establish a series of “micro forests” across the island has established ten thriving plots, according to the Bermuda Zoological Society (BZS).

Celebrating the first year of the Micro Forest Project – first launched in December 2021 – a BZS spokeswoman said the group had planted 1,610 “native-compatible” and endemic plants over the course of 2022.

The Admiralty Park plot was the largest and most recent project, with 305 plants representing 16 native species planted in a 717 square metre plot on December 15. The spokeswoman said that so far, the plant survival rate within the various plots has exceeded 90% with a range of plants including Bermuda Olivewood, Bermuda Palmetto, Bermuda Cedar and Bermuda Snowberry taking up root.

She added that in addition to the planting, 387 volunteers had spent a combined total of 1,101 hours chopping, digging, culling and weeding 32,090 invasive plants.

“We could not care for and safeguard Bermuda’s biodiversity without them,” the spokeswoman said. “Our volunteers come from various backgrounds and age groups, bringing a wealth of skills, knowledge and expertise to the project.”

In addition to support from founding partner RenaissanceRe (RenRe), the spokeswoman noted the project was bolstered over the course of the year by Aeolus, Convex, Vantage Risk, Aspen Bermuda Ltd and the Bermuda Parks Department.

Jeff Manson of RenRe said: “As part of our longstanding commitment to promoting climate resilience, we are proud to be the founding corporate sponsor of the Bermuda Zoological Society’s Micro Forest Project. We look forward to working with the Micro Forest Project to protect endemic plant life in Bermuda, raise awareness of the importance of biodiversity in combating climate change, and cultivate community collaboration to create further impact.”

The BZS spokeswoman said that in order to help restore the island’s valuable ecosystems, the island should continue to plant micro forests on roadsides, at schools and in backyards.

“The BZS Micro Forest Project heads into the second year knowing that micro forests are a powerful way for people to connect with nature,” she said. “This project can involve the entire community and help people think more deeply about their role in alleviating the climate crisis through a shared mission to inspire appreciation and care of island environments. In 2023, we will continue to build on our success to create another 10 micro forests with the goal of planting a further 1,500 native and endemic plants with the support of new partner, HSBC, and their staff volunteers. Together we can make a significant impact to protect and enhance wildlife habitat and biodiversity, absorb carbon, enhance physical resilience from extreme weather events, cool the land and provide the community with methods to get involved in a greener future.” ~ The Royal Gazette ~