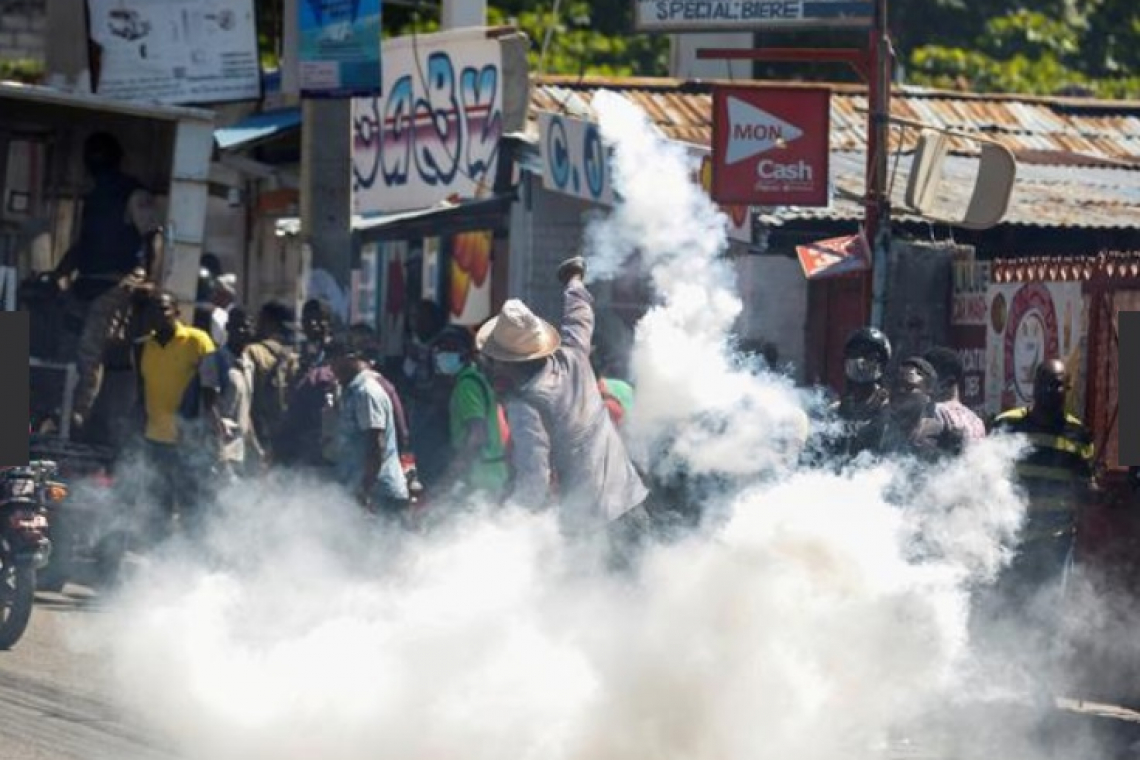 A man throws a tear-gas canister back at the police during a protest against Haiti's President Jovenel Moise, in Port-au-Prince, Haiti, on February 10. Photo credit: Reuters/Jeanty Junior Augustin.

PORT-AU-PRINCE, Haiti--Haitian police on Wednesday clashed with rock-hurling protesters in the capital Port-Au-Prince amid street demonstrations against President Jovenel Moise after his government retired three Supreme Court judges earmarked as his potential replacements.

Police fired tear gas and shot in the air in an attempt to disperse pockets of protesters, who pelted the security officials with rocks, according to a Reuters witness.

“We are back to dictatorship! Down with Moise!” the protesters shouted as music blared from speakers amid chaotic scenes in the poor Caribbean nation of about 11 million people.

The protesters also yelled “Down with Sison,” a reference to US Ambassador to Haiti, Michele Jeanne Sison. Washington has so far backed Moise’s claim that he should step down in February 2022 after presidential elections are held this year.

The latest political tumult in the volatile island nation comes amid a crippling economic crisis and a sharp rise in crime, especially kidnappings for ransom.

The opposition is demanding Moise leave power immediately, accusing him of acting like an authoritarian leader and violating the constitution.

Tensions intensified over the weekend after Moise alleged there was an attempt to overthrow his government. Authorities on Sunday arrested 23 people, including a Supreme Court judge and a senior police official.

On Monday, the government issued an executive decree retiring the arrested judge and two other Supreme Court justices.

All three had been approached by the opposition as possible interim leaders to replace Moise and head a transitional government. In the end, the opposition chose magistrate Joseph Mecene Jean Louis (72).

The opposition says Moise should have stepped down on February 7, when they say his five-year term in office expired, following disputed 2015 elections.

Moise rejects that, citing a term that began in February 2017 after he won fresh elections in 2016. He has pledged to step down in February next year.

A group of journalists on Wednesday also complained to security officials about heavy-handed policing.

Two journalists covering the protests received minor injuries when the police dropped a tear-gas canister into a pickup truck labelled as media, which was transporting journalists, according to reporters and television footage.

Police could not immediately be reached for comment. ~ Reuters ~