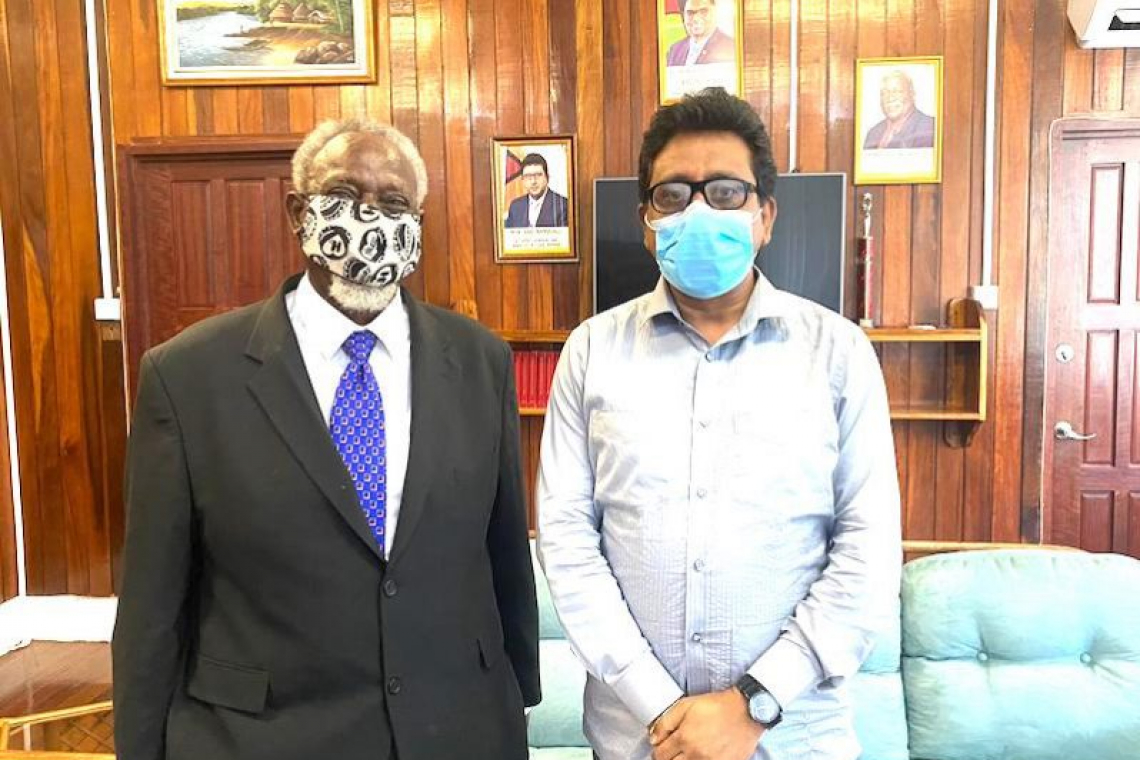 GEORGETOWN, Guyana--A proposal to revamp Guyana’s arbitration laws and practice has been accepted by the government of Guyana. The Attorney General and Minister of Legal Affairs, Anil Nandlall has engaged the services of retired Justice of the Supreme Court of Belize, Courtney Abel, to undertake the task of upgrading Guyana’s existing arbitration legislation and make recommendations on developing the country into an arbitration empire.

Arbitration is a form of an alternative method of dispute resolution (ADR). It is a private procedure, whereby parties involved in a dispute, submit the dispute to one or more arbitrators, mutually agreed upon, and the arbitrator makes a legally binding decision on the matter. Because of the adversarial nature of the court system, it is usually a last resort option for the commercial industry and arbitration is extensively preferred, due to its confidential and time-saving nature.

Justice Abel, a prominent legal practitioner within the Caribbean, will review all of Guyana’s existing laws and regulations in the subject area and make appropriate recommendations for the repeal, reform and passing of new laws. He has so far recommended that Guyana sign onto and ratify into its domestic jurisdiction, The United Nations Commission on International Trade Law UNCITRAL Model Law on International Commercial Arbitration (1985); the United Nations Convention on the Recognition and Enforcement of Foreign Arbitral Awards (New York Convention); the Inter-American Convention on International Commercial Arbitration (Panama Convention); and the United States Bilateral Investment Treaty (USBIT).

The implementation of the recommendations will be the first part of Guyana stepping onto the world stage and becoming up to par with international arbitration arrangements. Justice Abel is a Guyanese, who has practised privately on a broad range of matters in the UK, Anguilla and the Caribbean and has made appearance before the Judicial Committee of the Privy Council. He was twice elected and served as President of the Anguilla Bar Association, served as Secretary, Vice-President and as President of the Organisation of Eastern Caribbean States (OECS) Bar Association and as Treasurer and President of Organisation of Commonwealth Caribbean Bar Associations (OCCBA), as well as Vice-President of the Anguilla Financial Services Association. Justice Abel was also instrumental in the drafting of the Arbitration Act and Arbitration Rules of Belize and was the Chairperson for the Belize Court-Connected Mediation and Arbitration Programme.

He expressed that he “very much hopes by his involvement in, what for him is a grand idea for Guyana’s development, he would be able to build confidence in international investors that Guyana is a competent, gold standard arbitration venue; a regional arbitration hub or centre and a commercial gateway to South America, from within the Caribbean.” Minister Nandlall is of the opinion that the current developments will not only have a monumental impact within the local jurisdiction, but will also foster regional and international confidence in Guyana becoming a first-class commercial dispute resolution destination. Previously speaking to the Guyana Chronicle on November 18, Nandlall indicated that “if one is to look at the contracts and the documents emanating from the sector, you will see that there’s a consistent provision for disputes to be resolved by arbitration.” The current domestic legislation to facilitate arbitration is the Arbitration Act 1919, with minor amendments.

As a result of this archaic law, investors are deterred to undertake methods of alternative dispute resolution within Guyana. The attorney general previously expressed to this publication that, that is not conducive to Guyana’s growth and development and there is a wealth of opportunities associated with this being facilitated locally. “As a government, it is our responsibility to ensure that these disputes are resolved here, so that, first of all, it will be quick; secondly, it will be less expensive, and thirdly, there are great benefits which can be derived from the disputes being resolved here. It will provide jobs for people; it will generate income, and it will make Guyana an attractive litigation and arbitration destination,” Nandlall previously told this publication. The minister of legal affairs and Justice Abel both recognise that the public must be kept fully informed of the whole proposed arrangement and as this move towards arbitration advances. They both acknowledge that the public, including court users, parties to disputes, court officers and administrators as well as businesses, would benefit from continuous sensitisation by way of public education, as to the customs and practices of arbitration. ~ Guyana Chronicle ~