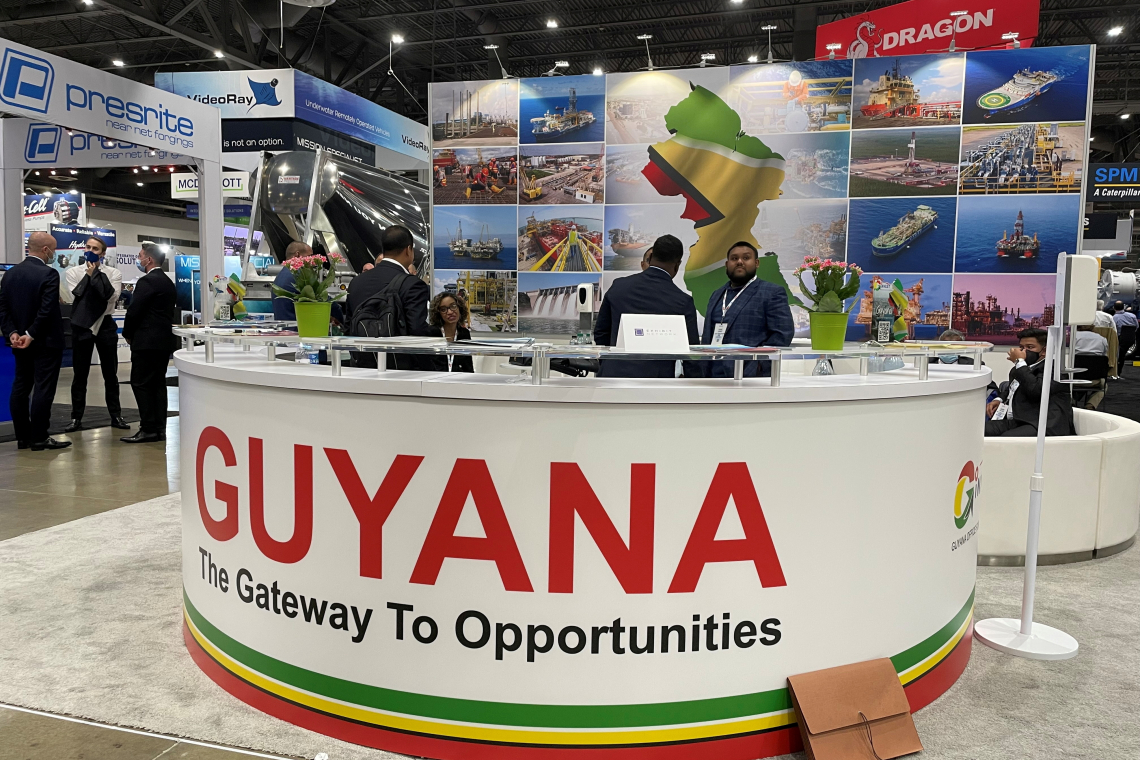 Guyana’s booth is seen at the Offshore Technology Conference as Bharrat Jagdeo, the South American nation’s vice president told the conference it would be unfair to ask the developing nation not to develop its burgeoning oil resources, in Houston, Texas, US, date unknown. File photo credit Reuters/Sabrina Valle.

Latin America’s newest oil producer on Thursday launched a low-carbon strategy ahead of the UN’s COP26 climate conference, that will move the country to cleaner sources of energy as its offshore oil industry ramps up.

Guyana’s power demand is forecasted to triple in the next five years along with a booming economy. Proposed thermoelectrical and hydropower projects will serve people living along the coast, while solar power will meet the indigenous communities’ demand.

“Cheaper electricity will be supplied, and that supply can increase five-fold with emissions staying essentially flat,” Ali said during the announcement of the clean energy initiative.

Guyana’s transmission and distribution lines also will undergo upgrades. Demand on its main power grid, which supplies 78 per cent of the country’s energy needs, is expected to rise to 415 megawatts (MW) in 2025 from 126MW last year, the president said.

Guyana has some of the highest electricity rates in the region, but power outages are frequent. Many manufacturers have opted to generate their own electricity.

Most Guyanese live along the coast, where power is generated from old diesel plants that are mostly in need of upgrade or replacement. The nation, which depends about 97 per cent on imported fossil fuels, spent US $100 million to generate electricity last year.

A group of towns that are the gateway to the country’s gold and diamond mines will be exclusively powered by renewable energy at the end of 2027, according to the plan.

In its second phase from 2027 to 2032, the incremental demand will be met by wind and solar projects replacing fuel oil power plants. A second hydro project is in the planning. ~ Reuters ~