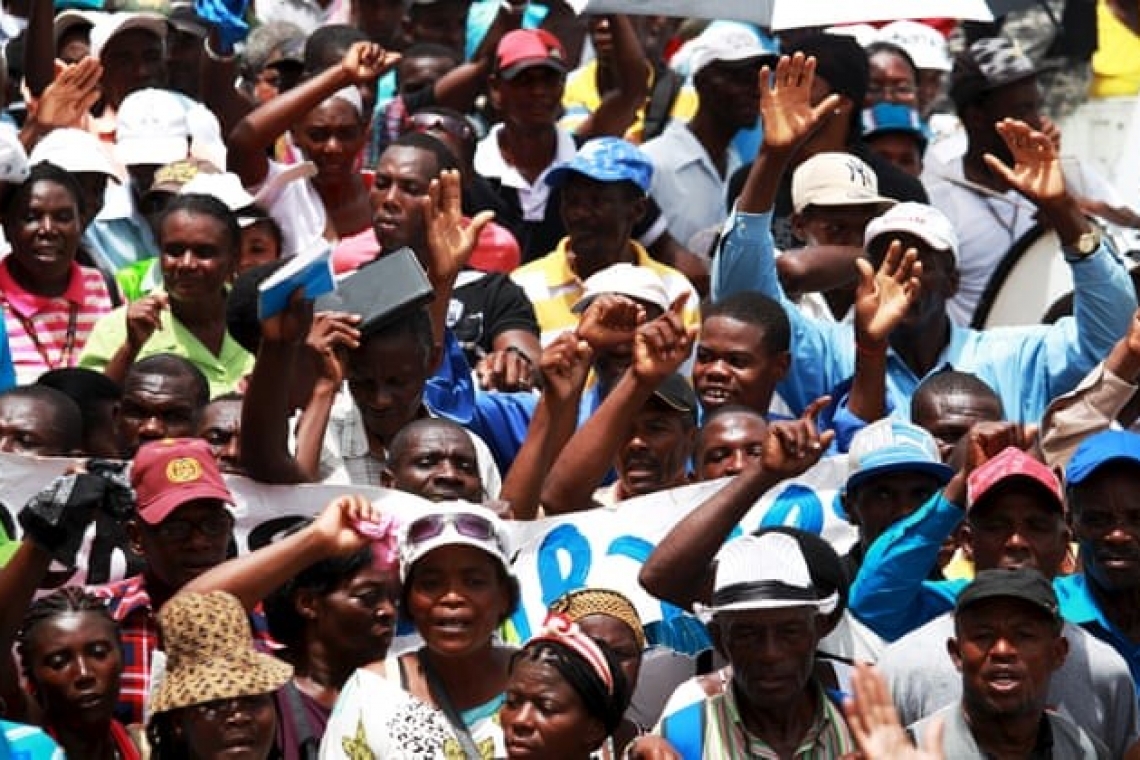 Hundreds of Haitians participate in a march in Santo Domingo in 2015 against a new migration law. The Dominican Republic has a history of anti-Haitian racism. Photo credit: Ricardo Rojas/Reuters.

SANTO DOMINGO, DR--As demonstrations were held around the world against racism and police brutality, a group of protesters arrived last week at Santo Domingo’s Parque Independencia to honour the memory of George Floyd, the African American man killed by Minneapolis police.

The vigil had been convened by Reconocido (Recognised), a local organisation that describes itself as made up primarily of Dominicanos of Haitian descent – a group that routinely faces racist discrimination.

But counter-protesters were waiting for them: an ultranationalist organisation dubbing itself the Antigua Orden Dominicana (Old Dominican Order) had called on social networks for people to come out and “defend against the Haitian invasion.”

As Reconocido members tried to hold their event, the counter-protesters shouted invective at them. Police officers stood by, and when they eventually intervened, it was to bundle Reconocido’s leader Ana María Belique and another activist off to jail.

“What happened shows the levels of intolerance that exist here regarding the issue of race,” said Belique, who was released hours later without charges. “Perhaps if George Floyd was not black and if we were not an anti-racist collective, it might be different. Because everything black in this country evokes Haiti – as if it were an affront to this nation that turns its back on its black identity.”

The Dominican Republic (DR) shares both the island of Hispaniola and an uneasy history with Haiti – the country from which it gained its independence in 1844. It has traditionally provided an escape valve for Haitians fleeing political upheaval and economic desperation at home, even as they are sometimes viewed – often unfairly – as competing with poor Dominicanos for low-wage jobs.

The global wave of Black Lives Matter protests reached the Dominican Republic as the country approaches the July 26 presidential elections that some believe may put an end to 24 years of nearly uninterrupted governance by the Partido de la Liberación Dominicana (the Dominican Liberation party, or PLD).

The PLD first took the presidency in 1996 through a Faustian bargain with the long-time caudillo Joaquín Balaguer, after a campaign marked by fraud and racist incitement that finally saw Leonel Fernández take the presidential sash.

With the PLD now beset by various scandals – and bitterly divided between wings loyal to current president Danilo Medina (in office since 2012 and running the former government Minister Gonzalo Castillo as his successor) and Fernández (who is mounting his own presidential campaign at the head of the Fuerza del Pueblo coalition) – polls suggest the ballot may be won by Luis Abinader of the opposition Partido Revolucionario Moderno (PRM) (Modern Revolutionary Party).

What this may mean for the discourse on race in the Dominican Republic remains to be seen. The country’s agriculture, tourism and construction sectors largely depend on immigrant Haitian labour, but over the last decade, generations of Dominicanos of Haitian descent have seen a series of court rulings gradually strip them of their nationality.

“Even the political parties that have been seen as more friendly on these issues have been quiet,” said Amarilys Estrella, a visiting professor with the Department of Social and Cultural Analysis at New York University.

“All of this silence allows for the amplification of a small group of ultra-nationalists who are anti-Haitian and also anti-black. Even people who might not agree with what is happening might not speak out because they fear they might be a target.”

That fear is rooted in history: an October 1937 speech by the dictator Rafael Trujillo launched a pogrom against Haitians in the country, which would eventually become known as “the Parsley Massacre” or el Corte (the Cutting). At least 10,000 and perhaps up to 20,000 Haitians died during a weeks-long paroxysm of genocidal rage.

Acts of public violence against Haitians in the DR still happen from time to time, with one of the better-known recent cases being the lynching of a Haitian man in the northern city of Santiago in 2015.

However, protests against corruption and electoral meddling that shook the country earlier this year saw a multiracial and often quite youthful front taking to the streets in what many observers agreed was an unprecedented show of civic discontent that may be a harbinger of future change.

“The young people are in many ways attuned to transnational networks and conversations,” says Lorgia García Peña, an associate professor in the Department of Romance Languages and Literatures at Harvard University.

“The language that is being used right now is purposeful. There has been a more global contextualisation of the intersection of race, class and economic exploitation that this young generation is much more aware of.” ~ The Guardian ~