Cubans sweating in darkness as govt. scrambles to end blackouts 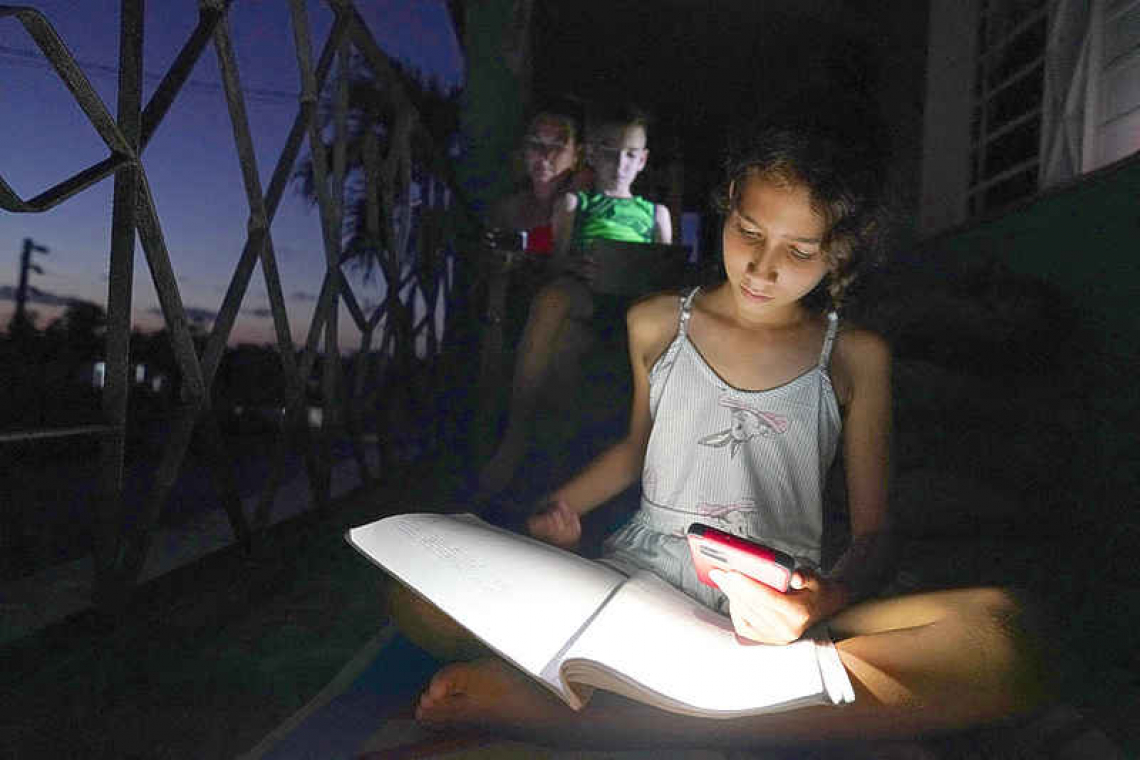 Emily Villega (10) does her homework using the light of a cell phone on the balcony of her home during a blackout in Guanajay, Cuba, on June 17. Photo credit Reuters/Alexandre Meneghini.

Her children must do homework by the dim light of a cell phone. The hum of the refrigerator goes quiet. Fans to temper the heat on the sultry Caribbean island stop.
“It drives you crazy,” she told Reuters, sweating even as the sun dipped toward the horizon. “If this goes on, I don’t know what we will do.”
Summertime outages, when demand is highest, are nothing new to residents of the Communist-run island. But a convergence of pressures from high fuel prices to the lingering economic toll of the pandemic are now straining the country’s already frail grid.
“It’s like a perfect storm,” said Cuban economist Ricardo Torres. “Now summer is here and the blackouts are back.”
The hours-long outages, which began earlier this year and have spread across all the country’s provinces, touch a political nerve in Cuba and are widely seen as the tipping point that led to anti-government protests last July, the largest since Fidel Castro’s 1959 revolution.
The administration of Cuban President Miguel Díaz Canel has made no secret of the problems – or the agitation they cause.
His government, already pressured by food, fuel and medicine shortages, is scrambling to repair its two largest power plants – Antonia Guiteras and Felton – lynchpins in the system that recently experienced major malfunctions.
Last week, the president appeared on national TV, lecturing with charts and graphs on the technical difficulties faced by each of the country’s oil-fired power plants. This week, he has toured several provincial power plants.
Ramiro Valdes, a confidant of the late Castro, appeared on TV in military garb together with Díaz Canel, encouraging Cubans to cut back on electricity use and show their “revolutionary” fervour.
Analyst Torres says those messages may no longer resonate with Cubans the way they once did.
“The people have been receiving one bit of bad news after another for the last four or five years and they are exhausted. They want answers.”

‘Band-Aids’
Cuba has for over two decades relied on Venezuelan fuel oil for its largest power plants, and diesel for feeding a myriad of smaller, distributed generation plants.
But Venezuela is itself struggling to keep up with domestic demand, which is returning to pre-pandemic levels, slowing the flow of much-needed oil to Cuba.
Cuban officials have blamed fuel shortages, deferred maintenance and difficulties processing heavy sour Cuban crude, also burned at its plants, for hobbling generation. Those issues, officials say, have been exacerbated by the US Cold War-era embargo on Cuba, which complicates financing and purchase of parts, fuel and capital investment.
Jorge Pinon, an energy analyst from the University of Texas at Austin, said Cuba’s response to the current crisis was more of the same – but that the stakes are getting higher as fuel shortages and aging equipment take their toll.
“What we are seeing today are Band-Aids,” he said. “In my view, there is a high probability that we will see a total collapse of the Cuban electrical grid this summer.”
Díaz Canel told Cubans last week his government is negotiating with an allied country to build new plants, but warned that such investments “are extremely costly for the country and take years.”
The president said the repair and maintenance work already underway will nonetheless bear fruit by early July, lending renewed stability to the grid for the coming summer.
Iriel Victores, a 34-year-old farm worker in Guanajay, who leaves his home early, in the dark, and often returns home to the evening blackout, is less optimistic.
“If it’s like this in June, I imagine it will be worse in July and August,” said Victores. ~ Reuters ~