Cuba aims to inoculate 90 per cent of residents against COVID by Dec. 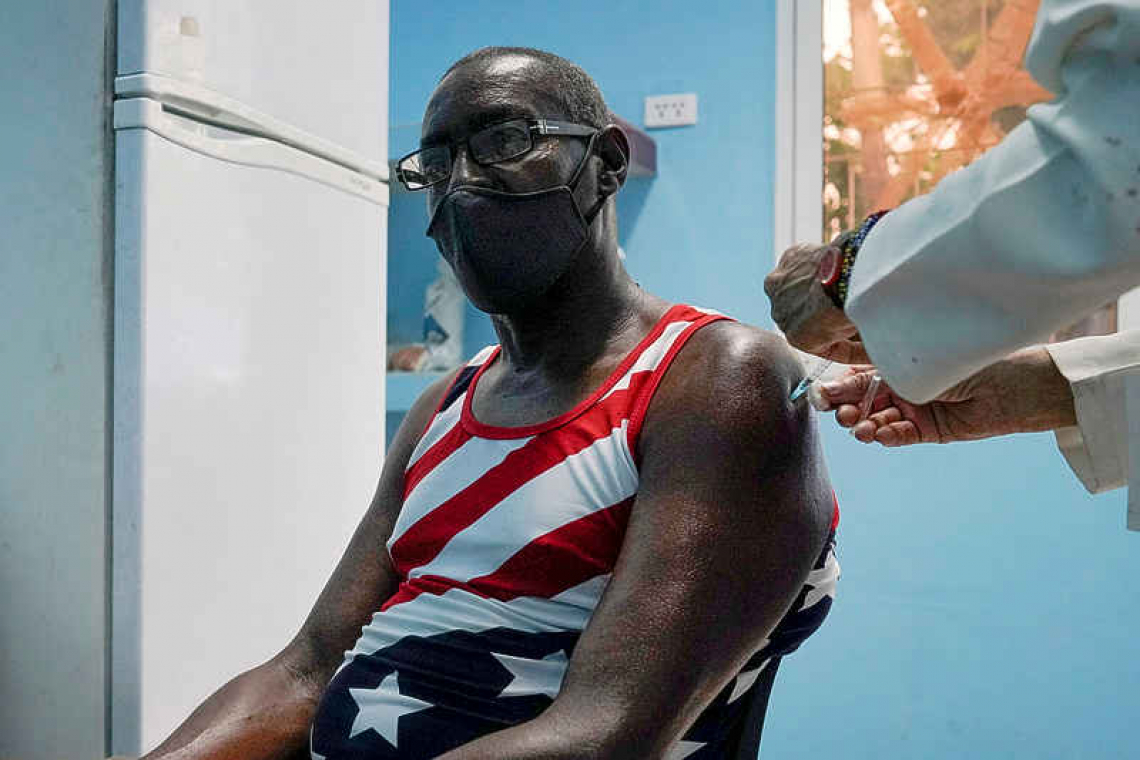 A man is vaccinated at a vaccination centre amid concerns about the spread of the coronavirus disease COVID-19 in Havana, Cuba, on June 17. File photo: Reuters/Alexandre Meneghini.

HAVANA, Cuba--Cuba is speeding up its COVID-19 vaccination programme as it aims to fully inoculate ninety per cent of its population against the coronavirus by December, an ambitious goal that has yet to be reached by even wealthier nations.

The health ministry reported on Thursday that more than 80 per cent of Cuba’s 11.3 million people had received at least a first shot of a three-dose immunisation regimen with Cuban-made vaccines Abdala, Soberana-2 or Soberana-plus.

Close to 50 per cent were fully vaccinated, it said – well ahead of the global average of 34 per cent, according to the Our World In Data website.

The government has said Cuba is on track to become the first country to inoculate so much of its population with its own vaccines. It is administering them to those as young as two years old after clinical trials testing them on children. The United States by comparison has yet to authorise COVID-19 vaccines for anyone younger than 12.

Currently Cuba is lagging China, which has fully inoculated an estimated 79 per cent of its population with its own vaccines. But Cuban authorities are vaccinating at a faster clip per capita.

“We will be the first in the world to reach everyone with our own vaccines,” Ileana Morales, Director of Science and Innovation at the health ministry, said on state television.

State developer BioCubaFarma said its vaccines reduce serious illness and death by 90 per cent, even if breakthrough infections are possible.

It has not yet published data supporting that claim for the scientific community to review.

“It will be a unique case in the world,” said Jose Moya Medina, the Pan American Health Organization’s representative in Cuba. “I hope and think Cuba will be an example for all countries in the world as only full vaccination can stop the pandemic and possible emergence of more dangerous variants.”

Cuba missed its early vaccination targets – partly due to US sanctions hampering production, the government said – and suffered one of the world’s worst COVID-19 outbreaks in July and August, fuelled by the highly contagious Delta variant of the virus.

But the government said this month that BioCubaFarma had produced enough shots to fully vaccinate the entire population.

Getting ready for tourism

The cash-strapped country, which boasts pristine beaches and towns with colonial-era architecture, is banking on success to fully open its borders by mid-November for the tourism high-season.

Its vaccination campaign could give it an advantage over other countries in the region – one of the world’s most reliant on tourism – which is struggling with surging cases in part due to vaccine scepticism and low uptake.

Cuba is already lifting domestic restrictions in heavily vaccinated provinces, including Havana, as it tries to revitalise an economy severely battered by the pandemic, US sanctions and domestic inefficiencies.

Shortages of food, medicine and just about every consumer good have led to severe hardship for many, on top of pandemic lockdowns, layoffs and inflation.

Cases and deaths per 100,000 residents in Havana, where around 80 per cent of adults are vaccinated, are less than 20 per cent of what they were two months ago, according to official data, and far below those in the rest of the country.

In 2020, Cuba’s pandemic response outperformed that of most countries. This year, however, the Delta variant swept through the populace and, in some provinces, overwhelmed its much-acclaimed health services. At one point, Cuba had the highest per capita infection rate in the world, as daily cases peaked at nearly 10,000 in July, with 98 deaths.