CARICOM SG: Debt reduction must be part of post-COVID-19 response 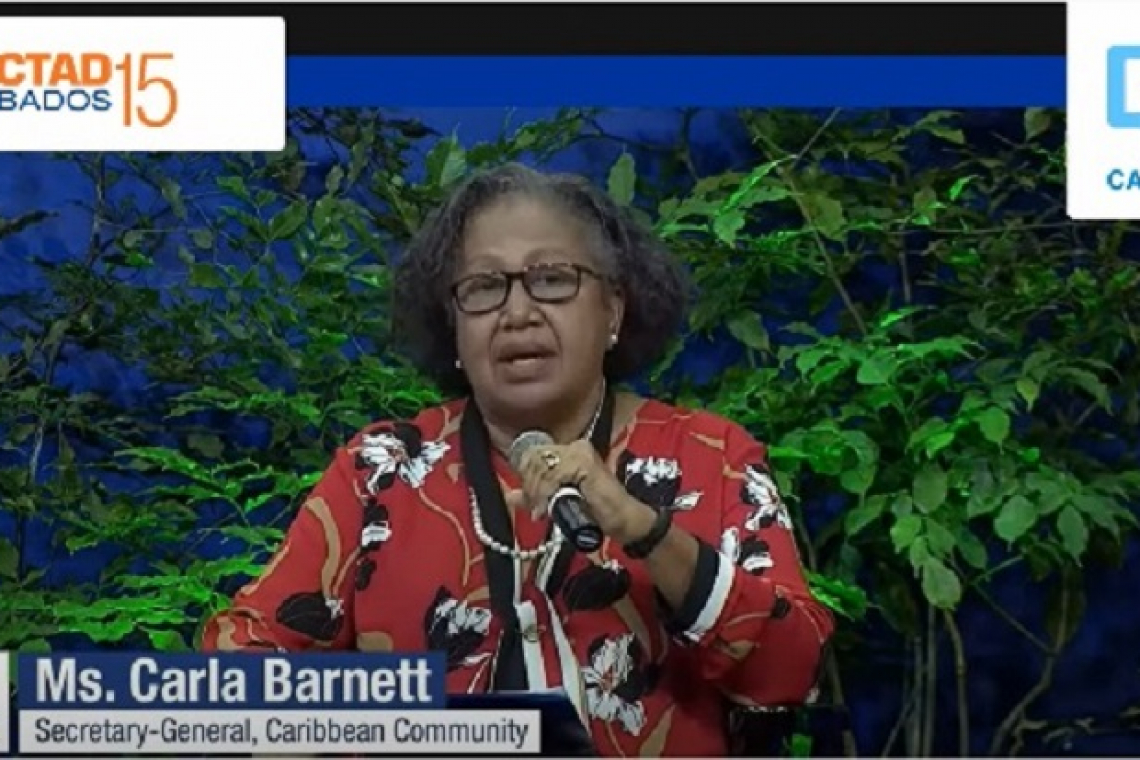 GEORGETOWN, Guyana--An effective response to the post-COVID-19 economic situation must include significant and broad debt reduction for all developing countries, including vulnerable middle- to high-income states. This was one of the prescriptions put forward by Caribbean Community CARICOM Secretary General (SG) Carla Barnett as she participated in a panel discussion during the World Leaders Summit Dialogue on Inequality at the United Nations Conference on Trade and Development (UNCTAD) XV in Barbados, on Tuesday, October 5.

Speaking on the theme of the discussion “Is the COVID-19 crisis really a game changer?” Dr. Barnett further stated that debt reduction should specifically address debts built up due to COVID-19 expenditures and climate change adaptation.

The CARICOM SG said the meeting provided an opportunity to highlight to the global community the issues and concerns of small island and low-lying coastal developing states (SIDS) as well as to identify some of the measures that could be taken by the international community to support efforts to build resilience and promote sustainable development among SIDS. She pointed out that SIDS experienced gross domestic product (GDP) contraction in 2020 at about three times the global rate.

“We applied funds that were budgeted for other purposes to meet the needs of the health sector for [personal protective equipment – Ed.] PPEs, medical equipment, testing supplies and vaccines. We shifted funds to meet basic social safety nets. We repurposed loans and borrowed additional funds. Already high debt burdens grew even higher,” Dr. Barnett pointed out.

Dr. Barnett said that while the G-20 Debt Service Suspension Initiative (DSSI), which allowed developing countries to temporarily suspend debt service payments to their official bilateral creditors, had potential, it did not cover all middle- to high-income developing countries, many of which are SIDS.

“New debt arising from the need to address the COVID-19 crisis together with the existing debt stock will continue to appropriate a significant proportion of public resources in debt repayments, while strangling critical infrastructural public investments required for economic rehabilitation,” the SG stated in making a case for debt reduction.

The situation was even more challenging for many SIDS as they cannot access multilateral and bilateral concessional aid financing because of their relatively high per capita income status.

“With the reality of our vulnerabilities exposed by the COVID and climate crises, the call for a more appropriate basis for determining access to concessional financing takes on great urgency. We have to continue to press for the continued development and acceptance of the Multi-Dimensional Vulnerability Index (MVI). The issue of access to concessional resources for development financing and resilience building remains a significant priority for CARICOM States, indeed, for all SIDS,” Dr. Barnett stressed.

She called on the UN system to intensify collaboration with relevant regional institutions, particularly in the Caribbean, the Pacific and the Indian Ocean, in order to make this index a reality. She also called on the International Monetary Fund (IMF), the World Bank and bilateral and multilateral development partners to step away from the “blinders of GDP per capita.” GDP per capita cannot be a measure of development, let alone sustainable development, she added.

Dr. Barnett said that new policy options to assist developing countries had to be developed as the traditional policy menu of the international financial institutions did not adequately address the inherent vulnerabilities and fragilities of such countries. “That policy menu will certainly be inadequate as the foundation for the design of recovery models that can build transformative and resilient economies in the face of global climate change,” she said.

Looking forward to COP 26, the UN Climate Change Conference scheduled for next month in Glasgow, Scotland, the CARICOM SG stated that for SIDS like CARICOM, “1.5 to Stay Alive” was more than a catchy slogan, “it is an existential reality.”

“We therefore have to be focused on pushing COP26 to be decisive in order to keep the pathways to achieving the goals of the Paris Agreement alive and translating commitments to real action on the ground,” Dr. Barnett emphasised.

She referred in particular to the pledges to the Green Climate and Adaptation Funds, which she insisted must be honoured and increased to ensure that the most vulnerable could adapt to and survive the effects of climate change.