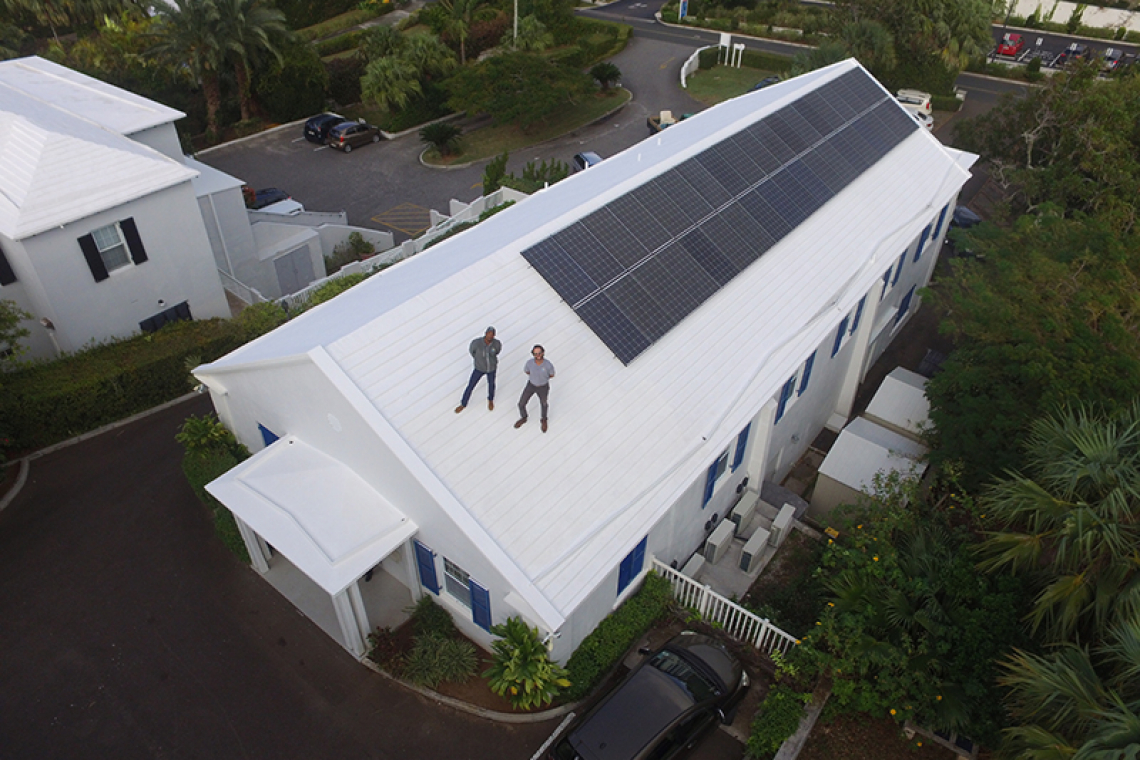 Two men stand on the roof of the PALS building that is home to a new solar energy system.

HAMILTON, Bermuda--BE Solar recently installed a solar electricity system on the roof of local cancer charity PALS, with the solar system expected to help the charity save over US $6,000 per year.

A spokesperson said, “Renewable energy company BE Solar successfully won a competitive process to install an 11.97 kilowatt solar electricity system on the roof of local cancer charity PALS in Paget. The solar system was recently installed and will help the charity save over $6,000 each year by relying less on fossil fuel electricity and producing their own clean, renewable energy from the sun.

“Four Bermudians and two spouses of Bermudians helped to install the solar system on time and on budget without impacting the daily operations at PALS.

“The vision of BE solar is an efficient Bermuda powered by affordable renewable energy and the company is continuing to foster partnerships with non-profit organisations that are helping people in Bermuda.”

Director of Development Stratton Hatfield said, “We are so proud to have partnered with PALS to deliver another high quality solar solution for such a great and beneficial charity in Bermuda.”

The spokesperson said, “The solar system was designed to allow for future expansion and the first phase is made up of 38 high efficiency 315-watt Peimar solar panels that are warranted for 30 years and manufactured in Italy. Thirty-eight Enphase micro-inverters were also installed to not only invert the solar energy into usable electricity on the property but to also allow PALS to easily monitor the solar energy production.

“The Enphase micro-inverters are designed to have silent back-up battery storage incorporated into the property at any point in the future. The system is projected to save PALS over $185,000 in the next 30 years while also helping to reduce 610 barrels of oil from being burnt at [Bermuda Electric Light Company – Ed.] BELCO.

“The project was led by Bermudian solar installer Tre Govia, who has been working with BE Solar since 2010. He described the project as being very straightforward with an accessible roof that allowed for a simple installation.”

Govia said, “This first phase is great for PALS and as the roof is so large and oriented south, it’s ideal for a second phase sometime soon.”

The spokesperson said, “Tre expressed how he looks forward to collaborating with PALS and the BE Solar team to install more solar on the property in the future.”

Executive Director Colleen English DeGrilla said, “We are so thankful to be working with BE Solar to reduce our carbon footprint and achieve cost efficiencies for PALS. PALS is a cancer care charity that has provided our services to cancer patients in Bermuda for over 40 years.

“We never charge a patient or their family for our services and we receive no government grants. The cost savings achieved through this partnership will directly benefit our clients as well as making an impact in the community. We are grateful for the BE Solar efficiency and excellent customer service.” ~ Bernews ~