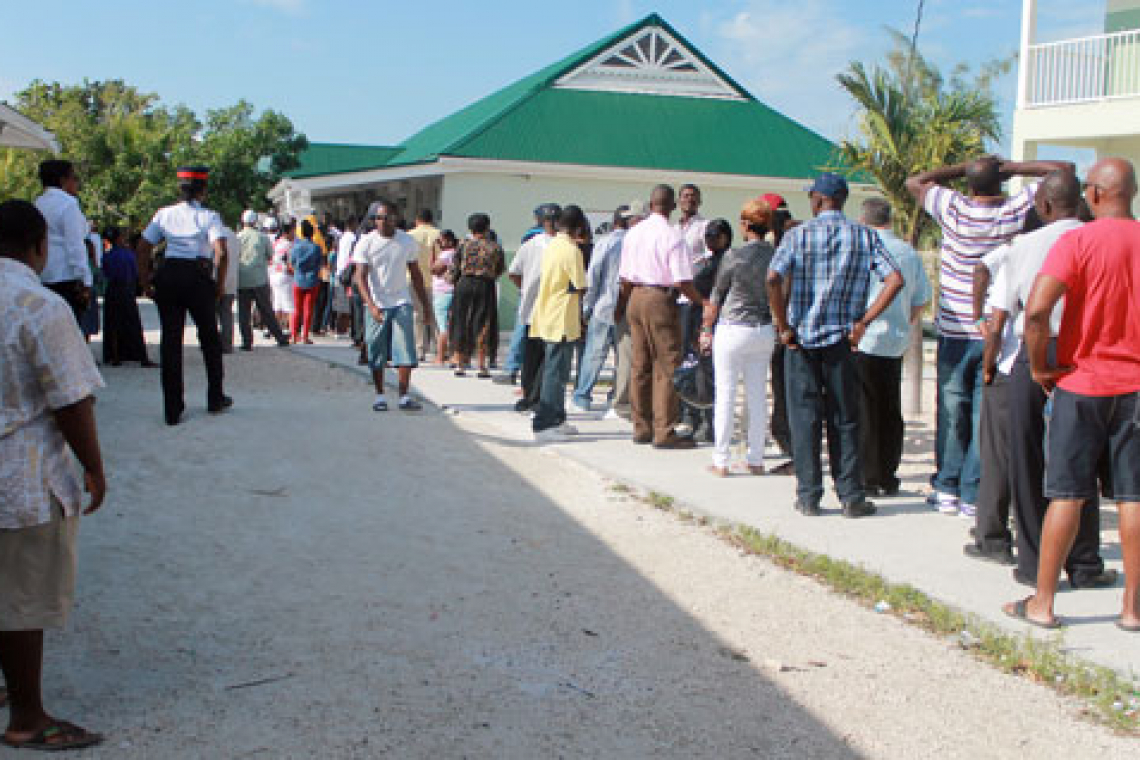 Voters line up to vote in a prior election in the TCI.

COCKBURN TOWN, TCI--COVID-19-positive people will be allowed to cast their ballots early in the upcoming general election, thanks to amendments to the Turks and Caicos Islands (TCI) Elections Ordinance.

The Elections Commission is proposing several changes to the ordinance to accommodate advance COVID-19 and quarantine voting.

These proposed amendments were released for public input last week and Supervisor of Elections Dudley Lewis has urged the general public to participate in providing feedback.

In a copy of the amendments, seen by the Weekly News, Lewis said the consultation on the amendment for advance polling had already been done.

However, this further amendment to the ordinance is in light of COVID-19 being present in the Islands and the fact that general elections are due to be held this year or early next year.

“It will give persons who are tested positive with COVID-19 or under quarantine, the opportunity to exercise their constitutional right to go to the polls and vote during advance polling,” the elections supervisor said.

The proposed amendment to allow advance polling states that an advance poll may be held one day prior to the day named as the polling day and it shall be lawful for a voter to record his vote at an advance poll in the midst of a pandemic, if the voter has tested positive for the disease or has been placed under quarantine by order of the chief medical officer.

It further states that a voter who wishes to vote at an advance poll shall, not later than 10 days after the issue of a writ of election, make an application for approval to the supervisor.

A voter who is approved to vote at an advance poll shall be allowed to vote in like manner as he would have been entitled to do on the day appointed for taking the poll, except that he shall not be allowed to do so unless he produces proof of approval for such.

Meanwhile, protocols have been put in place by the chief medical officer to regulate and control persons with COVID-19 and persons under quarantine.

However, additional health protocols have been instituted for voters who tested positive for COVID-19 or are under quarantine, and are desirous of attending polling stations to vote in advance polls.

The protocols established for COVID-19-positive people and those under quarantine to vote state that the voter must prepare and submit to the supervisor a request to vote in the advance poll.

Before leaving isolation, the voter must notify the Ministry of Health officials.

Except as otherwise directed by the supervisor or returning officer, when the voter is at the polling station he or she must wear an N95/KN95 mask fitted to cover the nose and mouth, a face shield, gloves and disposable gown.

As far as is reasonably practicable, for the duration of time when the person is out of isolation, he or she will be required to maintain social distancing of six feet from other voters at the polling station.

Poll workers will be trained in the use of personal protective equipment (PPE) to assist voters who are positive for COVID-19, inclusive of those in quarantine or isolation.

Polling stations will be deep-cleaned after COVID-19-positive persons have voted.

Lewis further advised that the advance poll will be held one day prior to polling day at polling stations located in the 10 electoral districts between the hours of 8:00am and 4:00pm.

He requests that members of the public submit feedback on these proposed amendments to the Elections Ordinance by email or hard copy document, to Lister Dudley Lewis, Supervisor of Elections, SPPD Office Complex, South Base Grand Turk or email

The consultation began on Thursday, October 8, and will close on October 21. ~ Turks and Caicos Weekly News ~