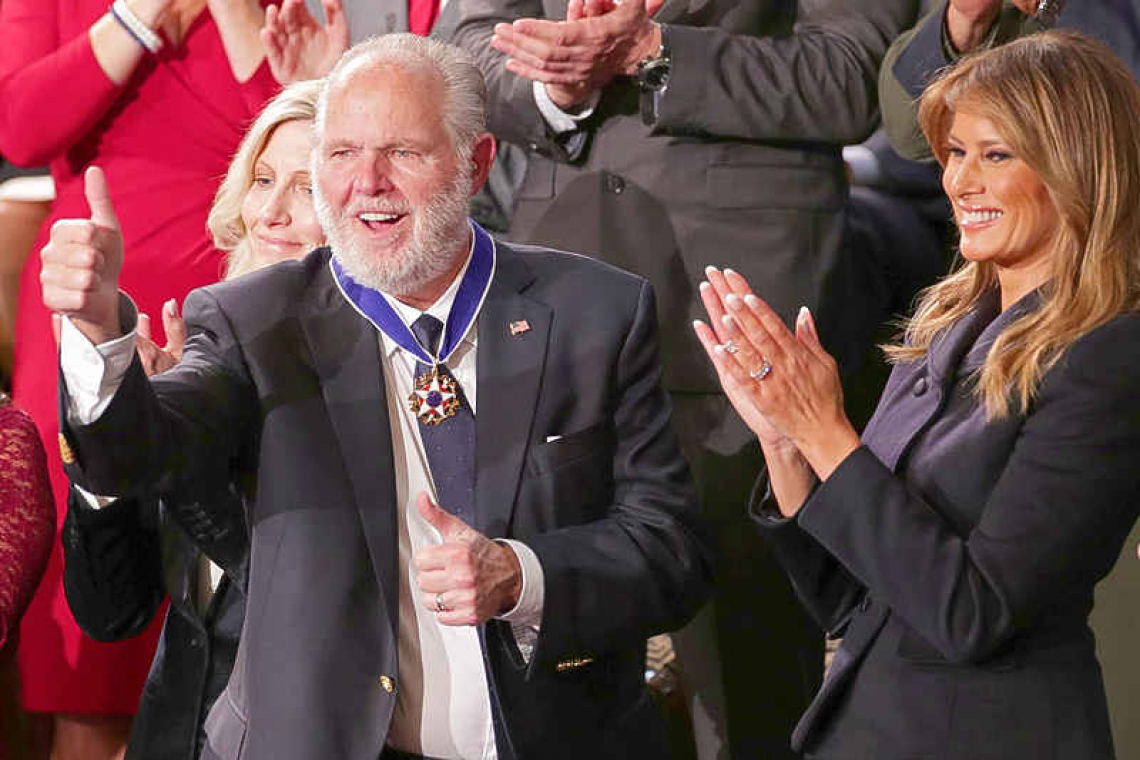 WASHINGTON--Provocative and polarizing U.S. talk radio luminary Rush Limbaugh, a leading voice on the American political right since the 1980s who boosted, and was honoured by, former President Donald Trump, has died at age 70 after suffering from lung cancer, his wife said on Wednesday.

Limbaugh, who pioneered the American media phenomenon of conservative talk radio and became an enthusiastic combatant in the U.S. culture wars, disclosed in February 2020 that he had been diagnosed with advanced lung cancer. In a statement announcing his death, his wife Kathryn Adams Limbaugh said, "Rush's love for our country, and for all of you, will live on eternally."
Limbaugh's appeal and the success of his top-rated daily radio show arose from his brash and colourful style, his delight in baiting liberals and Democrats and his promotion of conservative and Republican causes and politicians. His show became nationally syndicated in 1988 and quickly built a large and committed following, making him wealthy in the process.
He was loathed by liberals. Detractors such as Democratic former Senator Al Franken - a former comedian who wrote a book titled "Rush Limbaugh Is a Big Fat Idiot and Other Observations" - criticized him as a divisive figure who distorted facts.
Trump, a former reality TV personality with a showman's instincts who pursued right-wing populism during four years in the White House, awarded Limbaugh the highest U.S. civilian honour - the Presidential Medal of Freedom - during his 2020 State of the Union address to a joint session of Congress.
First lady Melania Trump placed the medal around Limbaugh's neck after her husband lauded him as "a special man beloved by millions of Americans" and "the greatest fighter and winner that you will ever meet." Underscoring Limbaugh's divisiveness, some Democratic lawmakers were heard groaning "oh no" while House of Representatives Speaker Nancy Pelosi, one of his favourite punching bags, sat in stony silence.
Trump, a Republican, honoured Limbaugh a day after the radio star announced his cancer diagnosis. Limbaugh at the time said he planned to continue doing his programme "as normally and as competently" as he could while undergoing treatment.
His show was heard on more than 600 U.S. stations by, according to Limbaugh's website, up to 27 million people weekly. According to Forbes, Limbaugh was paid $85 million in 2020.