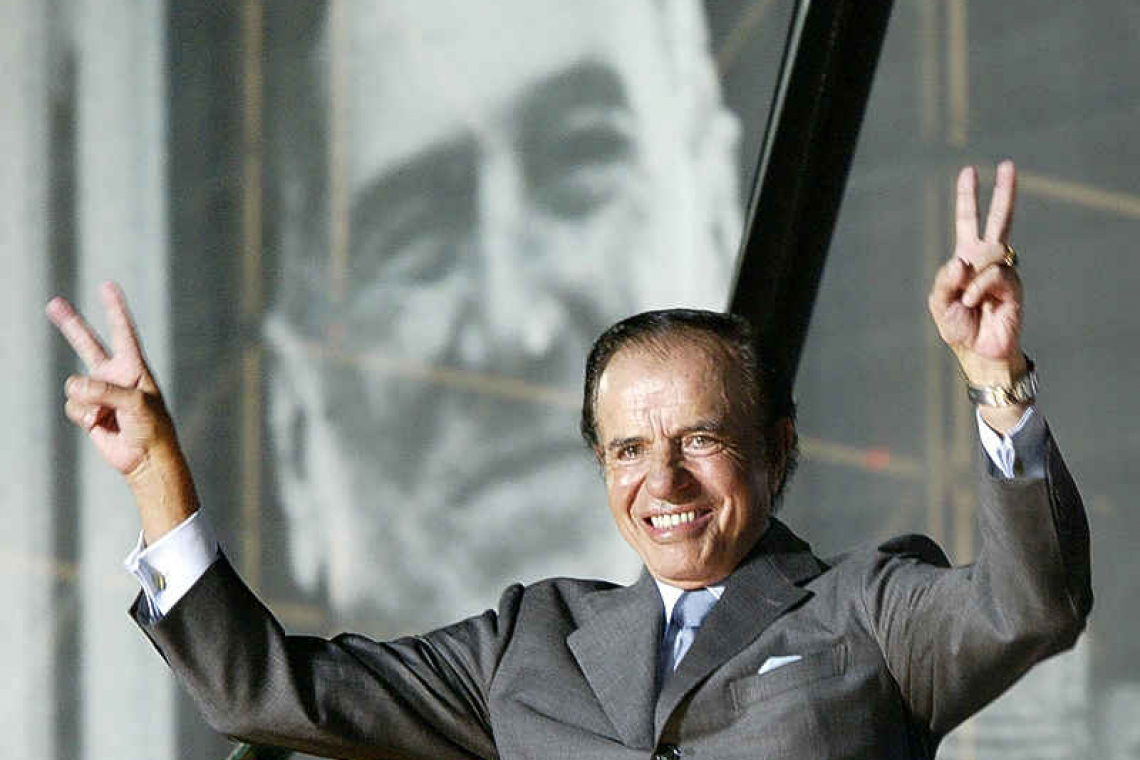 BUENOS AIRES--Flamboyant Argentine ex-President Carlos Menem died on Sunday at age 90 after battling long-term health problems, the country's current President Alberto Fernandez announced in a tweet.
Menem led a tabloid personal life while he pushed Argentina to an economic boom, but his two-term 1989-1999 presidency crumbled under the weight of corruption scandals and he spent years plotting an unlikely comeback.

With his black mane of hair and bushy gray sideburns, Menem at his peak entertained the Rolling Stones at his residence and put Argentina on the international stage, sending troops to the Gulf War and Bosnia. "Above all, he leaves us with memories of a good person, whom I will remember with great affection," former President Mauricio Macri tweeted.
Menem died at 11:20 a.m. after several weeks in hospital for a urinary infection, heart problems and other health issues. His body will lie in state at the capitol building before being buried in an Islamic cemetery in provincial Buenos Aires.
Menem won re-election after he privatized creaky state enterprises in a massive transformation of Argentine institutions in the early 1990s and the economy flourished. But he left office under a cloud -- charged with corruption and conducting illegal arms deals in 1991 and 1995 with Croatia and Ecuador. Ten years later, he was cleared of the arms smuggling charges, but Menem could never shake off the widely held suspicion that he had been involved in shady dealings even if he was never convicted.
The lawyer son of Syrian immigrants in La Rioja province, 750 miles (1,200 km) west of Buenos Aires, Menem became active in the Peronist party in the 1950s and 1960s and visited party founder Juan Peron in exile in Spain in 1964. He served as La Rioja's governor from 1973-1976.
After a 1976 military coup Menem was arrested and imprisoned for five years, a time he dedicated to planning his bid for the presidency. After his release he was re-elected governor two more times.
A charismatic speaker who favoured stylish silk and linen suits, Menem saw himself as the successor of his political mentor, Peron, who died in 1974 after returning from exile. While some Peronist leaders were trying to take the divided party down a sedate middle road, Menem revived the political boss, or caudillo, origins of the party, courting union leaders and rallying extreme factions from the left and the right to win the party's primaries in 1988.
Under Menem, Argentina finally emerged from the polarization of the 1976-1983 "Dirty War" dictatorship during which as many as 30,000 suspected dissidents were killed. He pardoned military chiefs and guerrilla leaders from both sides of the conflict.
He inherited an economy burdened by rampant inflation, and though he had run on a populist platform, he began selling off state companies and instituting free-market reforms that transformed the economy and drew praise from Washington and international lenders. He also adopted the controversial one-to-one peg of the peso currency to the dollar.
His policies were praised while the economy grew robustly in the early 1990s, but he was later blamed for high unemployment, corruption and overspending that ate away the benefits his market-economy politics may have brought.
A year after becoming president he had a acrimonious separation from his wife, Zulema Yoma, who was unhappy with his rock-star lifestyle and devotion to fast cars, golf and glamour. Menem kicked her out of the presidential residence in front of television cameras.
His daughter, Zulemita, remained close to him after the split, serving as his first lady, although they later clashed over his second wife, Chilean former Miss Universe Cecilia Bolocco, who was 35 years younger than him. That marriage ended in divorce in 2011, several years after he and Bolocco admitted they were separated. Chilean and Mexican media had published photos of her embracing another man.
Menem wanted to run for a third term but courts ruled he could not, and economic and political chaos descended on Argentina soon after he left power. His elected successor was toppled by street protests, and the next leader dropped Menem's currency peg as the country descended into a debt default and a deep 2001-2002 recession that drove millions into poverty.
Despite the arms dealing and corruption charges, most of which were eventually thrown out, Menem received the most votes in 2003's first round presidential elections. He withdrew from the second round when polls showed he would lose to Nestor Kirchner, a rival Peronist faction's candidate, in a landslide.
In self-imposed exile in Bolocco's luxury apartment in Santiago, Chile, Menem received union leaders and plotted his return to power. "With the last breath I take I will remain in politics," he told Reuters in a 2004 interview.
He eventually returned to Argentina when judges dropped arrest orders against him and he was elected to the Senate for his home province in 2005 where he remained until his death.
During his final years, he was investigated and charged over allegations he thwarted an investigation into the 1994 bombing of a Jewish community center, Argentina's deadliest terrorist attack. The case made international headlines in 2015 after a prosecutor investigating the case was mysteriously found dead.
In 2015, he failed to show up for a court date, though he responded to prosecutors' questions on the case in September 2016, mostly saying he did not know or did not remember the answers to their questions, Argentina's state-run news agency Telam reported.
Menem had shelved his plans to run for president again in 2007, and he looked frail in the years before his death when his appearances in the Senate became increasingly rare.