UPDATE 2: Theo gets five years for taking bribes and money-laundering 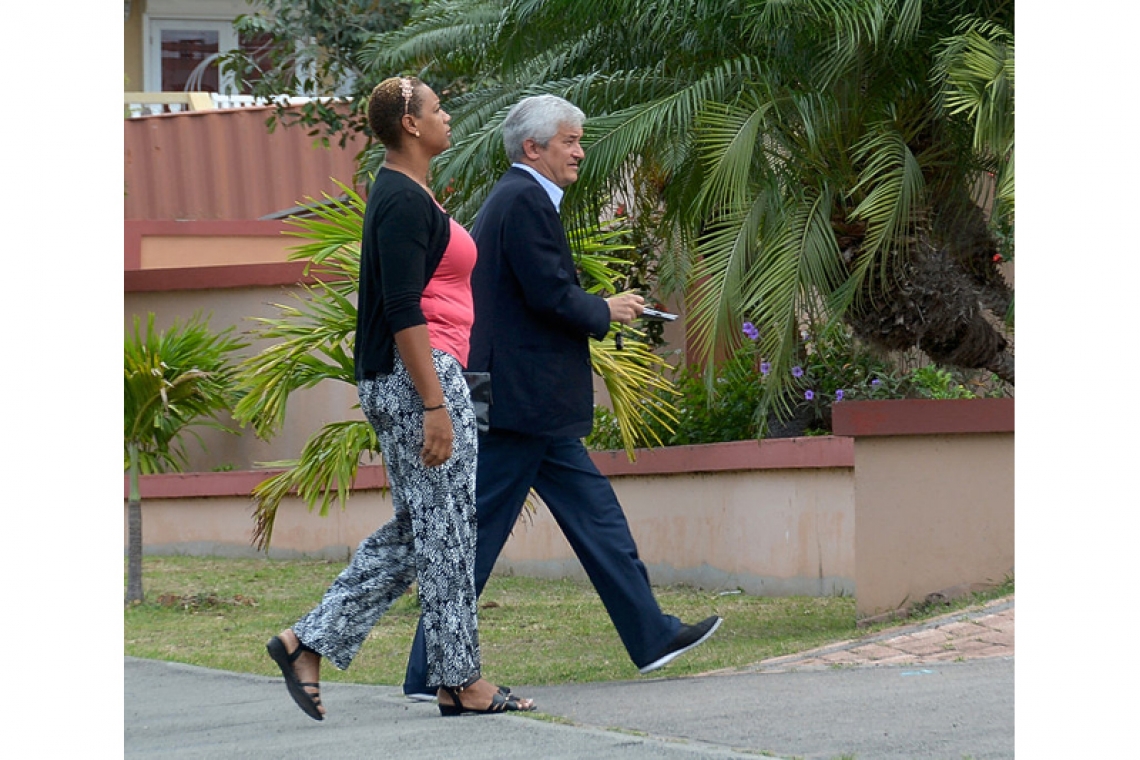 Former Member of Parliament (MP) Theo Heyliger (right) and his wife current MP Grisha Heyliger-Marten outside the Belair Community Centre during the start of the weeklong hearings in the “Larimar” investigation on March 9. (File photo)

Heyliger was also found guilty of laundering almost US $4 million at the taxpayer’s expense. He was sentenced to 60 months in prison, but will not be incarcerated immediately, as was requested by the prosecutor during the March 9-14 hearings in this case at the Belair Community Centre.

Maasdam was sentenced to 36 months, the judge stated via a video-conferencing link with the Courthouse in Curaçao. Boekaar received 12 months for paying bribes, money-laundering and forgery. Both were sentenced according to the prosecutor’s demands in their cases.

The judge held it against Boekaar that in joining the bribery scheme he had created unfair competition, an “inflation” in prices and had enriched himself. In weighing all aspects in his case, the judge saw no reason to deviate from the prosecutor’s demand.

Suspects George Pelgrim (67) and Ronald Elferink (58) were both found guilty of aiding Heyliger in laundering the proceeds of the sale of the so-called “Mullen property” and real estate in Oyster Pond. The Court held it against them that they had concealed that Heyliger was the factual owner of these properties.

The Prosecutor’s Office had demanded a prison sentence of six years and six months for Heyliger, who was one of the main suspects in the “Larimar” investigation concerning large-scale corruption in St. Maarten.

The Larimar case concerns payments of bribes in connection with several major construction projects, among them the causeway bridge, and the laundering of large amounts of money.

The Court found it proven that in his capacity of commissioner, minister and MP, Heyliger had accepted bribes from WWR and Central Concrete Mix of almost US $1.6 million and a so-called “credit line” of NAf. 450,000 on behalf of Caribbean International Maritime Co. NV, St. Maarten Shipping and Stevedoring NV and Nichirei Carib Co. NV, and a Dodge Charger with an estimated value of $200,000.

He was also convicted of having concealed the proceeds of the sale of real estate – the Mullen property and two plots of land in Oyster Pond – between September 9, 2011, and February 12, 2019.

Heyliger was acquitted for lack of evidence of the charge that he was bribed with work on his home for a combined value of  NAf. 135,000.

He received an 18-month reduction on his prison sentence, because the Prosecutor’s Office had given incriminating statements in a press release of May 24, 2019, and an animated video about suspect Heyliger’s involvement in this corruption investigation, which was published during the trial hearings in March 2020.

In sentencing, the Court also took into consideration that Heyliger had spent too much time in the police cells during his pre-trial detention and had illegally been transferred to Bonaire.

The former MP was arrested on February 19, 2019. His preliminary detention was suspended for medical reasons on May 21, 2019.

The evidence in this case was primarily based on the statements made by crown witness Maasdam. In an agreement between the Prosecutor’s Office and Maasdam sanctioned by a Judge of Instruction on March 4, 2019, it was agreed that Maasdam would give statements in the Larimar and “Frozen” investigations, in exchange for a three-year reduction of a six-year prison term.

The Court considered the agreements made by the Prosecutor’s Office and Maasdam “understandable and fair,” and unlike Heyliger’s lawyer Eldon “Peppie” Sulvaran, did not consider these a “disguised financial reward” for making statements.

According to the settlement agreement, the unlawfully obtained benefit in this case was estimated at more than 2.2 million euros, whereby it was agreed that Maasdam should pay half of the amount. This payment will be set off against the proceeds of assets seized under precautionary measures in the amount of 1.8 million euros.

Despite lawyer Sulvaran’s objections against the crown witness, which in his opinion should have led to the inadmissibility of the prosecutor’s case against Heyliger, the Court allowed the use of a crown witness, because Larimar concerned a case of large-scale bribery by international companies of “one of the most prominent and well-known politicians in St. Maarten with a large network, someone to whom many St. Maarteners have attributed almost unlimited power and influence in all-important [infrastructural – Ed.] projects on the island for many years, both before and behind the scenes,” the judge said.

The Court also considered that in a small community such as in St. Maarten few people involved in this scheme would be prepared to give statements about the alleged corruption of such an influential person, because the repercussion on these people’s personal and business lives could be major.

Because of Maasdam’s role in the awarding of government contracts and through his contacts with Heyliger, he was one of the few people who had information “par excellence,” whereas hard evidence such as a paper trail concerning cash payments to Heyliger would have been difficult to find, the judge reasoned.

The Court of First Instance found it proven that Heyliger had taken bribes from several companies in exchange for government procurement and to canvas his relationships with these companies. “The bribes made projects unnecessarily expensive. This money had to be raised by the taxpayer,” the Court stated in a press release.

All five suspects have shamed the confidence of the citizens of St. Maarten with their actions, the judge said. “This is extra harmful for a young country like St. Maarten, where leaders are needed who lead by example. The actions of the suspects also have an undermining and disruptive influence on society as a whole.”

In a separate procedure, the Prosecutor’s Office will file a dispossession claim against Heyliger to seize his illegal profits.

Heyliger was first elected in the Island Council in 1995. In the same year he also met Maasdam for the first time.

“As a parliamentarian or minister you are involved in many projects. … I try to come up with solutions if there are problems. I did the same for WWR. I know Boekaar. I mediated between Boekaar and the port. That is important on a small island, otherwise you have no more business. I am a mediator and bring the parties together,” Heyliger said about his role as a “mediator” between government and the construction sector during the Court hearing of March 10.

One day earlier, Maasdam had told the Court that from the late 1990s he had closed deals with big companies such as Devcon, WWR and Volker Stevin Caribbean, for which he received a fee from these companies, which he shared with third parties. The pay he received from the big corporations partly disappeared into the pockets of young political leaders.

“I had to share my reward with them. That became the standard here in St. Maarten. I structurally paid money that I received from the companies to the politicians, to bring in projects for the companies or to smooth out and prevent problems. Two commissioners who had a major influence on the decision-making within these companies were Roy Marlin and Theo Heyliger,” Maasdam had stated.

He said that Boekaar had joined the corruption scheme and the payment of bribes after he was appointed WWR’s director in 2004/2005. “Boekaar knew from the beginning that I shared my rewards with Heyliger. I accepted Heyliger’s financial demands because there is only one boss, and I was not. If I would not pay him, WWR, Devcon and Volker would not have obtained any contract, and, therefore, no work on the island.”

Maasdam had a consultancy agreement with WWR between January 1, 2004, and the end of 2011. All this time he received a three-per-cent commission for every awarded project or contract. The payments were made to his offshore companies Caribbean Advice and Consultancy (CAC) and Advanced Consultech (AC), which were established in the Isle of Man and Panama, “for tax reasons.”

In this period, Maasdam said he had received approximately $1.8 million from Windward Roads, of which he paid between $800,000 and $1 million to Heyliger.

“The agreement between us was that he got 50 per cent of the amount I received from the big companies. That was later adjusted in his favour to one third for me and two thirds for him. So, Theo wanted two per cent of the total amount and one per cent was for me. It only concerned projects and contracts in excess of $1 million.”

According to Maasdam, he had “given” many projects to WWR. “These were all different things they did for the government. I was involved with all these projects and received payment from WWR. Thanks to my collaboration with Heyliger, who was responsible for those policy areas at the time, I was also able to fulfil my role as an ‘oil man.’ The amounts had to be paid to obtain the contracts.”

He told the Court that he always paid Heyliger in cash during their weekly encounters. “We also saw each other in Boekaar’s office. I then received Heyliger’s car keys and I put a newspaper with an envelope with the money in it in his car,” Maasdam explained.

Between 2007 and 2010, Heyliger was a commissioner with responsibility for tourism and economic affairs, the port, infrastructure and public works. From October 10, 2010 until May 21, 2012, he was Vice-Prime Minister and Minister of Public Housing, Spatial Planning, Environment and Infrastructure VROMI. After the then-cabinet fell, he did not fulfil a public function until October 2013, after which he became a Member of Parliament. He did not run in the election of January 2020.

Heyliger has denied all allegations. 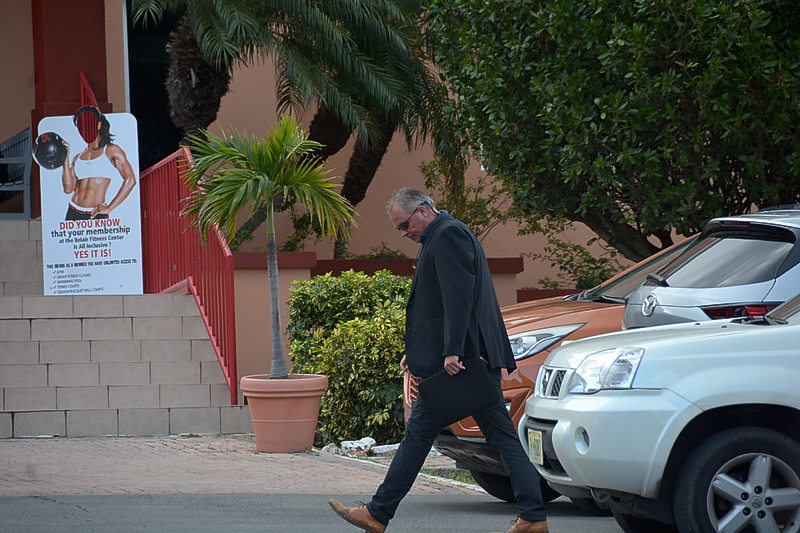