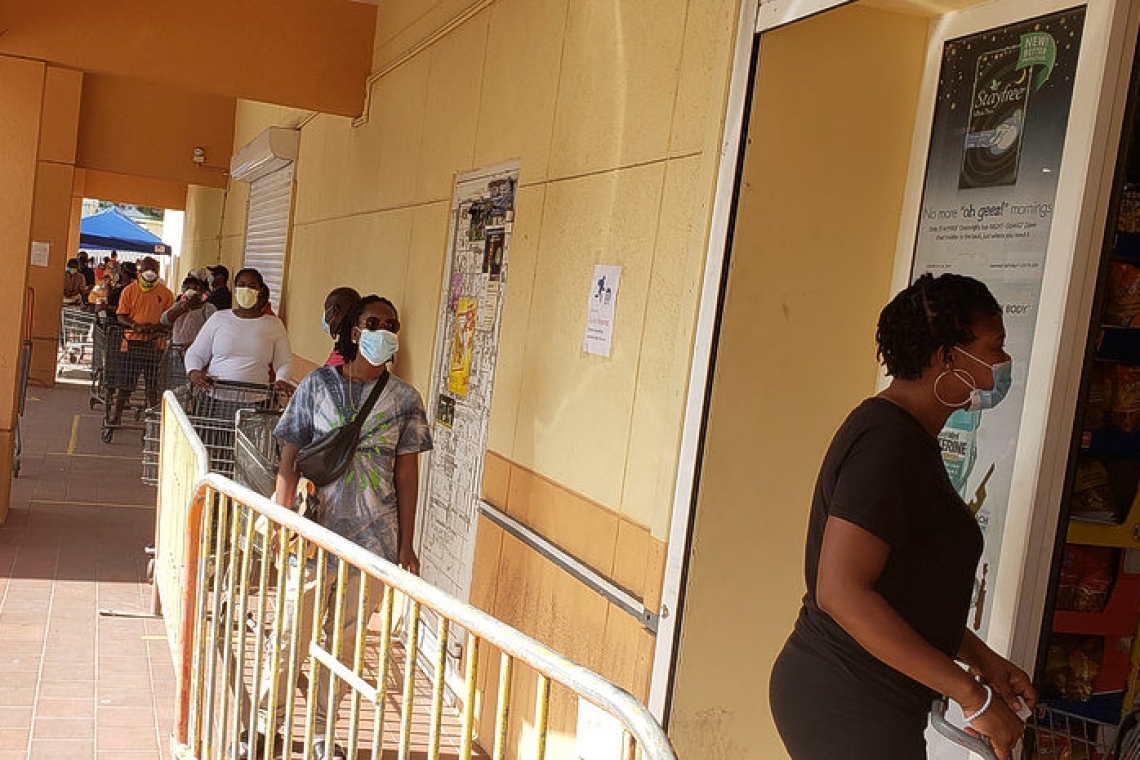 A streamlined system outside Sunny Foods on Thursday.

PHILIPSBURG--Many supermarkets around the country were faced with crowds of anxious shoppers early Thursday, some of whom began queuing up from as early as 7:00am to be amongst the first in line to get their groceries.

The scene was chaotic outside some supermarkets as the crowd of shoppers grew in size as persons flocked to get much-needed items, with some ignoring social-distancing guidelines. However, many supermarkets got the situation under control quickly by streamlining their queues.

Cost Pro in Madame Estate was one of the supermarkets that saw a large early crowd. Cost Pro representative Peter Gittens said the establishment had expected the rush, as many persons had been unable to get out of their homes to shop in more than a week.

He said customers had begun queueing up from as early as 7:00am. The situation was brought under control within an hour and a half after Cost Pro implemented a numbering system and set up a public-address system with loudspeakers around the supermarket building. The intention was for each customer to collect a number based on the time they arrived and they were able to sit in their vehicles or across the street and wait for their number to be called.

Only 20 persons, in addition to Cost Pro staff, were allowed in the establishment at a time.

The system seemed to have worked, as later in the day while there were persons waiting, many were sitting in the comfort of their vehicles for their turn to shop.

All shoppers had to sanitise their hands on entry and Gittens said carts were sanitised after each shopper. He said the establishment will be transforming the aisles of the supermarket into one-way lanes as of today, Friday, so that persons can be in and out even faster.

At many of the supermarkets visited by this newspaper in the afternoon hours, the crowds had subsided. Most shoppers wore masks, few of which were homemade, and some also wore gloves. Many supermarket attendants and bag-packers were also masked. Most supermarkets did not allow customers without masks to enter their establishments and some smaller supermarkets collected customers’ orders at the entrance and brought the grocery items to them.

Many of the larger supermarkets also had hand sanitising stations at their entrances while others had persons physically sanitising the hands of each customer who entered. Sunny Foods also had a numbering system in place.

During her national address on Thursday evening, Prime Minister and Emergency Operations Center (EOC) Chairperson Silveria Jacobs commended shoppers for making their safety a priority while shopping. She said there had been quite a rush at supermarkets early in the day, but this had subsided. She said the measures to reopen supermarkets for persons to get essential items seemed to have been yielding some positive results.

She made clear that the lockdown is still in effect, as persons are only being afforded the opportunity to shop and visit banks to sustain themselves. Government does not want anyone to go hungry, she said. “This is why leniency is being allowed.”

Jacobs said she has seen reports coming out of Dutch Quarter where the community was being compliant and persons had been working hand-in-hand with shopkeepers while sanitisation was taking place at the entrances of supermarkets and queues outside of grocery stores had taken into consideration proper social distancing and shoppers had been wearing face covers to protect themselves.

Other measures will be taken in the national decree to extend the state of emergency and lockdown to ensure the safety of the population, she said.