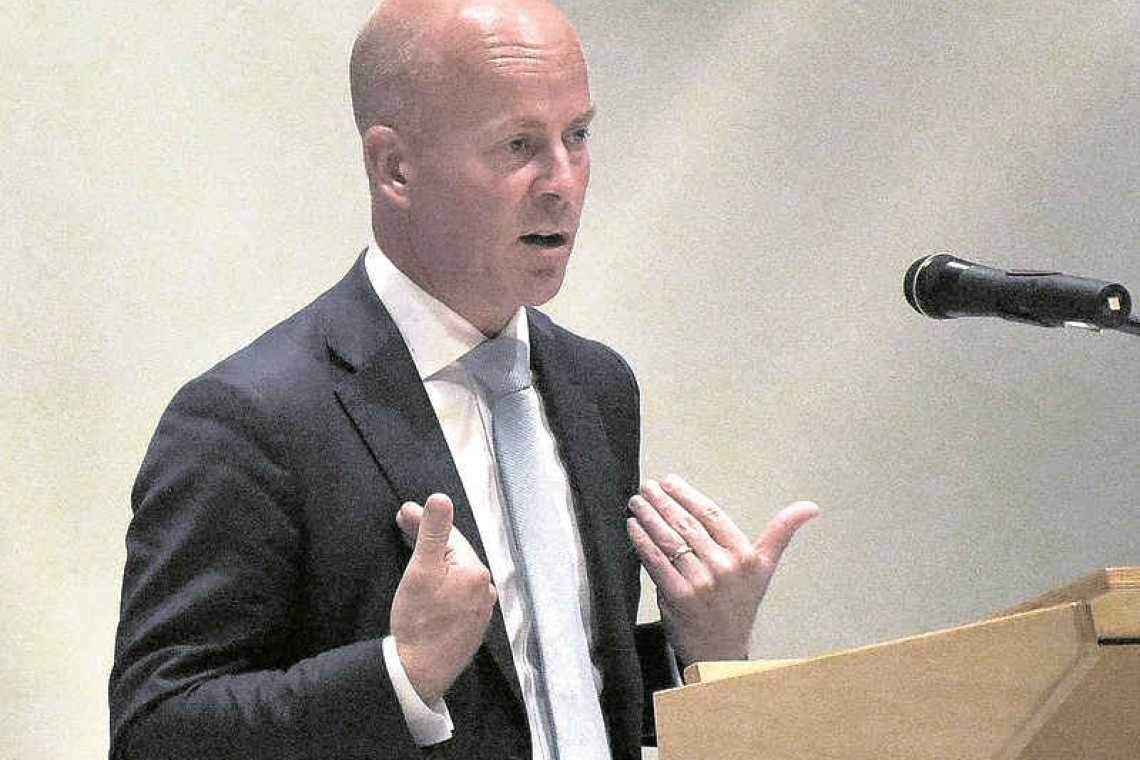 THE HAGUE--“As country within our kingdom, St. Maarten deserves the benefit of the doubt.” This assurance came from Dutch State Secretary of Home Affairs and Kingdom Relations Raymond Knops in his reply to concerns by the Dutch Parliament about the vulnerability of the agreement between St. Maarten and the Netherlands.

The Christian Democratic Party CDA had asked the state secretary a month ago about the St. Maarten Parliament’s backing of the December 22, 2020, political accord with regard to the liquidity support and the associated reforms, and establishing of the Caribbean Reform and Development Entity COHO.

The CDA party wanted to know if Knops shared the concern that the support was “very fragile,” considering some statements that were made on the floor of Parliament. Knops replied on Thursday that the cooperation trajectory could only be successful if both countries totally committed to this.

“Sufficient political support, not only in the government, but also in the Parliament, is crucial in this. This not only counts for the Kingdom Consensus Law, but also implementation of the reforms stated in the country package,” stated Knops.

“Considering the expressions and choice of words of several Members of Parliament (MPs), I understand the concern that the support of these members is vulnerable. Still, this should not distract from the fact that a very broad majority of the MPs have expressed explicit support for an accord and that this support was confirmed in writing by the chairman of Parliament.”

In this regard, St. Maarten as a country within the kingdom, deserves the benefit of the doubt, said Knops, who promised that the Dutch government would do its utmost to accomplish the necessary reforms together with St. Maarten, as long as the latter stuck to the agreements.

Part of the agreement is the establishing of the kingdom law on COHO. “In case the required consensus for this proves to be insufficient, or is removed from the proposal, the country package will legally cease to exist,” stated Knops, in other words, no consensus on the full implementation, no liquidity support.

Different parties represented in the Second Chamber’s Permanent Committee for Kingdom Relations had also asked about the connection between the COHO and the reconstruction programme financed by the Netherlands through the Trust Fund, and managed by World Bank.

The state secretary said he “saw no reason” to prematurely stop the World Bank trajectory and transfer the projects to the COHO. He explained that at the time of the establishing of the Trust Fund after the September 2017 Hurricane Irma, the World Bank was asked to execute this trajectory, mainly due to their expertise in this area, and their know-how about small island states.

According to the state secretary, the most important connection between the reconstruction and the COHO trajectories is the promoting of good governance as a precondition for successful implementation.

“The reforms that were agreed upon in the country package are complementary to the reconstruction projects, which are being carried out under the Trust Fund. Even though the trajectories will remain separate, they will have to reinforce each other,” stated Knops, who mentioned the airport as an example.

The airport terminal will be restored via the Trust Fund, while in the country package it is stated that necessary improvements will be made to the corporate governance of the airport and other government entities. “In light of Building Back Better, investing in bricks for the airport will not be sufficient. Also, the manner in which the airport is managed and the associated checks and balances need to be enhanced.”

Improving the airport’s corporate governance was already started as it was a condition for funding to rebuild the airport terminal. “The St. Maarten Task Force Corporate Governance was established, but the plans for this entity were barely implemented by the local government. In the country package it has been agreed that St. Maarten will now actively implement these plans.”