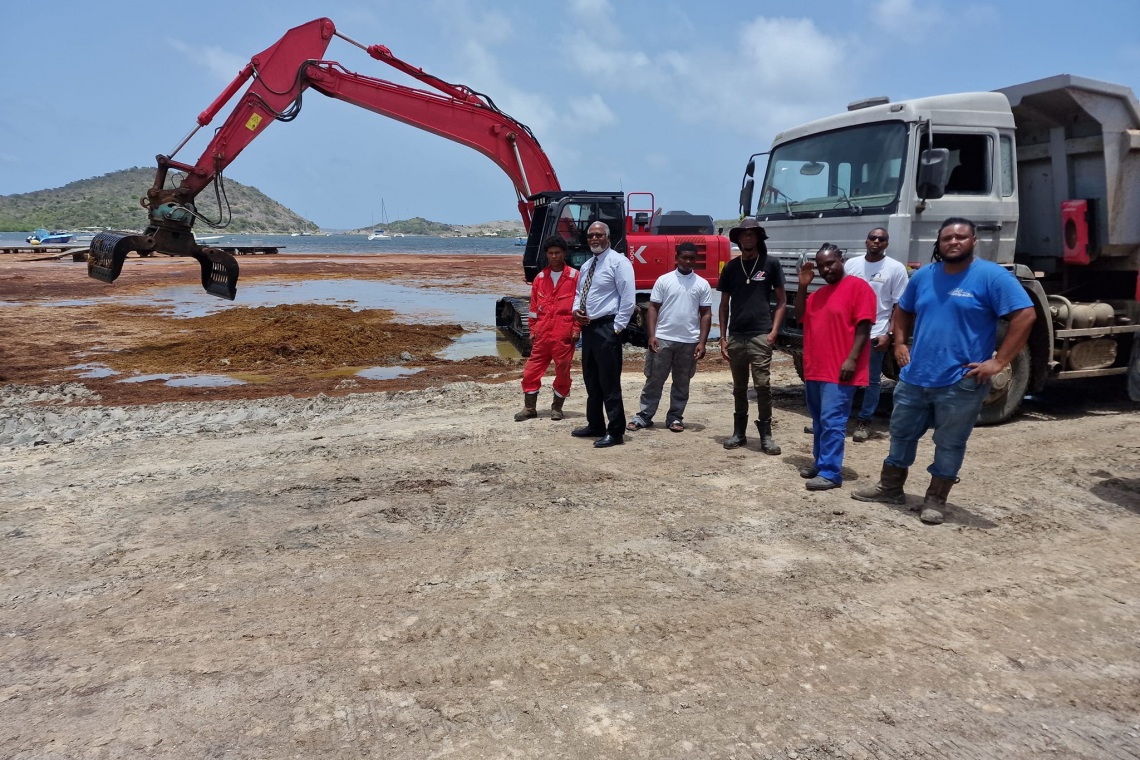 President of the Collectivité Louis Mussington poses with local contractors collecting Sargassum weed in Cul-de-Sac Bay and at other beaches on Monday. It was understood there has been good progress in the collection lately. (Collectivité Our News photo)

MARIGOT--After his trip to the French Caribbean, Minister Delegate for Overseas France Jean-François Carenco has noted the need for a robust response to the crisis related to the massive invasion of Sargassum seaweed in the islands.

At this stage, and despite the significant amounts decided by the Government for the “Sargasso II plan” – more than 36 million euros over four years – some territories are experiencing difficulties in organising and implementing the collection on their coastline.

A special steering committee met in Paris on August 1 to accelerate actions following initial feedback from territories. The steering committee aims to facilitate communities’ action by mobilising all state services at their side.

In the immediate future, to solve the problem of rapid collection, an increase to 80% of the State’s co-financing will be granted until October 15. The remaining 20% will be borne by the local communities during this period. In addition, the State may, on a case-by-case basis, mobilise a start-up fund so that part of the grant can be paid in advance.

Since 2018 the State, communities and administrations, at the initiative of the President of the Republic, have put in place ambitious means to respond to the management of this phenomenon in the medium and long term. The “Sargasso II” plan, adopted in 2022, is the new operational variation.

To gain efficiency and better structure the crisis response, Carenco and Minister of the Interior and Overseas France Gérald Darmanin have decided to use a new method with the establishment, in the four territories concerned, of a single operator which centralises the needs, resources, measures and responsibilities.

This operator will have to be created by the end of October 2022 at the latest. It will allow an increase in the operational response, more flexibility for a deployment of forces more adapted to the reality in the field.

In addition, the other health, environmental, research and innovation measures provided for in the Sargasso II plan are continuing. Local steering committees are now meeting every 15 days to ensure effective implementation of the plan’s measures in all affected territories.