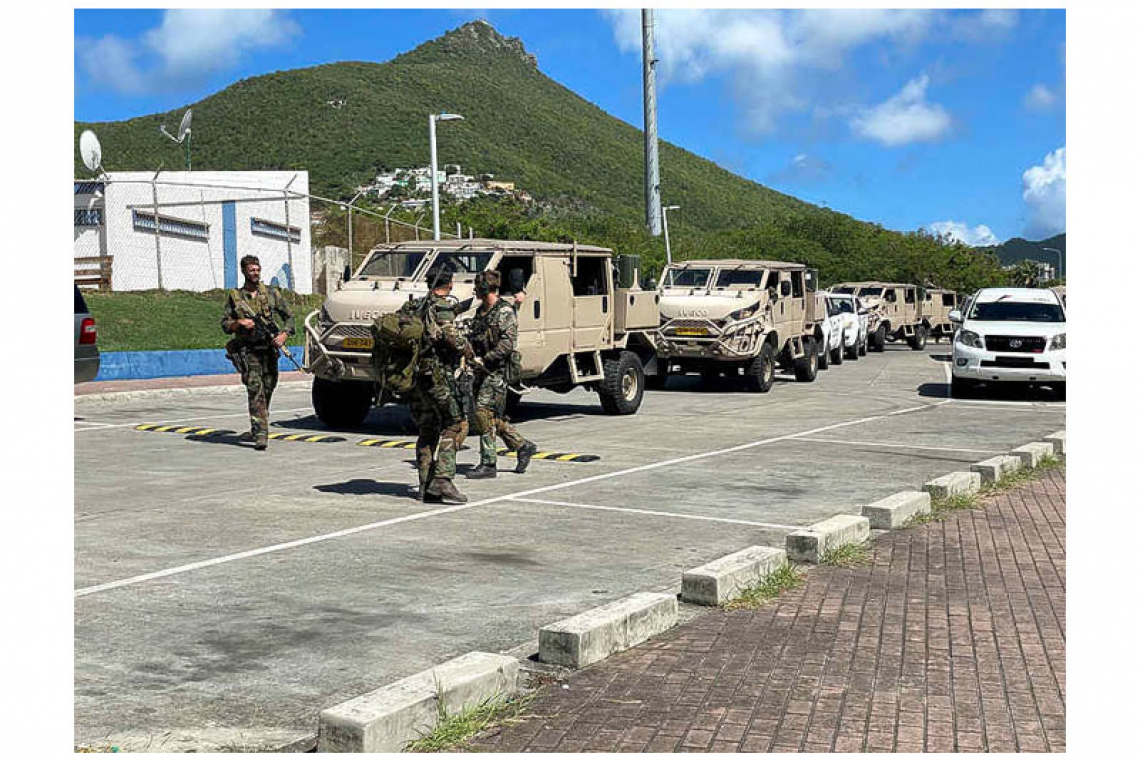 The “stand-in” governor was taken by members of the Marine Squadron Carib in a column of armoured vehicles to Raoul Illidge Sports Complex during a rescue exercise on Tuesday morning.

PHILIPSBURG--After he was taken by members of the Marine Squadron Carib in a column of armoured vehicles to Raoul Illidge Sports Complex, the “Governor of St. Maarten” was guarded by heavily armed soldiers awaiting a helicopter for evacuation.  But the rescue operation went differently than planned on Tuesday morning.

The blockade of Welgelegen Road in front of the sports stadium at 10:00am did not prevent the “enemy troops” on quads from getting to the entrance of the stadium. There it came to a confrontation with the defenders of “the Governor of St. Maarten” played by an actor. The stand-in was brought to safety by the soldiers under the stadium benches. But the rescue helicopter took too long. Meanwhile, the “enemy” penetrated the stadium. 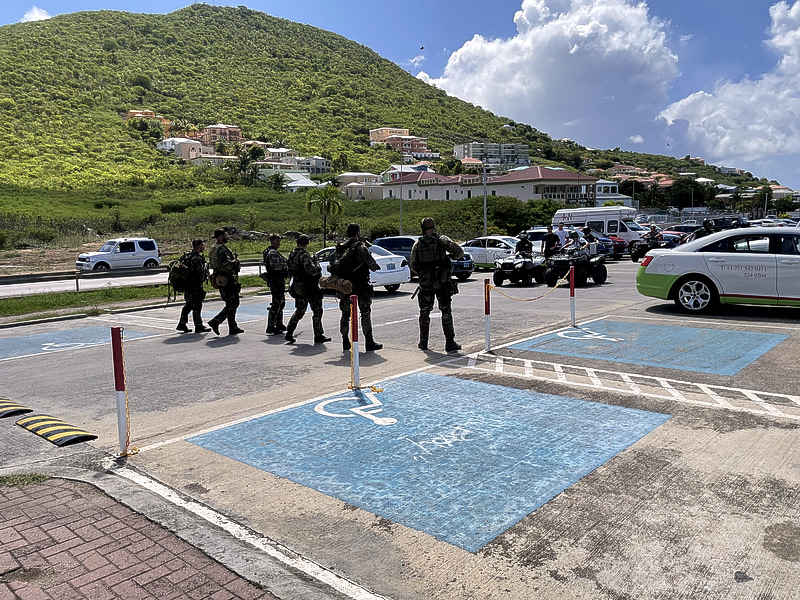 The inventors of this rescue exercise, part of operation Windward Express 2021, had misled the men, and the military had to change their strategy on the ground to save the “governor”.

“They have tackled this tactically,” said Lieutenant Dion Bremmer on behalf of the Commander of the Navy in the Caribbean. “The exercise has been successful.”

The “governor” was led out of the stadium, under cover, to the armoured vehicles, and then taken to Mullet Bay where a rescue team waited to take him to the station ship Pelican. “The Governor arrived safely on the ship. Mission accomplished,” said Bremmer.

The rescue operation is one of many strategic exercises for marines of Marine Squadron Carib troop this month, along with FRISC, Marine Detachment St. Maarten and crew of the station ship Zr. Ms. Pelican from Curaçao. The island of St. Maarten has been chosen, said Bremmer, “considering the hurricane season” and the “necessity of our presence if the island were to be ravaged by a hurricane.”

The Ministry of Defence in the Caribbean has been working on hurricane preparation for many months, said Bremmer.

“These exercises do not necessarily have to take place in St. Maarten. How to protect properties from looting, that you can also practise elsewhere. Just like rescue of wounded, first aid, and practising with weapons and all-terrain vehicles. But the fact that there are now over 100 marines and soldiers in St. Maarten, almost half of the hurricane team of the Ministry of Defence, means that we could have switched quickly if Hurricane Sam had come close to the island.”

The troops have closely followed the developments around Hurricane Sam, Bremmer said. “Recently, simulation exercises were conducted with the disaster staff and other security partners for maintaining public order during crisis situations as well as providing support during a hurricane passage.”

Several participants in Operation Windward Express 2021 provided assistance in St. Maarten after Hurricane Irma in September 2017. “They have seen the chaos with their own eyes at the time, and know their way around here,” said Bremmer. Also important, the permanent Marine Detachment in St. Maarten has contacts with the government and works closely with the authorities. “Fast and robust action during humanitarian assistance operations is only possible if you practise well with the local authorities.”