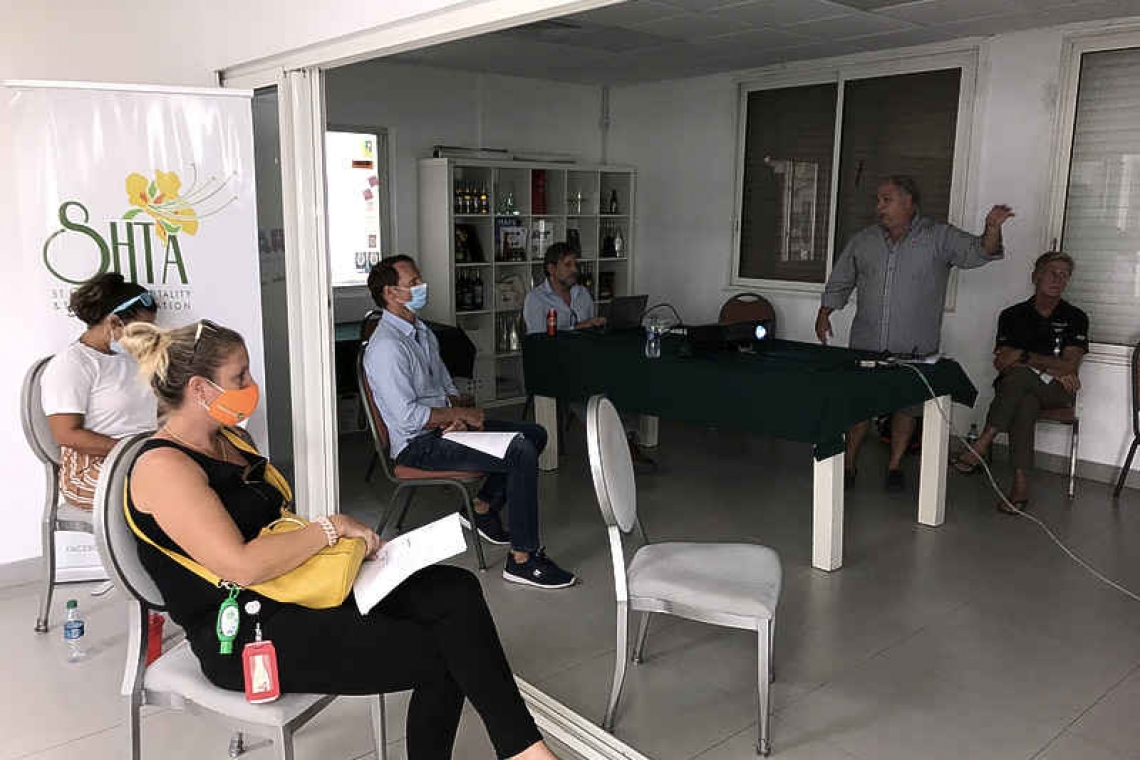 PHILIPSBURG--Despite the COVID-19 pandemic, St. Maarten Hospitality and Trade Association’s (SHTA’s) latest tourism survey conducted in June shows St. Maarten has lost none of its appeal, with 81 per cent of respondents keen to return to the island while they are largely not put off by COVID-19 requirements before and during travel and at the destination.

Close to 10,000 respondents completed the survey following the dissemination of 100,000 emails by Port St. Maarten, Domino’s Pizza, and Sonesta Maho Beach Resort and Casino to their client databases, among others, via social media outlets. The biggest group that responded to the survey was the 55-73 age group (49 per cent).

A workshop review of the survey results was held at the SHTA offices on Wednesday with several representatives of companies participating via a Zoom group chat. Eighteen persons participated, including SHTA board members. SHTA board member Ricardo Perez talked attendees through the survey questions and results.

Cleanliness and sanitation (52 per cent) and no COVID-19 or few cases (51 per cent) were the top considerations among respondents when planning to visit St. Maarten. No cancellation fees/charges from airlines and resorts, and pricing, were important to 40 per cent of respondents while 38 per cent considered free masks, wipes and sanitiser in rooms as important considerations.

“These are major indicators of what people are looking for on returning and this is how we should be marketing,” said Perez. “We have the answers right here.” He said some resorts on the Dutch side have already produced videos on the sanitation aspect.

Responses were steady through all age categories, but there was more resistance to wearing masks except in the 74-plus age category where 46 per cent said they were willing to wear masks.

The fact that 81.26 per cent of respondents indicated they wanted to return, Perez said, was “marketing gold.” “We have an audience that likes what we have to offer, likes the island, and now we have to bring them back, and give them what they are looking for,” he added.

Some 43 per cent of responders to the “not sure” question said they had no immediate plans to return while 12.60 per cent said their experience could have been better.

Asked when they would anticipate returning to St. Maarten, 44.40 per cent said “sometime in 2021” an indication most wanted to wait for the high season. Around eight per cent of respondents wanted to return between July and November and 10 per cent wanted to return straightaway.

“Summer we know is the slowest time before it ramps up in November and December, but unfortunately this ramp-up is going to be a lot slower going into the high season,” Perez reasoned.

The top reasons for visiting St. Maarten among respondents were duty-free shopping, casinos, a home away from home, and restaurants. The answers were consistent through all age categories. As far as activities were concerned, going to the beach (79 per cent) was the most popular, followed by shopping (30 per cent) and nautical activities. The answers were steady throughout the age groups.

“What are we doing to keep beaches clean and maintained for tourists? That should be a high priority,” Perez questioned.

For dining options, 52.87 per cent of respondents said they would go out to cafes and restaurants, 39.70 per cent preferred to dine on the premises and 36 per cent said they would do a combination of eating in and going out.

Resort hotels were the preferred choice for 29.76 per cent of respondents, all-inclusive 22.80 per cent, timeshare 21.14 percent and Airbnb 12.10 per cent. Airbnb held steady throughout the age categories. There is a trend for younger people to go for all-inclusive and less timeshare while older people in the 74-plus age preferred timeshare (43.9 per cent).

“Airbnb was considered the choice for younger people because it is less expensive, but we see it is being used more by the older generation,” SHTA Executive Director Wyb Meijer noted.

Added Perez: “Until now we have not had a feel of how big our Airbnb market is. Potentially 12.10 per cent of our accommodation market may not be paying an occupancy tax to generate revenue and that could be a missed opportunity for government. And with COVID-19 protocols in place how are we going to ensure those Airbnb accommodations are also complying?”

Rental cars, scooters, etc. are still the preferred choice for transportation among visitors (55.27 per cent). Perez said this could also be looked on as a reflection on lack of government policy on public transportation.

Figures showed that the popular myth that all-inclusive guests do not dine out and that timeshare people do all their cooking in their unit were both untrue.