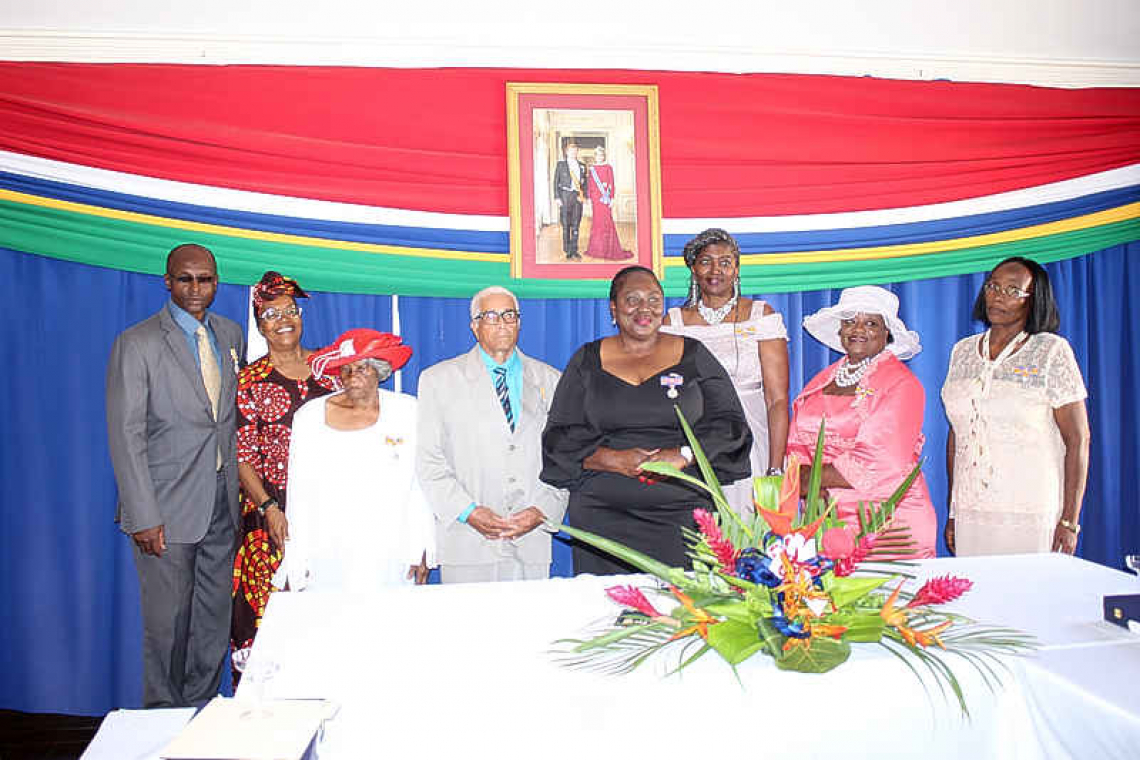 ST. EUSTATIUS--Seven residents of St. Eustatius received royal decorations on Monday, April 26, on behalf of His Majesty King Willem-Alexander of the Netherlands. 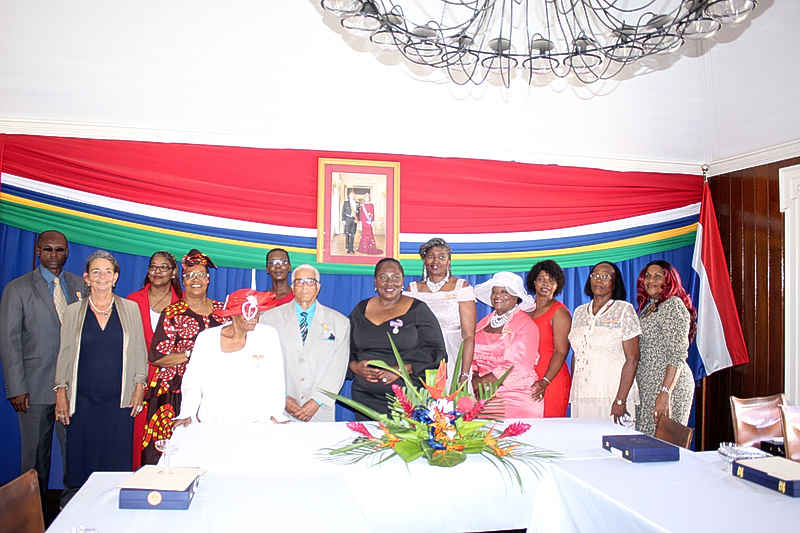 “These persons have not only dedicated time and effort in pursuit of providing a better quality of life for themselves and others, but have also excelled in their lasting contributions to Statia,” said Acting Government Commissioner Alida Francis during the royal decorations ceremony held in V.A. Lopes Legislative Hall (Government Guesthouse).

Woodley, or “Nurse Woodley” as she is affectionately known, was nominated for this decoration due to her altruistic nature. She gives of herself to whomever needs her help, be it a child, a colleague, or those who are considered less fortunate in the community. Woodley is a nurse, social worker and civil servant and is willing to help the community in whatever way is needed. She is dedicated to her church, youth on the island, and her volunteer work with the many charitable foundations in Statia.

Spanner was honoured for her hard work, integrity, and dedication to the people of Statia, and her 33-year political career. Her charitable work is known far and wide as well as her willingness to help the community of Statia. She has served her island in various capacities, including public administrative management. In this capacity specifically, she has always striven to bring about a positive and productive change in St. Eustatius’ socio-economic environment.

Marsdin earned her moniker “Lady of Culture” because of the spearhead role she plays in the upliftment of Statian culture. Everything she does is infused with her dedication and effort to keep Statia’s culture alive. Marsdin’s commitment to the Statia’s culture can be traced for decades. Even after retirement Marsdin continues to protect and promote Statia’s culture far and wide as well as her commendable dedication to the elderly of Statia. She dedicates her time to ensure the island’s elderly are remembered and celebrated.

Hook’s commitment to the island is demonstrated by her dedication to the youngest members of the community. Her 34 years of staunch support for the parents of the children on the island as a teacher and caregiver went above and beyond the call of duty. Known to all as “Teacher Theresa” or “Nana”, Hook is very much loved, respected and appreciated by the parents and children whom she takes care of daily. Many of the children she once raised hold prominent positions today in Statia and beyond.

Carty is a trailblazer in the field of agriculture. She was a female farmer in the world of Statia men. She believes in passing on the knowledge that “if you grow your own food, you won’t go hungry and this is the utmost importance.” Even as a pensioner, seeing the decline of agriculture and farming in Statia she took on the task of promoting the importance of backyard gardening. She was still tilling the soil well into her late 70s.

Merkman is known for his devotion to sports, charitable work, civil service and his church in Statia, as well as his willingness to impart his knowledge to the younger and the older generations on the island. His enthusiasm for the island’s well-being led him to venture into politics in 2007 to make a difference to ensure the future for generations to come.

Fortin, a retired carpenter by trade, has passed on his knowledge to many students over the decades. In his free time, he would help families construct, renovate or repair their homes. Fortin’s desire to help others also extended to making it possible that Statian farmers would be able to sell their products in Aruba.

Over the years and even to this day, despite health difficulties, Fortin still distributes free agricultural produce to families, friends and less fortunate in the community.  Fortin has also taken it upon himself to help with the construction of the tombs for burial of persons who are financially unable to do so.

Francis congratulated the recipients. “Much appreciation is extended to the representatives who have received and submitted the nominations and have facilitated and guided the nomination process for the royal decoration. On behalf of His Royal Highness, I say: ‘Thank you. Wear the symbol of this royal recognition with pride,’” said Francis during the event.

The Royal Decoration Committee says anyone can submit names of nominees for 2022, at any time. The committee requires at least three supporting letters for each candidate and an application form to be completed. When a candidate is brought forward, there must be at least one person who knows the nominee well and who is willing to take the responsibility to coordinate the gathering of all the information.

The members of the committee will then support and advise.

This email address is being protected from spambots. You need JavaScript enabled to view it. any citizen can submit names of individuals whom they believe should be considered for a royal decoration.