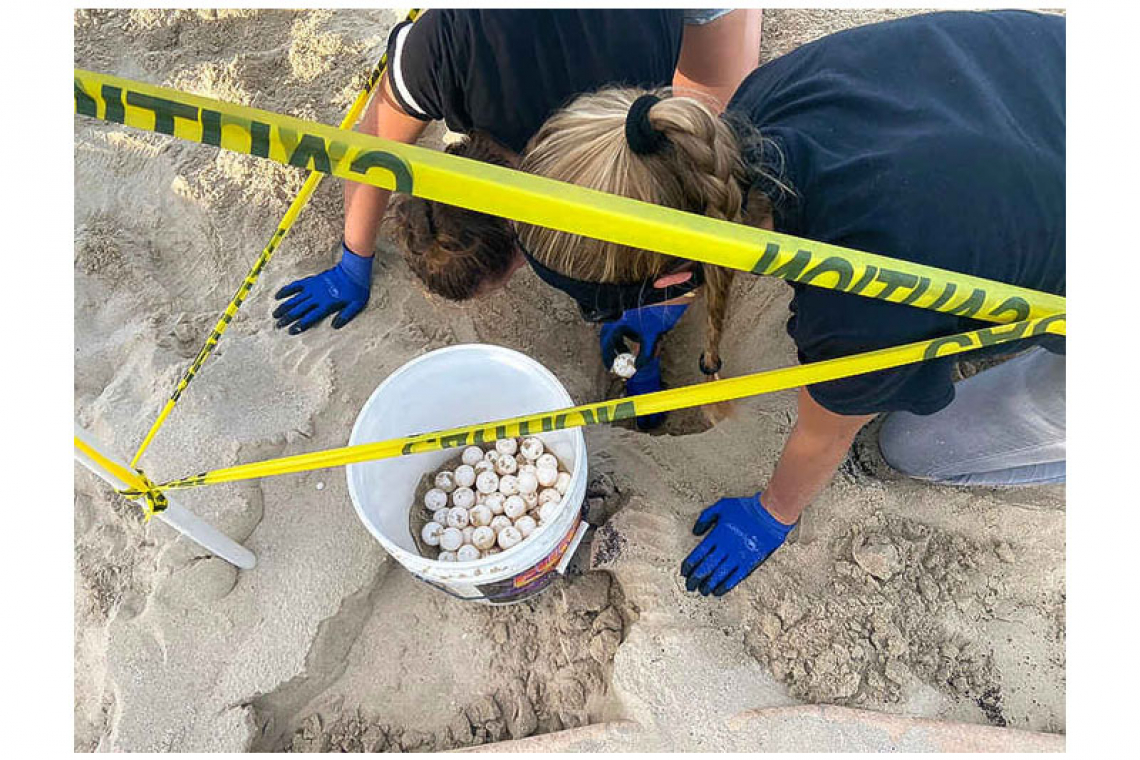 Nature Foundation relocated a sea turtle nest that was in danger of being damaged due to high wave activity on Dawn Beach.

PHILIPSBURG--Nature Foundation St. Maarten has noticed an increase of sea turtle nesting activity. Two nests hatched successfully on Dawn Beach and hatchlings made it to the ocean. Another three nests were laid successfully by hawksbill turtles.

On average only one per cent of hatched sea turtles make it to adulthood. “Therefore, it is crucial to not further hamper their survival and people should stay clear from any sea turtle nesting activity,” said Nature Foundation manager Melanie Meijer.

Unfortunately, human disturbances on the beach and weather conditions caused challenges for the sea turtles and nests to survive. Several hatchlings were disturbed due to artificial lightening around the beach, causing them to end up in a pool.

Locations where sea turtles have laid eggs were marked. 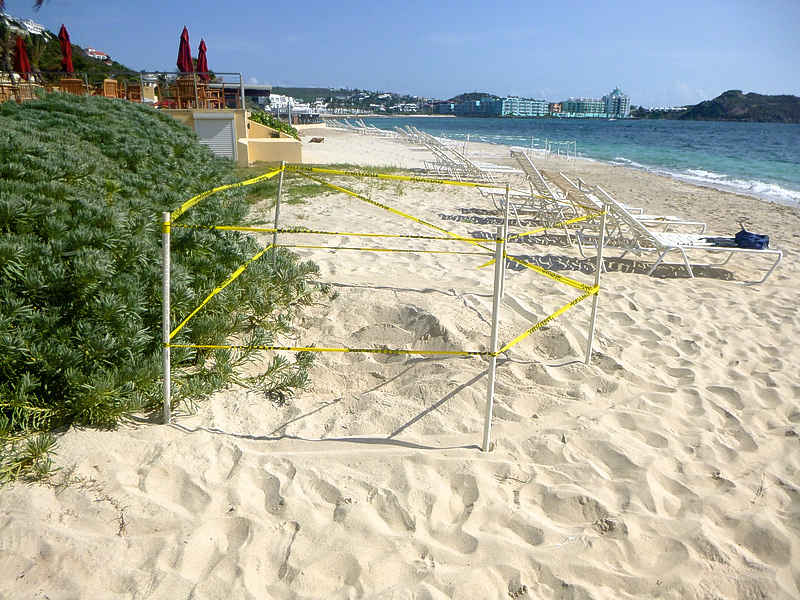 “Some did not survive, others were saved by the hotel staff and members of our team,” Meijer said. “One nest got destroyed due to the swells from hurricanes in the regions, causing the eggs to flush away.”

An increase in sea turtle patrols by Nature Foundation and the assistance of several hotels, including Westin Dawn Beach Resort and Spa, has led to early detection of nesting, Meijer said. “We were fortunate to welcome Tessa Volbeda as a member of our team. She studies Marine Biology at University van Hall Larenstein in the Netherlands. During her internship in St. Maarten she will research sea turtle nesting activities on the island.”

Human activities on the beach may damage sea turtle eggs that are buried closely under the surface. 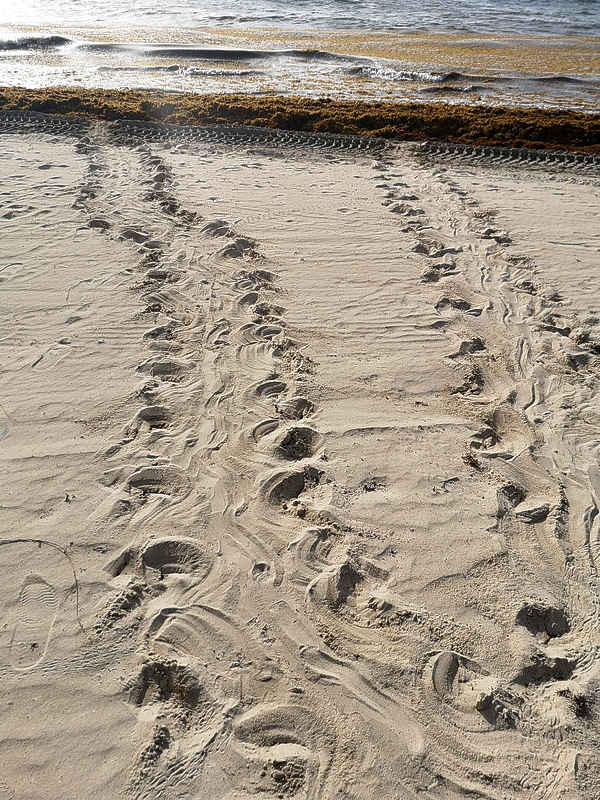 Three species of sea turtles – the green, hawksbill, and leatherback sea turtle – will lay their eggs on beaches around the island from March until at least December.

“It is an honour to be working with the Nature Foundation on this sea turtle project,” said Volbeda. “I have always had a fascination for sea turtles, and I am extremely excited to be experiencing such an active nesting season. I hope to contribute as much to the conservation of these animals as possible. They play an important role in the ecosystem.”

Due to climate change, sea turtles may be nesting earlier in the season to avoid higher-than-average temperatures. Individual sea turtles have been known to lay their eggs at different times outside the regular season. Unfortunately, the hatchling mortality rate is high, and it is not unusual for the hatchlings to become dehydrated and pass away before reaching the ocean.

“Hawksbills, one of three sea turtle species that nest on St. Maarten’s beaches, are critically endangered and protected locally and internationally,” said Volbeda.

The use of flashlights will disturb sea turtles, unless it is a red light. 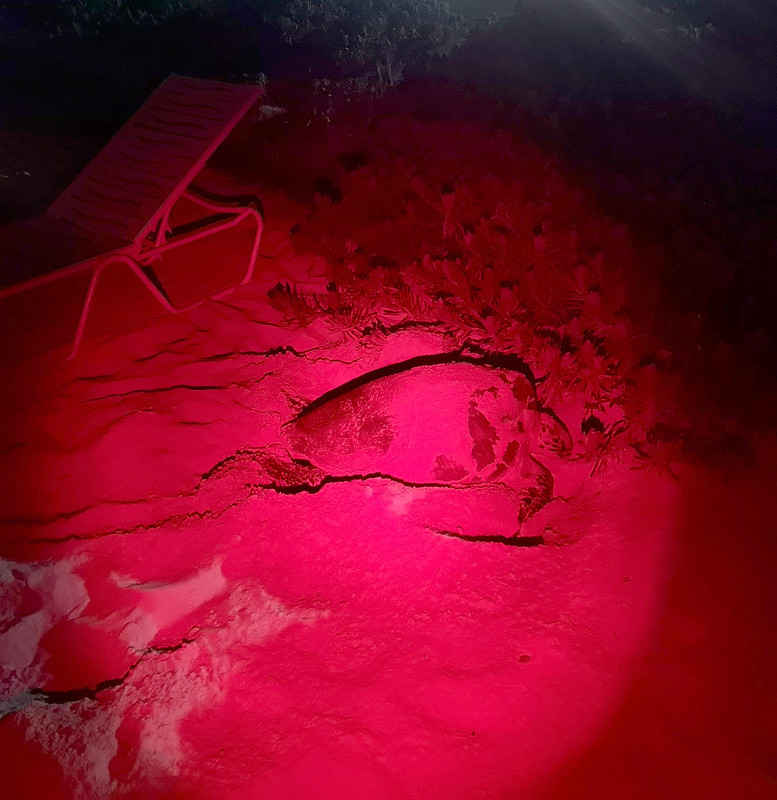 It is illegal to kill, wound, capture or pick up sea turtles. Nature Foundation warns that it is also illegal to disturb their environment. It is forbidden to damage or destroy sea turtle nests, lairs, breeding places or eggs.

Nature Foundation advised keeping a 30-metre distance from sea turtles on the beach. “Also please refrain from using flashlights, unless it is a red light.”

More data could be collected about the nesting sea turtles thanks to collaboration with the security team at Westin Dawn Beach Resort and Spa, Meijer said. “The Foundation was able to confirm three laid nests and two hatching events. The nests have been marked to ensure that these can remain undisturbed for the incubation time until the eggs hatch.”

Two hatchings took place at the end of August, one at Dawn Beach and one at Oyster Bay Beach.

“While many hatchlings seemed to have made it into the ocean, a few did not find their way,” Meijer said. “Several were found around the property of the Westin Hotel, which could be due to the strong lighting in the area. Hatchlings normally follow the light of the moon reflecting on the water to reach the ocean safely and strong outdoor lights can confuse them. Some were luckily found wandering early enough to be saved.”

Meijer advises: “If a nesting sea turtle, nesting tracks or hatchlings are encountered on the beach, always try to let sea turtles find their own way to the ocean and contact the Nature Foundation immediately.”

If the hatchlings are heading in the correct direction, it is best to not disturb them, she said. “If debris is in the way, please remove it, or carefully pick it up along with some sand and put it into a bucket until the foundation staff arrives.”

Meijer warns to never place hatchlings directly in the ocean. “Always place them in the sand just at the edge of breaking water,” she said. “Please count all hatchlings to report to the foundation. Ensure that pets and animals are kept away from the area and don’t walk over the tracks, as much data can still be retrieved from sea turtle tracks and nesting signs.”

Development near the beach reduced the beach’s width, forcing sea turtles to nest closer to the sea where their eggs could be washed away. Nature Foundation staff relocated a sea turtle nest that was in danger of being damaged due to high wave activity on Dawn Beach at the end of September.

“There was a high risk of the nest getting flooded,” Meijer said. “To prevent this, the nest was dug up and 126 eggs were carefully collected. This is a very risky process, as the eggs are very vulnerable in the first days after being laid. If eggs are not handled carefully, fragile membranes in the egg will break, which means the egg will not develop any further.”

If any sea turtle activity is observed on beaches, please contact the Nature Foundation to report the sighting at 544-4267 or