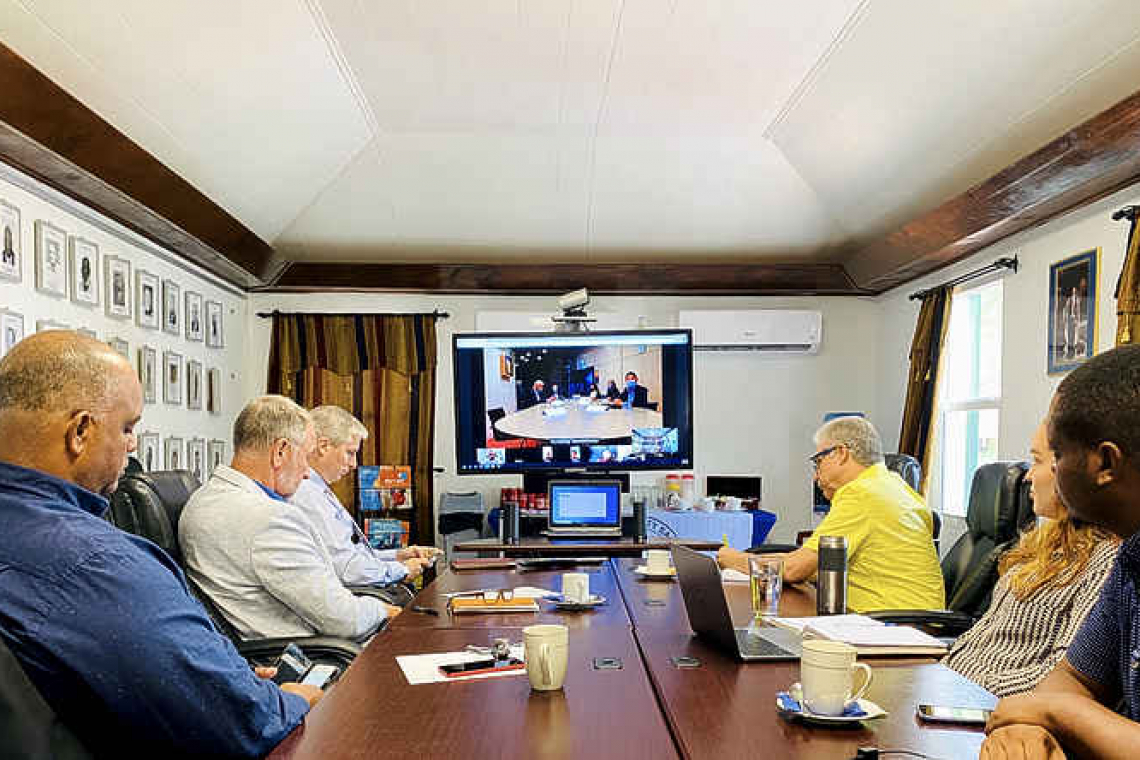 The Saba Island Council during the virtual meeting with members of the Dutch Second Chamber’s Permanent Committee for Kingdom Relations last Thursday.

SABA--The Island Council of Saba sent a letter to the Permanent Committee for Kingdom Relations of the Second Chamber of the Dutch Parliament on Monday, October 5, in which additional information was shared following last week’s virtual meeting of the Island Council with committee members to discuss developments surrounding COVID-19.

Saba indicated in the video conference last Thursday that the island was very grateful to the Dutch government for the various methods of financial assistance for residents and the local private sector. “This assistance surely contributes to softening the financial circumstances in which many residents and entrepreneurs currently find themselves.”

However, there are a few bottlenecks for which the Island Council sought attention in the letter to the Dutch Parliament. These bottlenecks relate to the compensation of entrepreneurs’ expenses in the first emergency package, the expenditures compensation in the second package in relation to owners of small businesses, the detrimental effects of COVID-19 on a small-island economy and the associated increase of poverty.

The expenditures compensation for the private sector provided by the Ministry of Economic Affairs in the first emergency package was mainly used by entrepreneurs to pay the wage tax for the months April, May and June. However, this compensation contributed little to the alleviation of other monthly expenditures. This led to much doubt among the entrepreneurs as to the objective of the compensation.

The point of departure of the expenditures compensation in the second emergency package was mainly based on the situation of Bonaire, which has larger companies than the micro-economy of Saba where almost 90 per cent of the registered companies are so-called one-person businesses (“eenmanszaken”).

The applied formula of the compensation in the second emergency package excluded many small businesses because their turnover was too small. In the first emergency package many companies received a compensation of US $2,200. Entrepreneurs are very concerned about having to pay the third quarter wage tax in October.

The third concern expressed by the Island Council relates to the tourism sector. Because the harbour and airport have been closed to visitors since the COVID-19 pandemic, hotels, dive operators, taxis, the sole travel agency and the local ferry have not generated any income for more than six months. Alternatives to generate some income through so-called staycations and a reopening of the airport are not possible in Saba.

“Saba’s small scale, combined with the closure of the island and the COVID-19 situation in St. Maarten, has resulted in severe damage to the already vulnerable local economy to an extent where bankruptcies and dismissals are unavoidable.

“With this development in the back of our minds, we, as the Island Council, are greatly worried about a further increase of poverty in Saba. This is already becoming visible through a reduced purchasing power, a backlog in rent and repayment to banks.”

The Island Council is also very worried about the general economy, which, apart from tourism, greatly depends on Saba University School of Medicine. With fewer medical students on the island, the retailers and apartment owners very much feel the effect.

The Island Council, during the virtual meeting and again in the October 5 letter, asked the Second Chamber to seek solutions together to prevent a complete standstill of Saba’s economy. A number of proposals were mentioned to reduce taxes for entrepreneurs and residents, and to provide cheap loans for the private sector.

The first proposal concerned a freeze of the wage tax for an indefinite time, which will give entrepreneurs and individual employees some direly-needed financial leeway.

The second proposal concerned a freeze of the general spending tax ABB for an indefinite period, which will financially benefit everyone on the island.

Thirdly, a freeze of the real estate tax for hotel properties and apartments was proposed, to help the owners to survive.

The fourth proposal was to facilitate more investments in local businesses through attractive loans. This will aid in preventing a further decline in this sector.

In the last part of the two-page letter, the Island Council sought attention for the so-called free allowance (“vrije uitkering”), the amount that the public entity Saba receives on a yearly basis from the Dutch government to cover government’s operational cost. This allowance has been too low for years to adequately govern the island. The Island Council asked the Second Chamber for its assistance in helping to solve this lingering issue.

Several Members of Parliament made mention of the Island Council letter and Saba’s situation during this crisis, during the handling of the 2021 budget for Kingdom Relations in the Second Chamber on Tuesday.