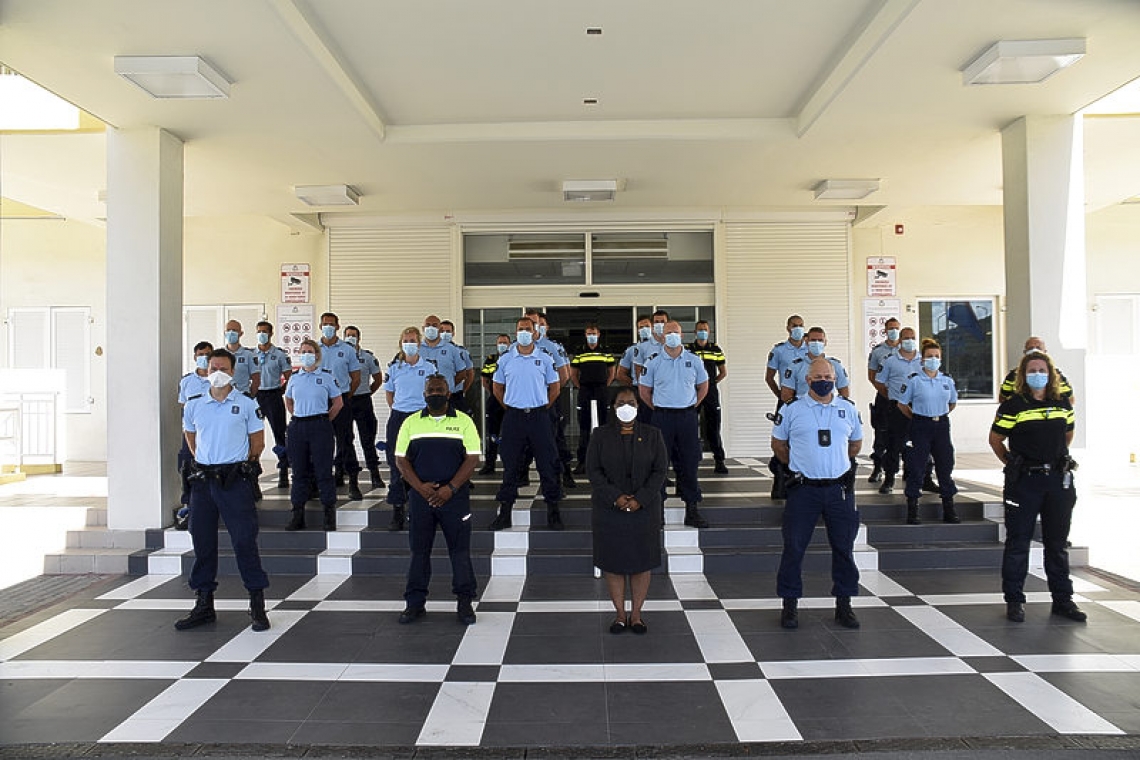 Justice Minister Anna Richardson administered the oath of office to at least twenty police officers and marines at the Government Administration Building on Pond Island on Friday, May 1. In photo: Minister Richardson (front row, centre) with personnel of the St. Maarten Police Force, the Royal Dutch Marechaussee and the Royal Dutch Marine Corps. Story on page .

PHILIPSBURG--Justice Minister Anna Richardson administered the oath of office to at least twenty police officers and marines at the Government Administration Building on Pond Island on Friday, May 1. These persons arrived in St. Maarten from the Netherlands on Monday, April 27, as reinforcements to assist authorities in maintaining law and order.

According to her, the reinforcements have been tested twice for coronavirus – once before their departure from the Netherlands and again after they arrived in St. Maarten.

She also said her ministry had consulted Prime Minister and Emergency Operations Center (EOC) Chairperson Silveria Jacobs about the request, which was formally submitted through Governor Eugene Holiday.

“Military assistance will serve to support our local law enforcement officers, who have all been working diligently to maintain a strong presence throughout our districts [in – Ed.] enforcing compliance with the lockdown measures.

“As such, the assistance will also help to bolster current efforts by our local Police Force in maintaining a ‘zero-tolerance’ approach to those who show blatant disregard for the lockdown regulations,” said Richardson.

She emphasised that “congregations of people in large groups on lockdown days, as well as [those] driving on the public road without authorisation, will not be tolerated.” Persons violating the lockdown measures will be “dealt with according to the law,” she warned.

On behalf of the Council of Ministers, Richardson thanked those who had supported the request. She particularly highlighted Dutch Minister of Defence Ank Bijleveld.

Richardson also thanked the officers “who have come to assist our country during this very challenging time.”

“I commend and applaud the efforts of law enforcement who, despite working tirelessly each and every day, understand their civic duty and continue to make the best out of our current situation.

“It is therefore important that all citizens and residents return the favour by continuing to persevere and do their part by adhering to the measures put forth by CPS [Collective Prevention Services] and the EOC during this lockdown period,” said Richardson.