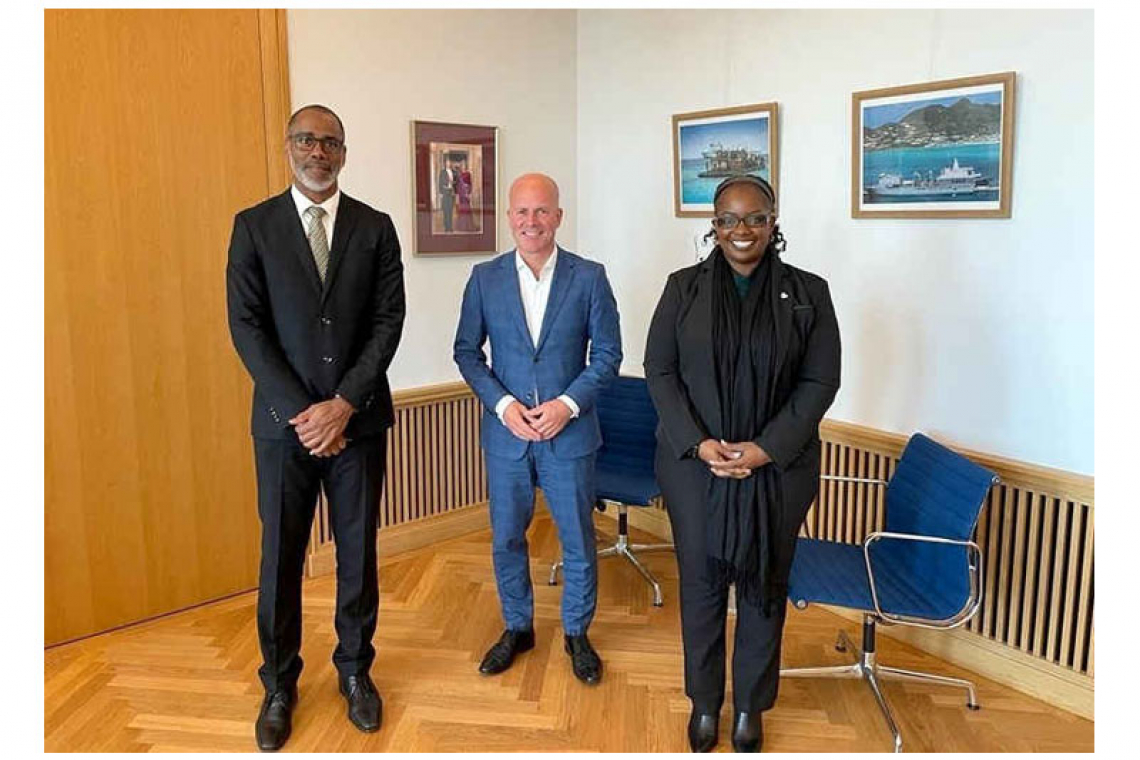 THE HAGUE--Justice Minister Anna Richardson and Dutch caretaker State Secretary for Interior Affairs and Kingdom Relations BZK Raymond Knops met together with Minister Plenipotentiary Rene Violenus, in The Hague, on Thursday, September 23. High on the agenda was the realisation of a new prison on St. Maarten.

Minister Richardson and State Secretary Knops are both dedicated to the building of a new prison, and agreed that in the coming weeks, important milestones must be achieved. During the meeting the Plan of Approach for the Pointe Blanche prison was discussed, as well as the agreements that were made with the United Nations Office for Project Services (UNOPS) for the new construction.

Richardson and Knops agreed on the way forward in the discussions with UNOPS and affirmed their commitment to finalising the process. Further discussions, regarding a clear timeline towards this end will take place on a technical level.

Discussing the first days of her working visit to the Netherlands, Richardson shared with the state secretary that her visit has already provided much-needed insight into how prisons function in the Netherlands, and how St. Maarten’s detention facilities compare to these institutions. The opportunity offered to see Dutch prisons has now more than ever strengthened Richardson’s resolve to have a new prison facility built on St. Maarten.

Richardson further shared her great appreciation for the enthusiasm that she received from the prisons’ directors and their support staff, and their willingness to assist St. Maarten with the challenges to its prison system. The minister expressed to State Secretary Knops that she truly wishes to build on the opportunity presented to further realise collaborative efforts between the Netherlands and St. Maarten.

The Plan of Approach for the Pointe Blanche prison was written at the end of 2017 by persons from the Dutch Custodial Institutions Agency (DJI), who came to St. Maarten from the Netherlands after Hurricanes Irma and Maria severely damaged the prison. Although written several years ago, due to circumstances the recommendations of that plan have not yet been implemented.

To implement the recommendations of the Plan of Approach, the Ministry of Justice in collaboration with the Ministry BZK embarked on a search for a programme manager to lead the execution of the plan. Robert Kievitsbosch was appointed as programme manager for the Pointe Blanche prison. He arrived on St. Maarten on August 1.

Richardson informed Knops that Kievitsbosch has been instrumental in ensuring that the minister saw various versions of penitentiary institutions in the Netherlands. Minister Richardson has now been exposed to various styles of operation that have great rehabilitation programmes, skill development and various levels of safety, security and specialist care offered to clients.

Kievitsbosch was requested by Richardson to continue to connect with his network in the judicial system to forge partnerships and explore the willingness to assist St. Maarten to improve both the detention facility of the Pointe Blanche prison and the Miss Lalie Center.

Under the guidance of Dennis Richardson, the heads of the relevant departments meet regularly to establish the plan of approach. The group is being supported with technical assistance to produce the first draft. This draft will provide a framework of the scope of areas that, once finalised, will be managed by a policy for the actions the authorised border authorities will have to act and execute their work on, in the effort to better protect and manage migration activities, visitors and shipments that enter and exit St. Maarten.

Measure H.11 can be considered a continuation of the border strengthening project (“Onderlinge Regeling Versterking Grenstoezicht St. Maarten”) that came into effect in 2018, Richardson said. “That project with the financial and technical assistance from the Netherlands saw to it that St. Maarten’s border protection agencies, such as Immigration, Customs and the Coast Guard, received the necessary resources and capacity building to improve their operations.”