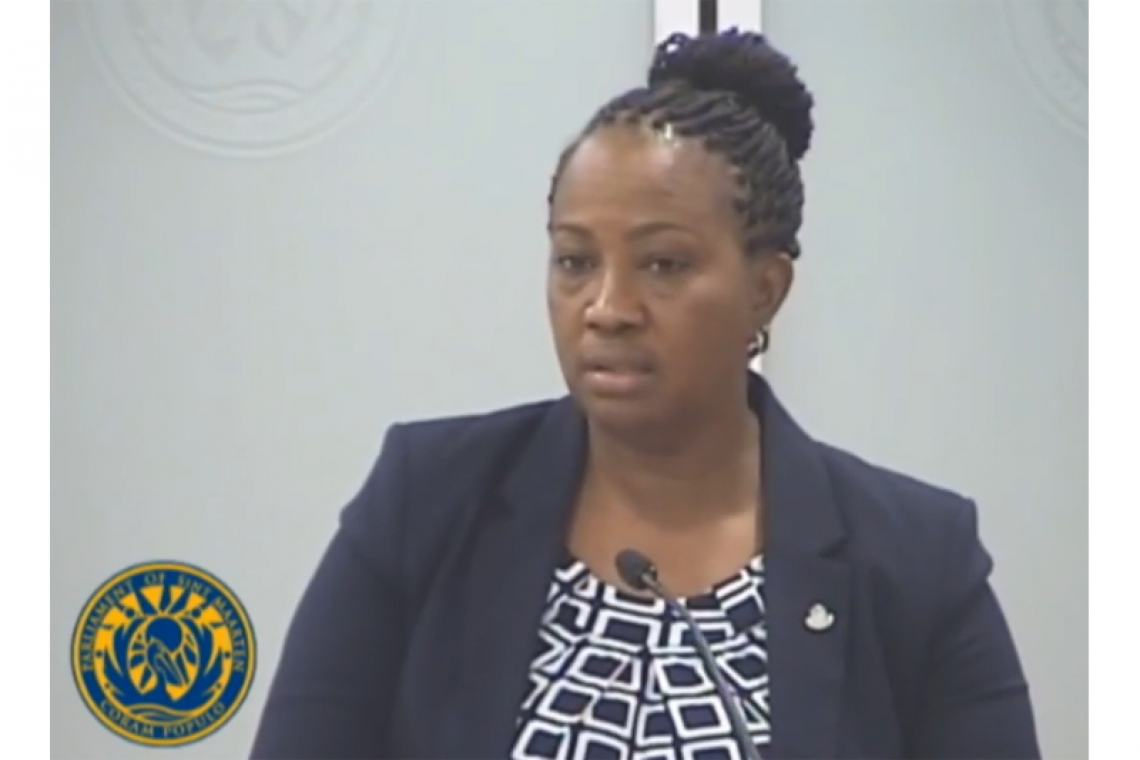 PHILIPSBURG--The authority of the proposed Caribbean Entity for Reform and Development COHO does not trample on the powers of government or Parliament, Prime Minister Silveria Jacobs told Members of Parliament (MPs) on Monday.

Jacobs’ statement came during an emergency Central Committee meeting to update MPs on the negotiations with the Dutch government for further liquidity support (see related story), for which the Netherlands has insisted on a so-called reform entity to manage the funds.

The governments in The Hague and Philipsburg hope to agree to a deal during the Kingdom Council of Ministers’ meeting this Friday. However, before doing so, the Dutch Cabinet requested explicit approval from the St. Maarten Parliament, among other guarantees.

The third tranche of support funds consists of some NAf. 61.5 million, which will be released to St. Maarten once an agreement has been made, Jacobs told MPs. Part of the funds will be for an additional four months of the St. Maarten Stimulus and Relief Plan (SSRP), covering September to December 2020. Government had earlier opened applications for the SSRP’s projects, but the funding will not be available until after the third tranche has been released.

The remainder of the third tranche will be used to cover the country’s budgetary shortfall.

A successful agreement will also extend the repayment of the NAf. 50 million loan for 15 years, said Jacobs. This loan was originally set to mature on October 21, but the Dutch government granted a four-week postponement in mid-October, followed by another in mid-November.

An agreement also has implications for the St. Maarten Trust Fund. According to Jacobs, about 80 per cent of the Trust Fund has already been committed to projects and, considering possible cost overruns, the Netherlands wanted to maintain a reserve.

The DPO – which would have sought to strengthen public-sector financial management, improve the sustainability of the social insurance system, and boost resilience to natural disasters – will be transferred under the COHO, and consequently a maximum of 15 million euros may be given to St. Maarten as a grant in mid-2021. However, this will depend on the remaining funds in the Trust Fund at this time, Jacobs told MPs.

The Netherlands has also committed to providing St. Maarten with funding in the country package to strengthen the rule of law. This amounts to some 2.7 million euros for Customs and the Royal Dutch Marechaussee KMar to beef up border control, and a one-time fund of 30 million euros for the construction of a new prison and improvements to the country’s other detention facilities.

The Dutch proposal is for a period of six years, with an evaluation after three years. Jacobs said there is “exit clause” embedded in the deal, and the Netherlands and St. Maarten can jointly decide to end the agreement prematurely.

When the reform entity was first proposed by the Dutch Cabinet in July, the governments of Aruba, Curaçao and St. Maarten saw the proposal as a violation of local autonomy.

However, Jacobs told MPs on Monday that the COHO does not derogate the powers of government and Parliament.

The COHO’s task will be to support and supervise the projects executed by government bodies and public companies, Jacobs said. These projects and measures are outlined in the so-called country packages, which are specific to each Dutch Caribbean country.

“The COHO does not affect the role of the countries, including legislation and budgetary powers. The body cannot exercise any powers that are vested in government bodies under national laws,” said Jacobs, quoting from the draft Kingdom Consensus Law that would establish the entity.

The COHO will have its own responsibilities, with “extremely limited authority to execute of its own volition,” said Jacobs. “Its authorities are mainly derived from the agreed-upon structural reforms between St. Maarten and the Ministry of [Home Affairs and Kingdom Relations – Ed.] BZK. The COHO does not have any legislative or administrative powers. These still lie with the government and Parliament.”

According to Article 17 of the Kingdom Consensus Law COHO, the Dutch Minister of Home Affairs and Kingdom Relations will allocate funding to the reform entity to realise the structural resources, Jacobs told MPs.

“In Article 19, the authority [of the COHO] is further limited to requesting data that is reasonably necessary with regard to, for instance, audits. The explanatory notes state that these are carried out on the basis of international standards,” said Jacobs.

In her statements to MPs, Jacobs hinted at the possibility for the COHO to buy shares in government-owned companies.

“In that regard, the Netherlands has agreed to an addition of further clarification under the authority of the COHO to purchase shares in companies. It was emphasised, or it will be, definitely, that the powers of the shareholders remain untouched and can be implemented in accordance with the statutory provisions,” she said.

Each Dutch Caribbean country had to agree to several conditions for further liquidity support, said Jacobs. In addition to the Kingdom Consensus Law and the country packages, the conditions included changes to the Kingdom Consensus Law on Financial Supervision RFT, greater transparency to the Committee for Financial Supervision CFT, modernisation of legislation for the financial sector, and no cuts to entities upholding the rule of law.

Jacobs said government does not know what the amendments to the RFT “will entail exactly”, but she assured MPs that St. Maarten will have a say in their “drafting and interpretation”.

Some of the amendments on the table are sanction options, an advisory role for CFT on policy choices, as well as changes to budgetary rules, the allowable debt ratio, and the provision of information to and from the CFT.

St. Maarten’s country package will include the SSRP’s execution from September to December, implementing the legislative amendments for the second tranche conditions, and implementing the measures related to the third tranche, said Jacobs.

She also said the execution of country packages will be guided by a so-called implementation agenda.

“This agenda is drawn up jointly by the [COHO] and the Minister of General Affairs of the country. An implementation agenda contains, in any case, the projects, the programmes and the measures that are required to achieve the strategic policy goals stated in the country package, and mentions the prioritisation, the performance indicators, critical success factors, and financing method,” said Jacobs, adding that St. Maarten’s implementation agenda must be ready as of April 1, 2021.

Although not going into the finer details of the country packages, Jacobs did disclose that an increase in the pensionable age has been delayed to 2025. She said it will only be raised after a feasibility study has been conducted.

Jacobs told MPs that she also wants to implement a “counterpart policy” that would train local professionals. “We would then be able to strengthen government’s administration to continue to function after this law has expired,” she said.

The Kingdom Consensus Law now on the table is what has been negotiated by Curaçao and Aruba, said Jacobs.

St. Maarten was previously barred from entering negotiations with the Dutch government until mid-November. By this time, both Curaçao and Aruba had negotiated changes to the entity, and the draft Kingdom Consensus Law had been sent to the Dutch Council of State – an equivalent to St. Maarten’s Council of Advice.

“When St. Maarten was allowed to engage in the discussions for the third tranche, no more amendments could be made to the law, as it had been already approved by the Kingdom Council of Ministers. That is why, in our discussion, clarifications were provided and only additions to the explanatory memorandum were still possible. And this will be assessed once the documents return from the Council of State,” said Jacobs.

Curaçao and Aruba has posed questions to the Council of State that include queries about the composition and method of appointment of COHO members, guaranteeing the budget rights of Parliament, and the lack of redress for discontinued and suspended financial support.

“We have, at this moment, no other viable option for St. Maarten to be able to sustain itself financially. And therefore, we are ready to accept [the deal] knowing that we will be able to execute the needed reforms for more effective and efficient governing. …

“Our vision is that this country will be a strong, multi-pillar economy, a place where opportunities exist that empower each citizen to realise his or her own strength to progress at all levels. …

“Although today we are requesting your support in accepting conditions for the third tranche of liquidity support from the Netherlands, I believe that this should be the very last time we are caught with our pants down, unprepared for any disaster. … It is time we stand on our own two feet and, in so doing, let us use the expertise and capacity that can be had from this COHO,” Jacobs concluded.