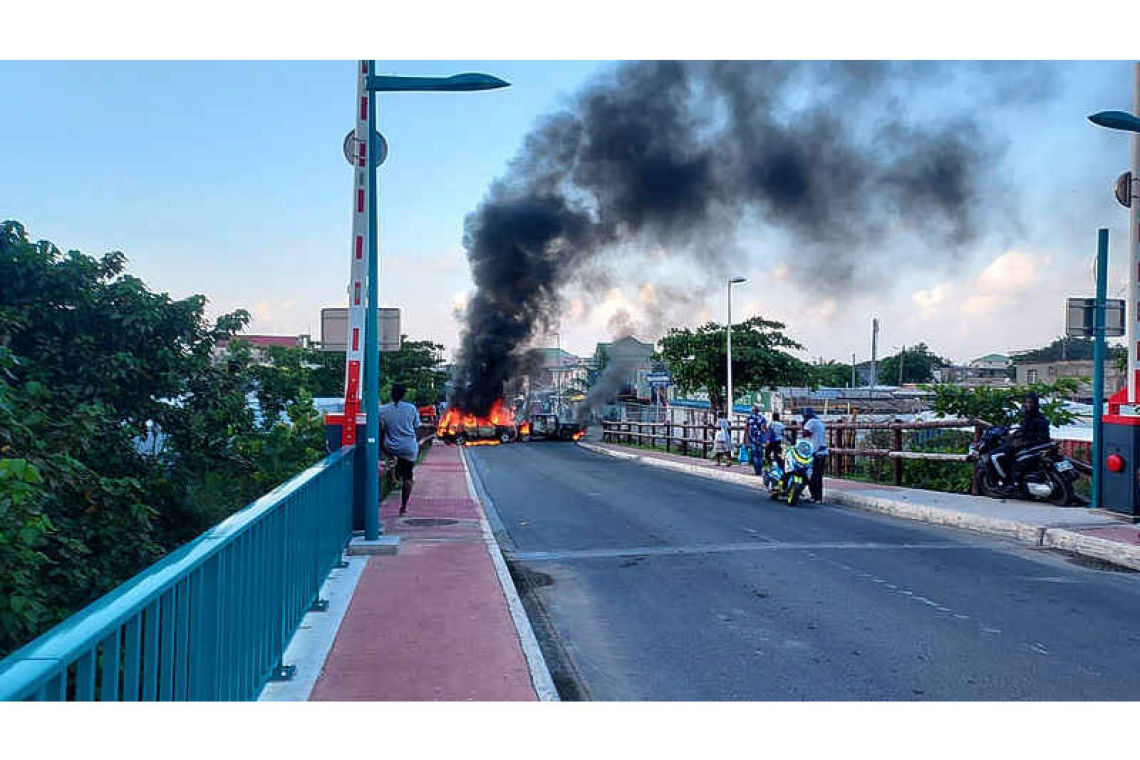 MARIGOT—Disruption on the roads of the French side by protestors resumed from very early Friday morning as the controversial health pass requirement for St. Martin came into effect. Préfet Serge Gouteyron labelled protestors as “tyrants.”

Attempts were made to block roads in Sandy Ground, Agrément, Bellevue, and French Quarter. However, a strong presence of Gendarmes were ready and, in most cases, removed barriers as soon as they were erected. Two cars were set on fire, blocking the bridge in Sandy Ground. There have been some arrests.

The Préfecture is grappling with managing two crises: resistance to the health pass and resistance to mandatory vaccinations which have both become law in France, with no exceptions. Some 120 health workers from the hospital are defying the vaccination obligation.

Préfet Gouteyron confirmed there have been eight suspensions at the hospital so far since a vaccination status became obligatory from October 15. It was not clear if these suspensions are temporary or permanent, however the hospital is following the law to the letter.

In a strongly worded declaration to the media on Friday morning, the préfet called protestors “small, little tyrants trying to block the country with only one ambition, to create chaos and disorder and to impose their own law.”

He continued: “They are mistreating the cause they are pretending to defend. Where is the Friendly Island? They are behaving like spoiled children and have only one ambition, to bend the authority of the préfet, by pretending they are not being given respect. But my door was always open, and still is.”

Gouteyron said such protests undermine the good work the State and Collectivité is trying to accomplish in the general interest for the good of the island, and noted because of the emergency Friday morning, a meeting on unemployment had to be cancelled.

“35 per cent of young people under 25 years coming out of school have no qualifications,” he reminded.

The situation is fluid and continuing to evolve.