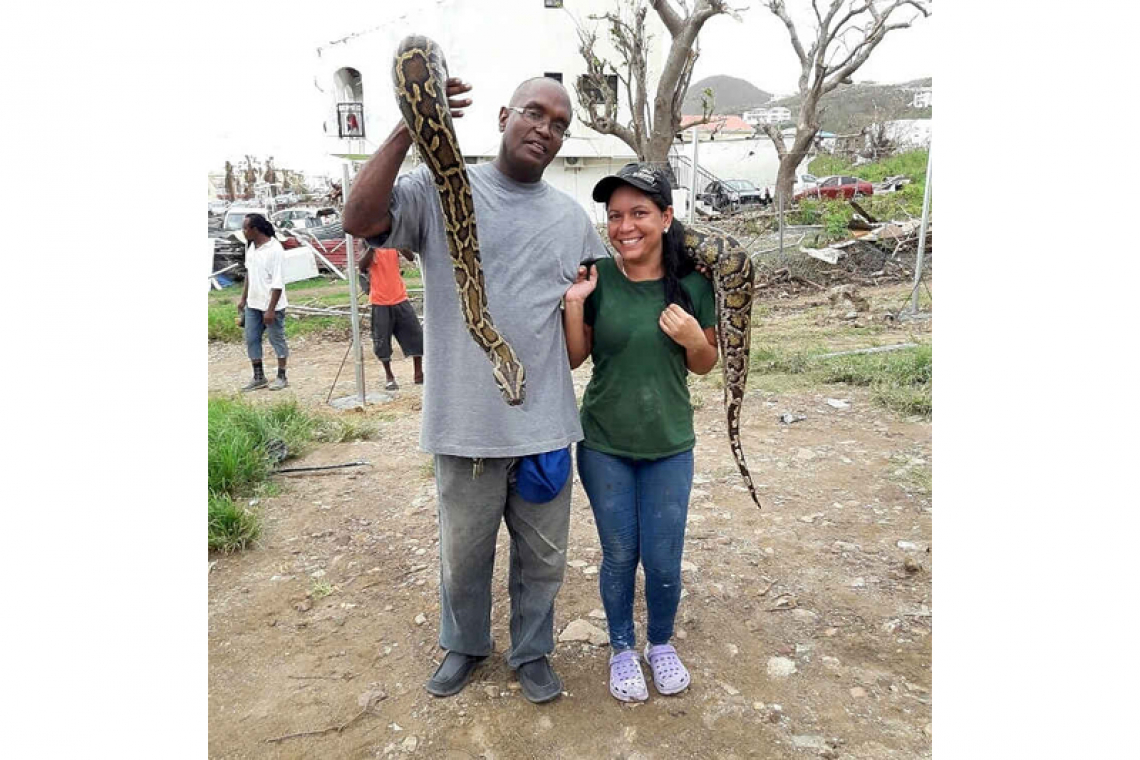 The 12-foot-long python was taken on Tuesday by police officers.

PHILIPSBURG--Police officers accompanied by St. Maarten Nature Foundation removed a 12-foot-long python that was kept in captivity as a family pet.

The removal of the animal was ordered after a tip was received about a large snake seen in public recently.

The owner of the python, Leo Wathey, spoke to The Daily Herald on Tuesday. He said the snake, named Conda, has been a family pet for more than 25 years.

Wathey said he had bought the animal from a pet store in St. Maarten. At the time he got the animal it was merely two feet long. Since then it has grown to about 12 feet. Despite its size, the owner said the animal never caused any problems or issues for the family, that it has always been very tame and docile. Because of this, the family often used it for photoshoots or certain events.

Wathey said the snake was always kept in a proper enclosure “under lock and key”. However, with the passing of Hurricane Irma in 2017 the enclosure suffered some damage. He said the family had been meaning to rebuild the enclosure properly since then, but were unable to do so.

Wathey said his brother had taken the snake to Cole Bay on Saturday. While there, the large animal soon attracted the attention of several persons. He suspects that this might have been when someone sounded the alarm.

This newspaper spoke to St. Maarten Nature Foundation, which said it had been contacted by someone who notified them of the animal.

Foundation manager Melanie Meijer zu Schlochtern told the newspaper that in accordance with Article 29 of the General Police Ordinance, “It is prohibited to keep wild animals in any yard without a permit from the Minister.” In this case the Minister of Justice.

Ultimately it was the prosecutor’s decision to order the animal removed from the owners, as they did not have the proper permit to keep the animal.

Wathey said that even though the family may not get their pet back in their care, they are hoping to at least save its life. He was given until Thursday to find a place for the snake or he said the animal will be euthanised. Given that the snake has been with the family for more than 25 years the owner said it would be sad for it to be killed.

The owner told the newspaper that he hopes to have the animal sent abroad as a means to save it from certain death. He voiced his frustrations over the limited amount of time given to him to properly relocate the animal, noting that he will have a mere two days to find a facility that will house the snake.

Meijer zu Schlochtern said the foundation can assist the family with obtaining a Convention of International Trade in Endangered Species in wild flora and fauna (CITES) export permit. CITES is an international agreement between governments on the protection of wild animals and plants.

If the family are able to obtain this they may be granted their wish to re-home their beloved pet.