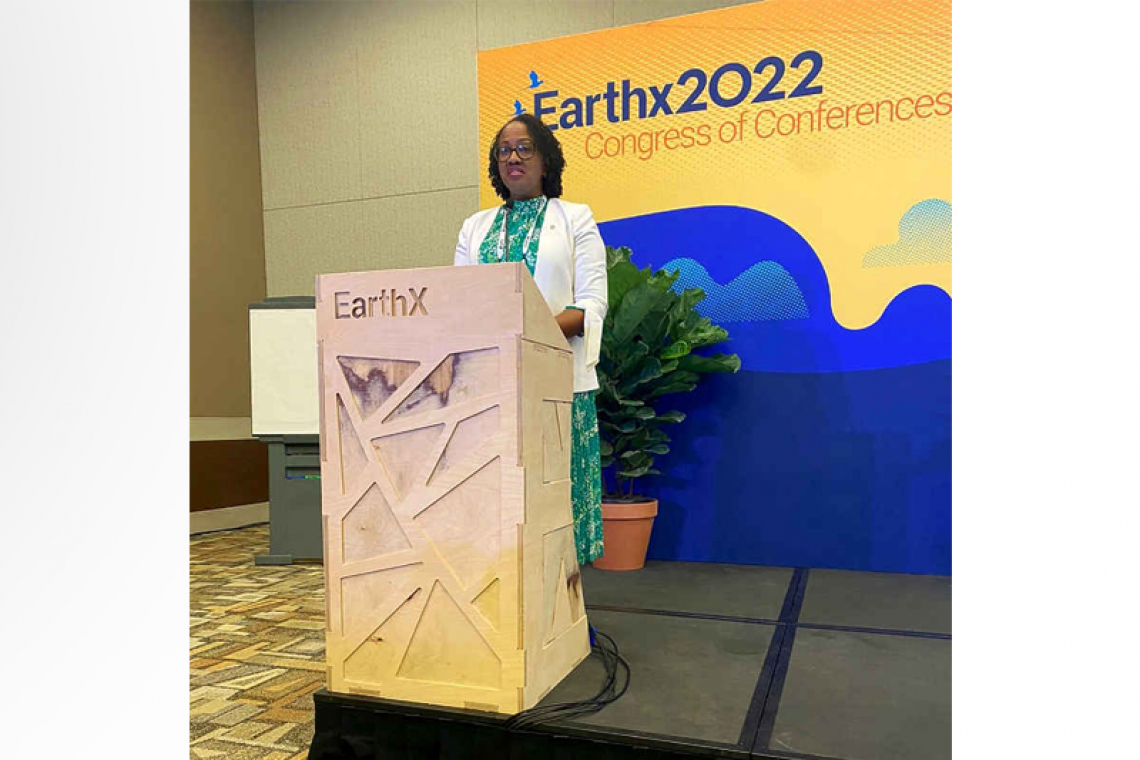 The trip served as a means to cultivate relationships and form partnerships to advance advocates, investors, accelerators, and researchers on sustainable environmental activities, it was stated in a press release.

The event kicked off with a series of panel discussions, presentations, and interviews on April 20. Jacobs opened the first session with a speech on women’s leadership in the sustainable fashion movement.

On April 21, Jacobs participated in a session with GridMarket CEO Nicholas J. Davis where they discussed the St. Maarten-GridMarket-Island Resilience Partnership engagement and the opportunity to invest in the national energy transitions of small island developing states (SIDs).

Through the partnership with GridMarket, St. Maarten is now exploring and securing the transition to renewable and sustainable energy. This will allow St. Maarten to receive support in developing an energy roadmap aligned with the new global roadmap issued by the United Nations (UN) last September, which seeks to achieve a radical transformation of energy access and transition by 2030, while at the same time contributing to net zero emissions by 2050.

As a SID, St. Maarten is one of the smallest and most remote states in the world. “We are a diverse group of islands differing in population, size and development opportunities. Yet, we share common challenges and vulnerabilities that often prevent us from being able to invest in resilient and sustainable development, particularly as it pertains to renewable energy,” it was stated in the release.

Following the e-capital discussion, Jacobs addressed a gathering of youth at the Youngo Summit, a partnership for sustainable development goal 17 (SDG 17). This summit focused on launching the Preparing the Youth to become negotiators for the goals, an initiative launched on April 22.

“As an educator by profession, I have long been captivated by the youth’s willingness to peel back the layers to examine, critique and question norms. This is their strength! Often unhindered by tradition and full of optimism, this willingness to dissect combined with fresh ideas means youth are often well-equipped to address the ever-changing and multidimensional issues that form our common agenda,” Jacobs told the gathering.

“The Kingdom of the Netherlands has a voice in the global climate crisis discussions, and SIDs must be empowered to highlight our issues at these stages as well. As the only Caribbean island in attendance, I am proud to have been invited to promote St. Maarten on such a world stage and be able to bring awareness to the challenges we face.”

Her participation in the summit culminated in an activity introducing the concept of a reciprocity ring. Designed to foster skills in stakeholder building and negotiation, participants sat in a circle posing clear requests, accompanied by a timeline. Fellow group members then indicated their ability to assist or offered guidance or suggestions to achieve the request.

On April 22, Earth Day, as the only Caribbean island represented, Jacobs delivered the Island Resilience Partnership keynote address. The Island Resilience Forum brings island leaders from all around the world together, not only to discuss solutions to the UN SDGs but also to develop partnerships to achieve these goals.

In attendance this year were the ambassadors of various Pacific islands (Tonga, Tuvalu, Samoa, Kiribati) and the ambassadors to the Solomon Islands. They all spoke of their challenges with climate change, whether it be the loss of islands due to the rise in sea level, the adverse effects of overfishing and trawling, or other natural disasters. Islands share one commonality: though small, they are greatly impacted by the effects of climate change.

In her keynote address, Jacobs highlighted the importance of securing utility sectors, based on our history with Hurricanes Luis in 1995 and Irma in 2017. They revealed energy vulnerabilities such as having our sole energy plant in a low-lying coastal area while damage to overhead cabling required a large-scale recovery effort to restore power in specific areas.

Additionally, “The COVID-19 pandemic revealed social, economic and financial vulnerabilities. It resulted in the loss of employment and a rise in the cost of living, since St. Maarten is heavily dependent on imported goods and services, which experienced significant disruption in the supply chains. Our response to this so-called ‘new normal’ has been to redouble our efforts for sustainable national development,” Jacobs mentioned.

Energy, in this regard, is seen as one of the main drivers that affect the cost of living. It affects transportation cost, food prices, healthcare expenses and, of course, utility cost. Needless to say, energy also affects our environment. The fluctuating world prices of petroleum constitute an enormous financial burden on the people and their quality of life.

Jacobs was invited to speak on April 22 on the role of private investment in achieving the SDGs. Organised by the UN Family Offices for Sustainable Development (FOSD), the programme is managed by PVBLIC Foundation and the UN Office for Partnership.

FOSD brings together small groups of global family offices, privately-held companies that handle investment management for a family of means, committed to advancing the completion of the SDGs to create greater impact via collaboration with UN agencies and with each other. In her address, Jacobs spoke on the importance and opportunities of investing capital in parts of the world that are on the front line of the climate crisis.

Jacobs gave a talk at the UN SDG Media Summit on April 23, under the theme Fostering Leadership, wherein she highlighted the youth of St. Maarten building awareness of the UN SDGs, as well as their view on the approach to achieve them. The UN SDGs video featuring St. Maarten students expressing their knowledge, awareness, and ideas about the SDGs, including Climate, through the arts, received a resounding commendation from the audience.

One audience member stated, “The video brought me to tears.”

The Media Summit exchanged ideas, as it seeks to ensure the best use of media is used to bring to the general public more awareness of climate change in particular and the SDGs in general to increase participation in the achievement of the goals. The clear conclusion was to ensure the messenger is relatable, conscious of its audience, representative of all of humanity, and that all possible and variety of media forms should be used with messaging being repeated often.

The Blockchain Impact Finance Summit moderator requested that Jacobs close off the summit on April 23. During this session, Jacobs highlighted the importance of technology and innovation in supporting emerging economies around the world, especially for St. Maarten as a SIDS.

“Our Minister of Finance, being a millennial himself, is a proponent of the emerging blockchain innovation, and has been trying to educate us as a Council of Ministers and Parliament on the proponents and the adverse effect it can have on our economy, as we work to diversify our one-pillar economy,” said Jacobs.

“It’s their world, they were born to it, we’re the immigrants,” Jacobs said, referring to the age of information and the youth.

“As countries (not only SIDS), focus should be on the emerging technologies, as this can help us in achieving SDGs 1, eradicating people in poverty, and 2, ending world hunger. Combining these innovations to achieve SDG 1 and with the partnership for the goals, SDG 17 is observed as a more viable option for SIDS to achieve and sustain our populations for continued financial and economic resilience beyond 2030,” stated Jacobs.

A high-level gala was organised on the last day, to celebrate partnerships and thank this year’s participants.

“The EarthX 2022 Forum was a huge success for St. Maarten, as the island was heavily featured on the international stage for four consecutive days,” it was stated in the release. “The feedback received was very encouraging, lending to potential prospects for investment, creating new partnerships and, most importantly, may accelerate our goal for renewable forms of energy in St. Maarten way before the 2030 goal. Funding possibilities exist and I am committed to finding them for St. Maarten.”

Jacobs said that in the coming months St. Maarten will continue building on the foundation laid at the EarthX 2022 Forum, having already scheduled meetings and follow-up plans with several key stakeholders. “Using this momentum, I encourage all local stakeholders to also do their part in St. Maarten. By the end of 2022, and early on in 2023, a roadmap with GridMarket will be established, paving the transition to renewable energy prospects,” it was stated in the release.