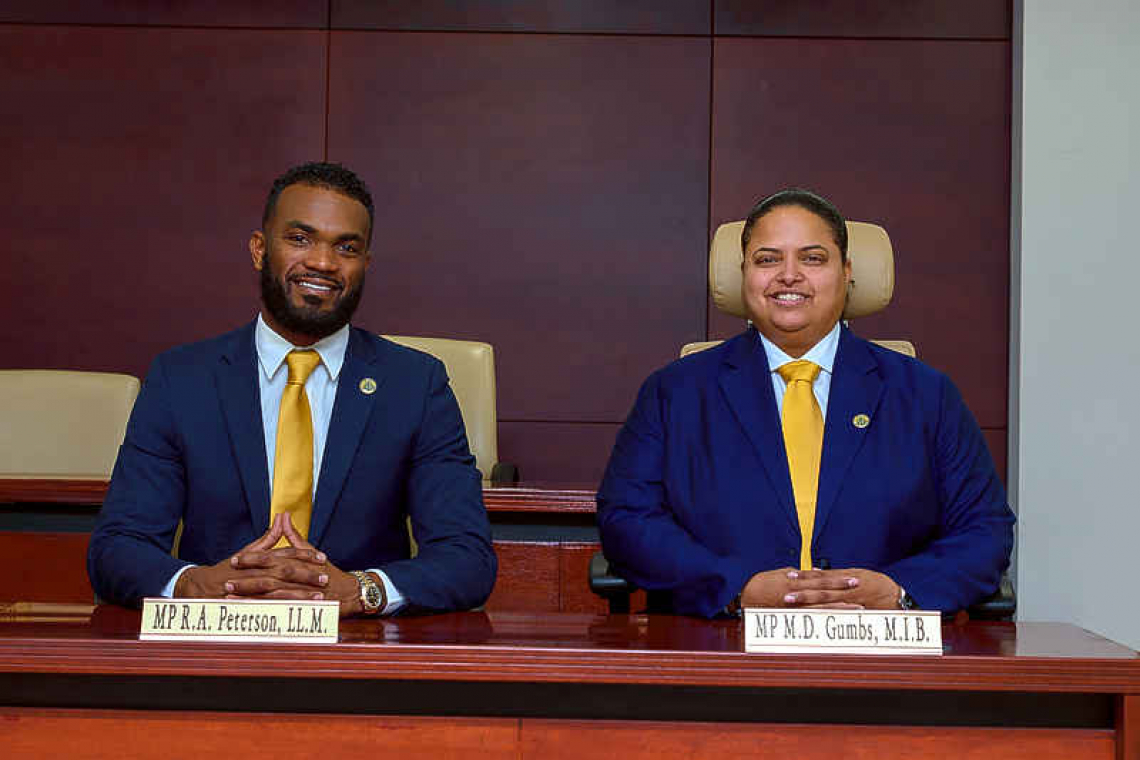 The MPs are calling on members of the media to unify under the banner of a press association, and for government to work with journalists to amend the policy in a way that guarantees press freedom.

“A press association is the norm in other Caribbean countries to ensure that policies, such as the one recently issued by our government do not trample on the freedom of the press. How can the press be an effective check on the government if it is the government itself that selects which journalists can question them?” Gumbs said.

“This policy is setting a dangerous precedent and it reeks of Trump-like tantrums – when we don’t like a question, we make sure the question may never be asked. We have to question why this policy is being rolled out now, instead of finalised in 2017 when it was first drafted.”

“The Prime Minister said in the press briefing of Wednesday, April 13, that the goal of the policy is not to stifle the press, but to foster objective and unbiased journalism standards in St. Maarten. This is quite interesting, as this policy is obviously biased in itself. The content blatantly contradicts itself, making it a very subjective and at-times-confusing document,” Peterson commented.

The PFP faction did agree with the fact that stricter security measures should be taken, especially where a majority of the Council of Ministers are meeting together.

“In this situation, one highly motivated, armed and callous person could leave us without a government,” said the PFP MPs.

“However, when the security measures are targeted only at journalists, and not everyone who is entering into that restricted space, such as other government staff, you are openly showing that your concerns are not so much on security as it is harassing the journalists who have come to question you. Will this type of screening now be applied to every meeting that the Council of Ministers will have with external parties, or is this a special consideration for journalists?”

Also of concern to the PFP MPs are the areas in the policy that are highly subjective, which leaves much of what can be done to members of the press up to the whims of the government’s Department of Communication (DComm), all without an independent process of appeal.

One such area is under the heading, “Persons not eligible for Accreditation.” The policy states that applicants may not be jointly employed by or work on the instructions/directions of a political group, party or movement. This is a statement that PFP found very curious for several reasons.

“Over the years we have seen, through writing styles and the persons they chose to target, how some media houses have appeared to support one political group or another. With all due respect to DComm, how will they ascertain who is jointly employed by political parties/groups? Will it just be left up to the DComm Director’s own opinion, while they themselves are a political person?” questioned MP Gumbs.

“Someone’s political affiliation being used to justify their being denied entry to a job is very typical throughout St. Maarten’s history. This should no longer be the case.”

PFP noted that there are several mentions of journalists being denied entry if their activities ran counter to the principles of government, General Affairs, or DComm. The MPs wonder where these principles are clearly listed and who judges whether the journalists are “counter” to them. They stated that such a position speaks to future “moving of the goalposts” for press personnel who may be unaware that they are behaving against the so-called “principles” of government.

“The policy picks and chooses who is eligible for accreditation or not and this is very alarming,” Peterson said. “It simply says that civil servants are not allowed in the press briefing because this is a conflict of interest. But why? Based on what legal grounds, or any official document, has it been decided that being a civil servant automatically results in a conflict of interest? What about our constitutional right of Freedom of the Press as per article 10 of the constitution?

“Has it been taken into consideration that our laws give the option for the Minister to give civil servants approval/permission to work outside of government, the so-called “nevenwerkzaamheden? Where, by law, have civil servants been excluded? The constitution clearly says that rules regarding this constitutional right have to be set by national ordinance, so the question is if this mere policy actually has a legal basis in the first place.”

“If we’re being transparent, the government should come to Parliament if it is seeking to regulate what is essentially a constitutional right,” Gumbs stated. “Much like the bypassing of the LB-HAM process by making a policy for tenders and the rushing of a deficit budget without legal dispensation, this governance-by-shortcut trend continues with this media policy.”

“Just one line above that, it states that media personnel may not use the name, likeness or personal attributes of any ministers without their express permission,” Peterson continued.

“If this were a line that could actually be taken seriously, there would be no news. We aren’t talking about permitting slander or libel; we are talking about the principles of journalism. If newspapers cannot print pictures of ministers anymore, then who are public officials? Commentary shows cannot use video snippets to inform the public and give their own insight on what was said? There’s no news in this case, just Russian-style censorship.”

It is also unclear who judges journalists’ adherence to the Code of Conduct, and what all qualifies under the subjective terms “good manners” and “insulting words or gestures”.

“There must be respect and decorum between the journalists and ministers in the press briefing. But this Code of Conduct only sets the bar of accountability on journalists. There is no equal weight on the conduct of ministers, who often answer questions in passive-aggressive and condescending ways. Who will rein in the ‘Honourable’ Ministers’ when they behave inappropriately, as we have already seen?” concluded the PFP MPs.

Gumbs confirmed that the faction had requested an urgent meeting of the Committee of General Affairs to discuss the policy among their peers in Parliament.