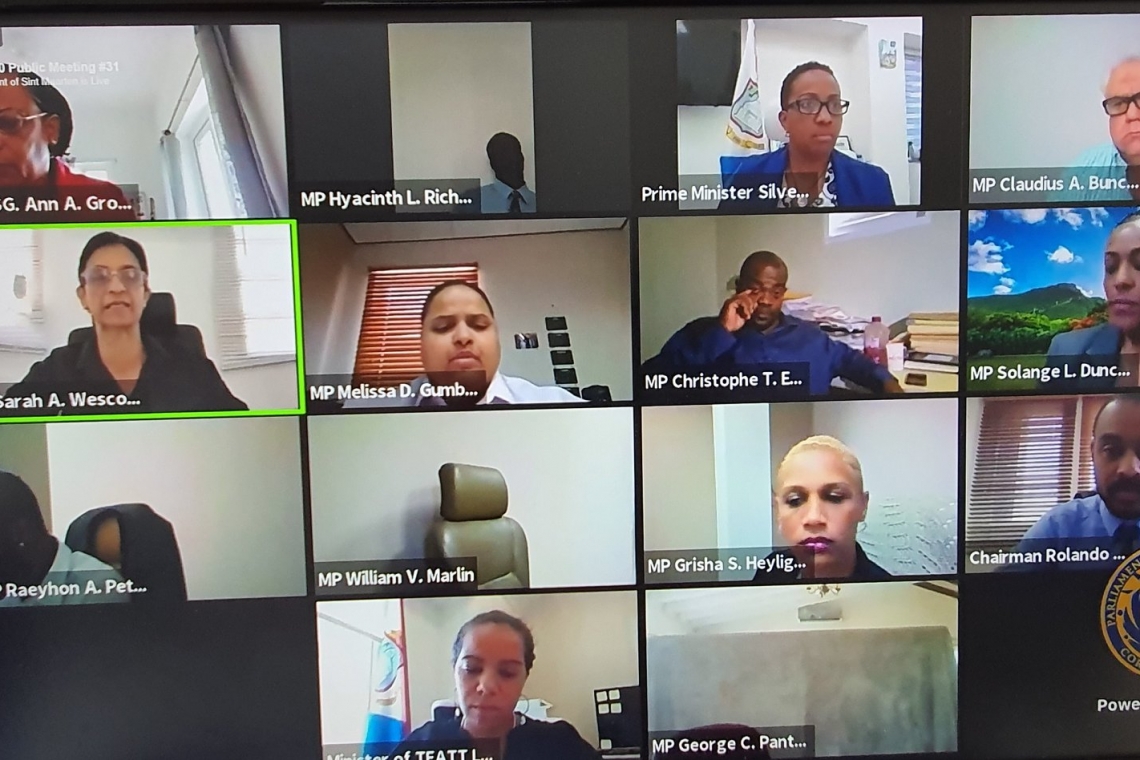 PHILIPSBURG--Parliament on Wednesday unanimously rejected the Caribbean Reform Entity proposed by the Dutch government as a condition for Curaçao, Aruba and St. Maarten to receive the third tranche of liquidity support. Parliament also approved Prime Minister Silveria Jacobs to travel to the Netherlands to represent the country in Friday’s Kingdom Council of Ministers meeting.

All 15 Members of Parliament (MPs) voted to pass a motion to reject the proposed Caribbean Reform Entity (in Dutch, “Caribische Hervormingsentiteit”) at the end of Wednesday’s seven-hour-long meeting that discussed whether St. Maarten should accept or reject the entity.

One of the conditions is the proposed entity, which must be accepted by St. Maarten, Aruba and Curaçao in a Kingdom Council of Ministers meeting slated for Friday.

Jacobs said government had requested postponement of the meeting because St. Maarten wanted to thoroughly peruse the 218-page document outlining the entity and to ask for advice from Parliament, the High Councils of State and other relevant external bodies. She said about 80 pages referred to St. Maarten, with the remainder relating to Curaçao and Aruba.

The Dutch government denied that request on Wednesday, keeping a hard deadline set for Friday.

St. Maarten, Curaçao and Aruba received the documentation on Monday, a mere four days before the deadline. Dutch State Secretary of Home Affairs and Kingdom Relations BZK Raymond Knops was initially expected to hand over documentation to the Dutch Caribbean governments on June 29, but this was later pushed back to Monday. The Dutch government started working on the documentation in mid-May.

Parliament on Wednesday approved for Jacobs to travel to the Netherlands and represent St. Maarten at the meeting. Curaçao Prime Minister Eugene Rhuggenaath and Aruba Prime Minister Evelyn Wever-Croes have also indicated that they will attend the meeting.

What is the entity?

The Caribbean Reform Entity is to monitor the Dutch Caribbean countries’ use of additional financial support and would also wield far-reaching powers to enforce structural reform on the islands, not only in finance, but also in justice, health, education and infrastructure, among other areas.

Jacobs told MPs that the entity would take the form of an independent administrative body (in Dutch, “zelfstandig bestuursorgaan”), which would be established via a Consensus Kingdom Law.

She said BZK would be responsible for the entity and would also appoint its three members. The entity would report to the BZK Minister every six months and on that Minister’s request. It could also advise the Kingdom Council of Ministers to take measures based on the Kingdom Charter.

The entity would have the authority to initiate projects on the islands, as well as to finance projects in the public and private sectors. It could “even get into government-owned companies, including capital share,” said Jacobs. The entity also would have the right to withdraw funding if “sufficient progress” has not been made.

“The Minister of BZK in the Netherlands would, by virtue [of this entity – Ed.], be running the three countries. They would set the trajectory, they would have the ability to give instructions to that entity in terms of what is to be carried out, etcetera,” said Jacobs.

She hinted that there could be a substantial amount of additional funding available to the islands if the entity is accepted. She said she had a meeting with Knops on Saturday, July 4, in which he disclosed some more information about the entity ahead of submitting the documentation.

“The Netherlands is sweetening the pot; not only offering a third tranche but also the possibility for more funding for projects, for programmes, etcetera, making it very, very attractive. But what you will have to give up to be able to get that loan is quite heavy indeed,” said Jacobs during the live virtual Council of Ministers press briefing on Wednesday morning.

However, according to Finance Minister Ardwell Irion, the documentation does not specify how much further support is available or the amount tied to specific reforms.

MPs of all political parties were unequivocal in their condemnation of the entity.

MP Claudius “Toontje” Buncamper called the entity “criminal” and “inhumane”, adding that it would not be here to “help us, but to control us.”

MP Sarah Wescot-Williams of United Democrats (UD) called it “democratic undermining.” She was also wary of the short timeframe given to accept the entity. “We need to pull up the handbrakes.”

MP William Marlin of National Alliance (NA) characterised the entity as “abuse” and a “disrespect to government and parliament.” He said the way the entity was unveiled demonstrates the need for an independent dispute regulation in the Kingdom Charter.

MP Grisha Heyliger-Marten of United People’s (UP) party said the entity is evidence why the decolonisation process of the Dutch Caribbean should be completed.

MPs Raeyhon Peterson and Melissa Gumbs of Party for Progress (PFP) said the entity does not adhere to the mutual consultation process that a Consensus Kingdom Law is required to follow. Instead it is being presented to St. Maarten in a take-it-or-leave-it fashion.

Several MPs also highlighted the need to have a “Plan B” in place, as rejecting the entity may result in St. Maarten not receiving the third tranche of Dutch liquidity support.

Buncamper proposed to make US $100 million available by taking the assets of government-owned companies and “making them sellable” to Social and Health Insurances SZV. He said the agreement should have a clause for government to buy back the assets, while giving SZV the right to place the equity shares on the market after 10 years if government did not buy back the assets by then.

Parliament Chairperson and UP MP Rolando Brison said government can adjust the SSRP to “make the dollar stretch.” He also advocated “cash-flow neutral solutions” such as food vouchers, rental subsidies, and utility bill relief in exchange for the individual or company tax breaks. He also asked about the Central Bank of Curaçao and St. Maarten (CBCS) issuing bonds.

The motion was signed by all parliamentary faction leaders and Parliament Chairperson Brison.

Besides instructing government to reject the Caribbean Reform Entity, it directs government to “present a counterproposal to the Kingdom Council of Ministers.”