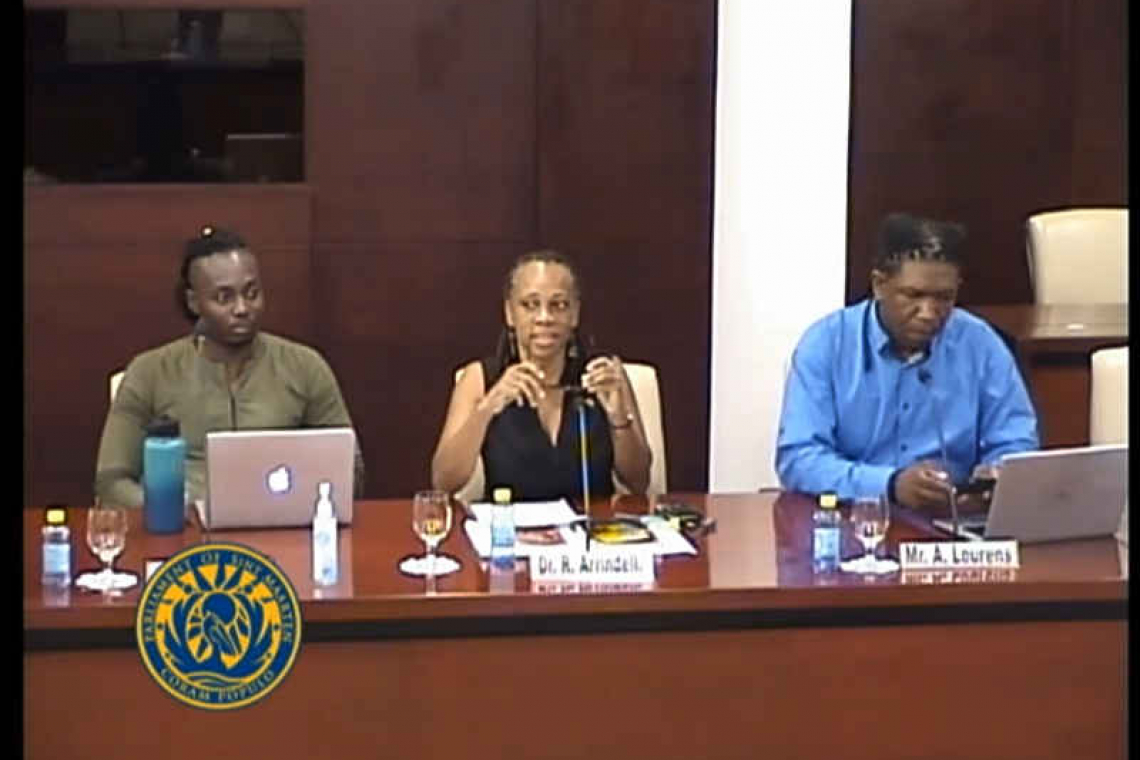 PHILIPSBURG--One SXM Association on Tuesday called on the legislature to hold a consultative referendum with the sole question: Independence for St. Maarten: Yes or No?

One SXM submitted a draft resolution to this effect. The resolution calls for a consultative referendum within two years, or latest by the next general election. The association Implored Parliament to make use of its constitutional authority to convene the referendum.

According to Arrindell, One SXM Association grew out of meetings with a number of individuals, groups, and organisations, and eventually it was decided to create a more structured way to engage as a people on topics related to St. Maarten’s cultural values, unity and eventual independence.

She made clear that One SXM Association was not a political organisation and was not the first organisation to call for a new consultation with the people on the matter of a referendum. Independence for St. Martin Foundation appeared before Parliament in May 2016 with the same plea and wrote a petition on advice of some members of parliament (MPs) at the time.

Arrindell said Aruba had carried out a similar referendum with the same question in 1977, so there was a legal precedent for St. Maarten.

For the most part, the MPs present were in agreement that the people should be consulted.

National Alliance (NA) MP George Pantophlet believes independence is the way to go. He said the issue tabled was Parliament preparing a national ordinance and letting the people determine whether they want to become independent or not.

Wescot-Williams wanted to know government’s position on the country’s constitutional future. She said the positions taken thus far are very ambiguous and the governing coalition cannot present a straight story on decolonisation or what its position is on the country’s current status, the latest discord on the amended UN petition being a case in point.

She said while One SXM Association has a clear request, before Parliament entertains such a proposal, a stance needs to be taken and presented to the populace. She wanted to know whether the governing majority is willing to give its position on independence and put that to the population and whether they are willing to put to the people the unilateral decision to again pursue a UN trajectory.

He said the best referendum that can be called currently is one that concerns the current decision of Parliament to go to the UN and government’s clear grievances against this international initiative. “That’s the purpose of the law, not to bring the people to an ultimatum based on emotional ideology that may have heart, but is not realistic at the moment,” Peterson said.

PFP MP Melissa Gumbs said she had no issue with a consultative referendum and suggested that students abroad should also be included.

United People’s (UP) party MP Rolando Brison asked five key questions. Lourens directed him to the Independence Foundation’s Facebook page, where the answers to those questions were included in the Frequently Asked Questions section. Brison said further that a consultative referendum is the highest form of democracy.

National Alliance (NA) MP Solange Duncan said that everyone could agree that the island’s autonomy had been trampled on and that it is a “very serious” time in St. Maarten’s history. She lauded that the conversation is now at Parliament for the proposal to be handed.

Blaise mentioned the importance of youth empowerment and involvement in the future of the island, adding that “a consultative referendum given to the people is a democratic process and should be coupled with a mechanism of public discourse.”

Arrindell added a quote from the Nations Declaration on the Granting of Independence to Colonial Countries and Peoples, that “inadequacy of political, economic, social or educational preparedness should never serve as a pretext for delaying independence” and that One SXM Association was looking forward to doing its part in helping to achieve independence once the people had voted for independence.