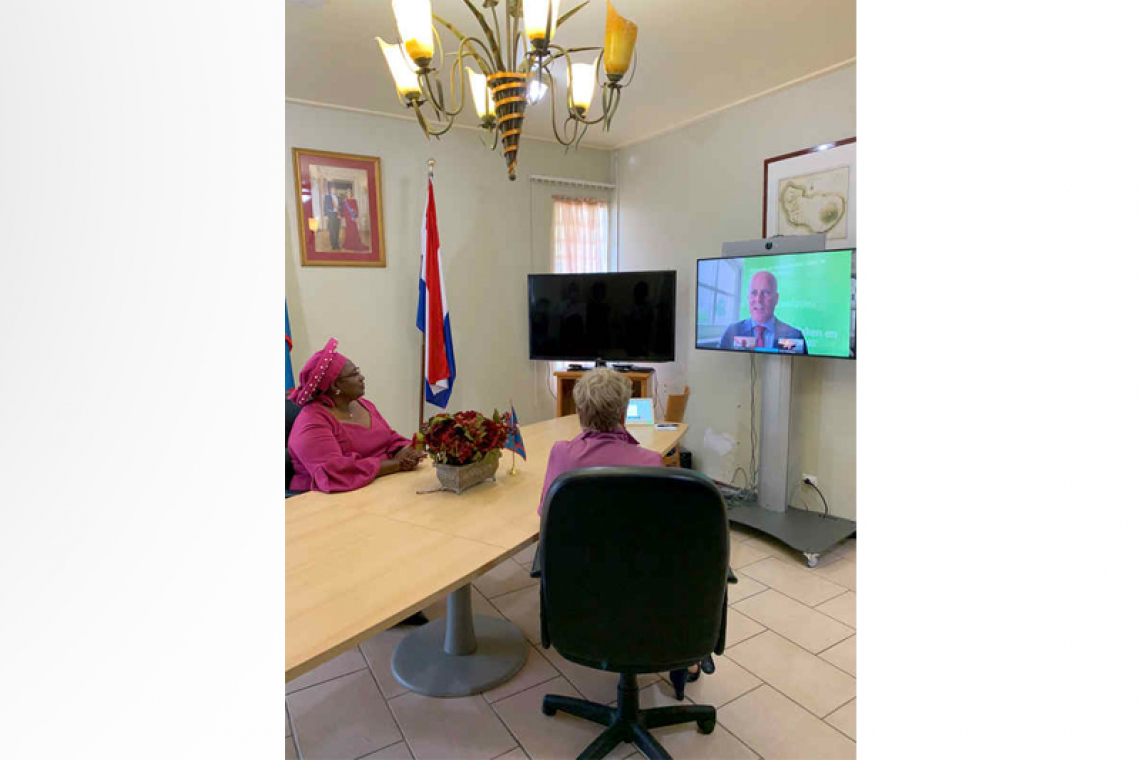 Government Commissioner in St. Eustatius Alida Francis (left) and Deputy Commissioner Claudia Toet were sworn in by State Secretary Raymond Knops via a video conference.ST. EUSTATIUS--Alida Francis is the newly appointed government commissioner for St. Eustatius. At the same time Claudia Toet has been appointed as the new deputy commissioner. The Dutch Council of Ministers approved the appointment of both candidates Friday morning, June 18, based on the recommendation by State Secretary of Home Affairs and Kingdom Relations BZK Raymond Knops.

The new government commissioner and her deputy will take office with effect from June 22, following the departure of former Government Commissioner Marnix van Rij earlier this year.

During a special ceremony on Friday morning Francis and Toet were both sworn in.  State Secretary Knops said that he was “very pleased” to swear both officials in.

“I am extremely happy that Ms. Francis will take up this honourable position as government commissioner. She has a lot of knowledge and was born and raised in Statia. I have no doubt that she is the ideal person to fulfil this position.”

Knops said that Toet has been working in Statia for a year and six months already and knows how to build bridges. “Alida and Claudia are a perfect match,” Knops said.

Francis was born and raised on Statia and has been working in the Dutch Caribbean for more than 30 years, two of which for the Government of St. Maarten, 18 years in Statia as Director of Tourism and more than 10 years as senior communications advisor for Government Service Caribbean Netherlands RCN.

She has served as deputy government commissioner in Statia since February 15, 2020.

“I eagerly look forward to continuing efforts to strengthen the civil service organisation, increasing the pace of the implementation of projects that will boost the local economy and working with the members of the Island Council on the Route Time-Table [for the restoration of democracy in Statia [Ed.],” said Francis.

“St. Eustatius is undergoing a major transformation. As a native Statian I am extremely proud to be a part of this transformation and will work with everyone who is willing to invest effort and time to lay a solid foundation for sustainable growth for our island; a foundation that is solid enough for future generations to build upon.”

Toet was born and raised in The Hague, the Netherlands. For the past 18 months, she has worked for the government commissioners in Statia as an advisor and change manager, as well as for the ministry of BZK as project leader for Statia.

Previously, she was employed by the municipality of Rotterdam for 10 years as a department head responsible for, among others, the portfolios vulnerable - high-risk - youth, municipal taxes, supervision, and enforcement.

“I am excited that I can use my experience of the past year and a half in Statia and as a project leader in the role of deputy government commissioner,” said Toet.

“The civil service organisation has developed, in knowledge and skills, to be able to tackle the number of projects and the criteria associated with the restoration of the democracy.”

Toet admits that there is a lot to do and that the pressure is high. ‘Yet, I have every confidence that we will work towards better socioeconomic conditions in consultation with the Island Council and the stakeholders involved. I look forward to taking the next steps together with the government commissioner, the Island Council, and the civil servants. Together with Ms. Francis, I will do everything in my power to continue taking steps for Statia. This will be done in dialogue and with an open mind.”